I had no time between leaving Aspen, CO until after the Eclipse to paint, so this is a painting done after that event, but this blog post is of part of the journey to arrive there. 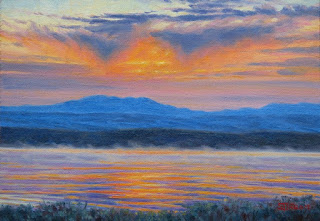 By the time I published my blog posting from Aspen, Colorado (the one before the Eclipse), it was 5 PM, and so I decided against going back up to the Lincoln Portal road and camping along the river, as I had thought of doing, and instead headed north down the valley, on my first leg towards the Wind River Range in Wyoming and the Eclipse.  North from Aspen the landscape is lower in altitude and so I rapidly found myself back in the sagebrush, pinion pine & juniper country.  Fifty-something miles down the road at The junction with I70 the road ceases to be 4-lane divided highway, as it narrows to negotiate through Glenwood Springs, and so I found myself in a traffic jam … did not expect that.

I pulled off to check the map and look up free campsites as I now had 4G internet.  In the end I decided to head 24 miles west to Rifle, Colorado, and spend the night in the Walmart Carpark, and resupplying in the morning.  This I did and then headed north from Rifle on State Hwy 13, towards Meeker, and west from there on State Hwy 64 towards Dinosaur National Monument.  Above Rifle is an interesting set of bluffs, but I really had no chance to get the right angle for a good shot of them.  Crossing the Colorado River at Rifle, one sees why it is named thus … full of earth red silt.  And west of Meeker the road followed the White River which had a definite milky cast to it.

Eventually I turned north onto a dirt road, County 73, and followed it about 6 miles onto Coal Ridge.   I had left Rifle late, and what with all the stopping to take photographs, decided to have an early camp here on the crest of the ridge.  I took a walk through the junipers and pinion pines, and upon my returning to my camp just off the county road, found a Winnebago parked on the road.  I heard voices down the road, and when their owners returned, it turned out they were a Dutch family in a rented Winnebago.  They asked me about the road conditions ahead (they had come from the north and I from the south), so I told them that the worst, was just down the hill.  Since they had just walked down that far, and weren’t worried about that, then I told them they should be fine; just to make sure that they turned left at the junction a mile down the road, and follow that to the highway four or five miles further.  They gave me two ice cold beers, and went on their way.  I could see the junction from the crest, a few yards from my camp, and saw that they made the turning OK.  Coyotes yipped and howled a bit later, and I couldn’t help but think they should have made themselves known, for the Dutch family; especially after they had come across me in the middle of nowhere, with my bear spray, sheath knife and revolver loaded with snake-shot on my belt.  I marveled that they had got on that road in the rig they were driving, but the road was marked on their map … it just didn’t indicate what kind of a road it actually was.  They will have stories.

That evening and the next morning I had been looking northwest across the valley below to Skull Creek Rim, twelve or more miles away, and once I broke camp I headed down to US Hwy 40, the way the Dutch had come, a few miles west along that, and then north on the Skull Creek Rim Road.  The dirt county road winds through the Skull Creek Basin, and climbs up towards the rim through the pinyon/juniper forest, eventually rising through a canyon until you find yourself on the plateau behind the rim itself, and a T-junction with County Road 16, which I took west.  Here is a broad expanse of rolling grassland, extending for miles, where I would normally expect to find Ponderosa Pines at that altitude.  Evidently the conditions are right for grassland more than Ponderosas.

By midafternoon I had met the paved road from the entry point of central portion of Dinosaur National Monument to Harpers Corner overlook, where the Green River flows 2500 feet below.  I saved that for the next day, went down to the Canyon Visitor Center of the Monument for information, and then two miles west to Dinosaur, Colorado, for petrol … and yes, Virginia, there is a small town called Dinosaur.  Retracing my route back up past the visitor center, I stopped at Plug Hat Butte for the views and a nature walk.  From here I could look across the intervening few miles toward Cliff Ridge, where was the primitive campground (no water, no toilets), that the ranger in the visitor center had told me about.

And that’s where I now headed … a distance of 3 or 4 miles as the Raven flies, but more than 25 by road, 10 or so on the usual dirt surface.  The campground recommended, was at a hang glider launch point (none in evidence), but I rejected it for lack of good trees, and headed three miles west on a 4-wheel drive road to Point of Pines, where I was in amongst a grove of Ponderosas an Aspens, and from where I had a good view from my clifftop campsite, well worth the 4-wheel drive.  To get to there I crossed into Utah, back into Colorado, and back into Utah, as the road wound its way across the plateau. There were Clarks Nutcrackers here, a quiet member of the Jay family.

Plug Hat Butte was visible, and down on the flats, fifteen miles or so away, the lights of Dinosaur winked on in the dusk, as well as those of Rangley, another fifteen miles or so beyond and slightly to the left of Dinosaur, from my vantage point.  As night deepened I could see the odd vehicle headlights coming north out of Dinosaur, and I wondered what road they were on.  In my introduction to my blog-site, I extoll the virtues of extensive landscapes without a yard light to be seen in the dark of the night, but just occasionally there is a magic about distant lights in the night … this was one of those times.  While I did begrudged the single yard light at the ranch three miles away (luckily it was mostly hidden behind a nearby young Ponderosa), the distant lights of the two small towns lent an ethereal quality to the night … perhaps because I was 2500 feet above it all, as a god in Valhalla might look to Midgard below.

Studying my maps in the light of morning, I saw that those vehicular lights were not coming north out of Dinosaur on some backroad, but northwest on US Hwy 40; made sense, considering the several per hour there had been.  That highway also bisects an interesting feature well scene from Valhalla Point of Pines; a sinuous thin sharp ridgeline a few miles long rising a couple hundred feet out from a flat plain, called Snake Jim Ridge.  This reef-like feature appears to bare no relation to the surrounding geology, but then I am no geologist … more’s the pity!

Even though there are no dinosaur exhibits in this eastern section of the Monument, the landscape is highly interesting and varied, from grassland plateaus, pinyon and juniper woodlands, deep red rock canyons with cottonwoods in their depths, and the Green and Yampa Rivers flowing and meeting up 2500 feet below the canyon rims.  So I stopped at the various viewpoints on the paved road out to the Harpers Corner Overlook, spotting Steamboat Rock far below at Echo Park, behind which lurks the junction of the Green and Yampa Rivers.  I declined the two mile long nature walk at Harpers Corner, since I wished to descend the desperate dugway off the high plateau through Sand Canyon, and on to Echo Park and the Green River while the light was good.  On the way down I stopped at some petroglyphs pecked into the canyon wall 1200 years ago, when the surface of the canyon floor was 35 feet higher than it is today … thus the petroglyphs are now high up on the wall.  Luckily the raking light was just right to make them out.  Down at Echo Park I pottered about, taking many photos, noted the campground for future reference should I pass this way again (water & WC), and noted the junction of the Yampa River with the Green, in the distance.  Like the Colorado is red, and the White has a milky quality to it, as noted previously, the Green is, well … green.


Leaving Echo Park I stopped at Whispering Cave, a shallow split in the cliff-face which once you stoop to gain entry you find extends both right and left deep into the rock, parralelling the cliff, and also rises through crevasses high above you, down through which there is a cooling breeze.  I expect that this breeze would not have been conducive to permanent habitation in days of old. A few miles back up the canyon, I stopped at the old Chew Ranch, sold to the Monument in 1966 by the third generation Chew after 56 years of homesteading.  This was still inhabited when I was a youth … food for thought.

A mile or two beyond I turned left onto the Yampa Bench Road, before entering Sand Canyon through which I had descended earlier.  This road I had thought about taking yesterday, but realized I would not be able to do it before nightfall, and so camped at Point of Pines instead … smart move.  It’s a desperate road, and while I needed 4-wheel drive only occasionally, it is not for your ordinary passenger car, but well worth taking if you have the ability to do so … many photo-ops, including views down into the canyon of the Yampa River.  I camped on BLM land a few miles outside the Monument boundary, amongst the Junipers and Pinions, where a curious little grey Plain Titmouse (Parus inornatus), hovered about in the branches of the Pinion above me, checking me out from all angles; I thought once he was going to alight on my shoulder to get a closer look at my supper preparing activities.  My first sighting of one of these, and very pleasant it was. And that was Thursday, day two of the Dinosaur National Monument, where I thought I would spend only part of one day to breeze through!