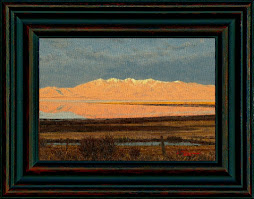 I wrote this post in May and intended to publish it then, but several things intervened; not least of which my automatic email notification service [Feedburner] was being eliminated by Blogger, and so you, my subscribers, were no longer to be notified of new Blog Postings. After much research, it appears that "Follow-it" will be my new notification service. This posting will be part of a test to see how this is working.

In the third week of December, last, Oregon was left behind as I headed for Colorado. My second day out I wound along the back roads between Klamath Falls, Oregon and Susanville, California. A few miles south of Susanville, on the road to Reno, Nevada, you pass by Honey Lake. It's a magnificent setting, surrounded by low mountains, as it is, and especially wondrous when the lake is still and calm and reflecting the mountains, as it was that evening. The mountains seemed to glow with an internal light of their own, rather than reflecting the light of the evening Sun. Of course we can argue whether it was, in fact, an evening Sun, or a late afternoon Sun, at that time of the year, since it sets well before 6 PM, but I tend to follow the patterns of light and dark, rather than the artificial man-made divisions of the day, when labelling my Paintings. It reminds us of a slower World, than that in which we now live; a time when the Sun … and Moon … and Stars … guided our lives, rather than the impersonal flow of electrical currents.

It was dark by the time I passed through Reno … celestially … but of course those pesky (or beneficial?), electrons were flowing fiercely throughout Reno, as I headed east.

Awhile back, I came across a blog post where a painter was extolling the virtues of the pigment Caput Mortuum. I had used it occasionally in Watercolour, where I might use it as a more purpley Indian Red. Now, in oil, since I've had an unused tube of Schmincke's Caput Mortuum for some years, I’ve broken it out and have begun to explore its qualities. I like the purpley darks I get with it when mixed with Ultramarine Deep, and the blue to red lilacs when mixed with Cobalt Blue and Lead White. These last mixtures seem to be useful in tertiary mixtures with brighter colours in the shadow areas. More explorations are forthcoming.

Pigments used in the painting were: