Monday was clear and cloudless, so I went to the Geology Museum at Yavapai Point, learned a lot about the Geology of the Grand Canyon, and listened to a most interesting talk.  I also began to get a handle on some of the mesas, buttes and geological features in the Canyon.  This knowledge was built upon over the next few days as I observed the Canyon from the various sections of the Rim that I visited.  One of the best walks was from the Bright Angel Trailhead along past the Geology Museum to Mather Overlook, but especially that part from Verkamps Visitors Center to the Geology Museum.  Along that section are a number of very good explanatory signs, and a series of rock examples from most of the rock strata in the Canyon.  The only improvement I could think of would be some signs pointing out the various named buttes, mesas and other features that one sees; that would help confirm the identifications I've been making.  I ended that walk near Sundown just short of the Geology Museum, where I watched and photographed the lengthening shadows at day`s end.  That night I left the Park to find a campsite in the Kaibab National Forest.  This was found 5.3 miles in on forest road 302, east of Tusayan. 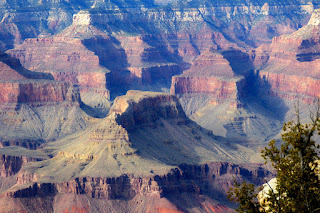 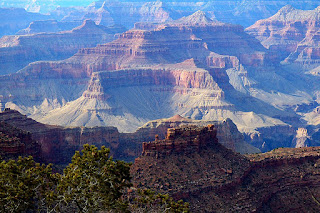 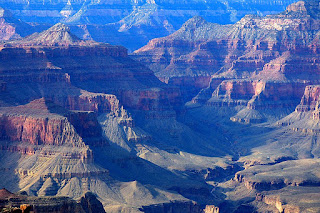 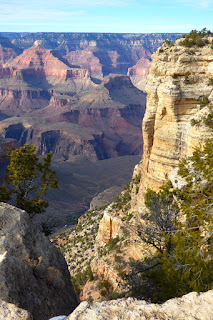 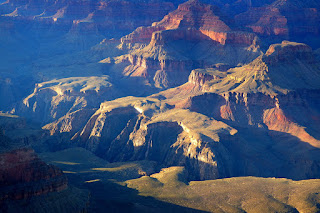 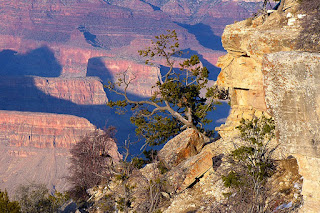 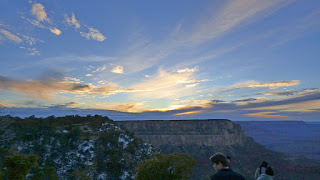 On Wednesday the 20th, I took the South Kaibab Trail down into the Canyon to get a different perspective, and to get a feel for these trails.  I only dropped about a thousand feet, and about a mile along the trail, but it was worth the effort.  A couple of mule trains passed me, going up as I descended.  I think they were resupply trains for whatever camps are down there; I should have asked.  That night I was back on forest road 302, but only two miles in this time, in a very good spot, where I stayed for the next three nights, spending my days, painting and taking hikes through the Ponderosa Pine forest. 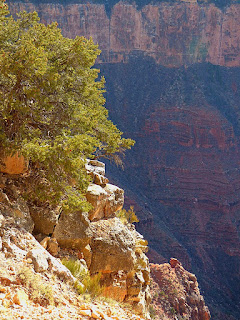 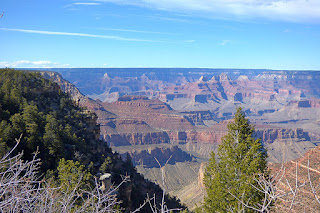 I came out on Sunday the 25th, and started out on the Desert View Drive, towards the east entrance.  I continued my identifications of the Canyon`s features; seeing them from different angles was a great help.  Back into the National Forest, this time on forest road 310 turning on to 307 about a mile in from the Desert View Drive.  On 307 I had to go through a barbed wire gate, which was lying open as the old gate post was broken.  This gave me a chance to use my hand forged Swedish axe, that was a Christmas present from my siblings.  I found a downed tree that had a section about the correct thickness of the damaged post, lopped off the branches, and cut it off about the necessary length.  The next morning as I drove out, I did a cursory gate repair; it was far from perfect as the wires needed some sorting out, and I do not have a fencing pliers, but at least I was able to close the gate, as the sign on it requested.  That should take care of it until the Rangers can get to it.  The day was one of passing snow showers, which made Canyon photography very interesting, and provided a perfect coda to my Grand Canyon experience. 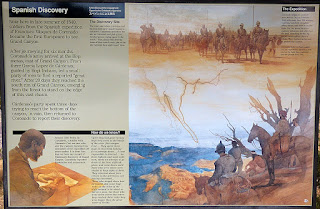 I left the eastern entrance to the Park and several miles down Highway 64, I turned onto the eastern end of forest road 307, the same road I had camped on the previous night, but about 20 miles to the east and a thousand feet or more lower, thus out of the Ponderosa zone and into the Pinions and Junipers, with the Coconino Rim beetling above me to the south.  Supper was cooked during a brief snow shower as the Sun was setting below the edge of the snow cloud to the west. While this is in the Juniper/Pinion zone, in the morning I noticed pockets of Ponderosas up on the Rim in shallow canyons.  These were reminiscent of the micro-climates within the South Rim of the Grand Canyon that shelter Douglas Firs, but this time the micro-climates were sheltering Ponderosas. 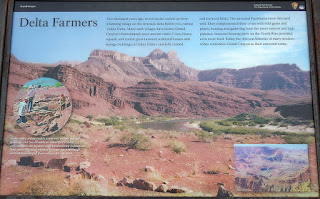 Posted by Not Quite a Painting a Day at 00:30 No comments: 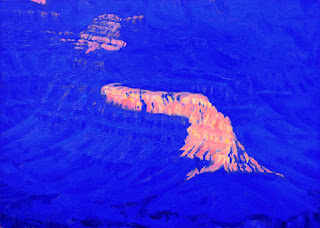 This painting is a tough one to reproduce on screen.  I suggest that perhaps you look at it with slightly squinted eyes.  The amazing blue shadows of evening and the complementary oranges of the light on the buttes and mesas within the Canyon are the subject of this almost abstract study.


Next morning … on to the Grand Canyon on a perfectly cloudless morning.  However, by the time I was able to get a campsite in the Mather Campground there, and got up to the visitors center, and watched the short introductory film, there was a lot of cumulus cloud, casting wonderful shadows across the Canyon.  I took a shuttle bus out west to the Hermit’s Rest and strolled back towards the east to Pima Point.  I found a rough footpath below the paved one and took that.  It was rugged and out of the wind, and even though only several yards from the paved path, had better views … makes you feel you have the Canyon to yourself.  By 16:30 you could see a front to the north, behind the cumulus, that portends the snow to come.  That snow came after 23:00 and only about three inches by Sunday morning, the 18th of March. 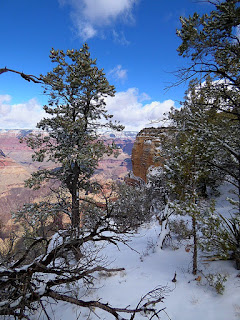 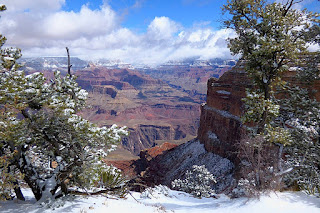 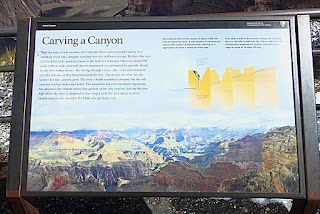 I let the falling snow lighten and when intermittent Sun began to show, I took the shuttle back towards Hermit’s Rest, but this time got off at Mojave Point and slowly worked my way back to the transfer point at Bright Angel Trailhead.  It was a day of increasing Sun with the odd snow shower sweeping past, and cloud shadows turning the Canyon into a light show.  I will let the photos speak for the day.  Towards the end of the hike, I was looking down on Bright Angel Trail, when I spotted a doe and a fawn on the trail across this side canyon.  A pair of hikers were slogging up the trail, and I paused to see what would occur.  The deer stayed on the edge of the trail, but kept their eyes warily on the hikers as they gingerly slipped past.  Then they went off trail on one of the slopes to graze … they must be used to the hikers if they graze that area.  I happened to meet the hikers at the shuttle stop; I had a feeling that they might be the two I had seen, and so they were … a couple from Belgium.

The clocks went forward to Daylight Savings Time, recently, but not in Arizona, which does not do DST, although the Navajo Nation, which straddles the Arizona/New Mexico border, does.  None of this really affects me, as I did not change my watch to Winter Time last Autumn.  I decided that by not doing so I would have lighter evenings during the Winter, and also be early for things.  Psychologically it worked for me, and I am toying with the idea of putting my watch ahead an hour to have a “double Daylight Savings Time!” I might just not change it when I transition back to the Pacific Time Zone from the Mountain Daylight Savings Time I’m on now, once I get back to Oregon. 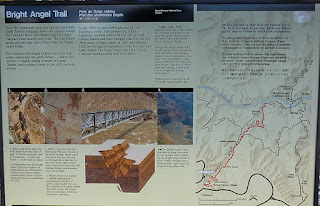 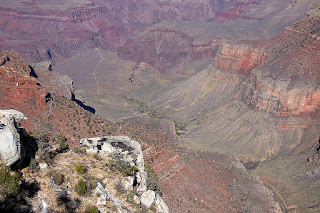 You can see the trail below, lower right, but it splits neat Indian Garden, the green oasis in the center, and that trail on the left goes out to Prospect Point, while the other descends to the right and the Colorado River.  It crosses the River and continues to the North Rim, still following the Bright Angel Fault.

Rublev: Orange Molybdate, Italian Burnt Sienna, & Lead White #2.
Posted by Not Quite a Painting a Day at 08:30 No comments: