After the Eclipse at Mosquito Lake in the Wind River Range, Part 1

Note: you have seen the two paintings I did at Mosquito Lake in the last two postings, North to Wyoming, Parts 1 & 2. 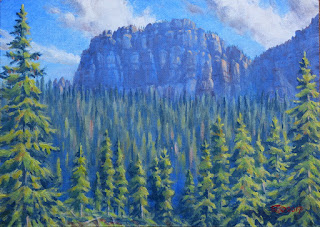 After the Eclipse I remained in my forest meadow all Tuesday, to give time for all those other eclipse watchers to head out from their camps and clear the forest roads.  I crept out on the Wednesday from my forest road joining the next forest road 5 miles to forest road 600, the Union Pass Road, much as a creek joins a larger creek to a river.  The various campsites that had occupants, when I came in on Saturday, were all gone.  The best thing about my meadow, deep in the mountains, was that only once during my time in residence did anyone come down there … a lone ATV with a couple exploring the forest roads.

At the junction with Union Pass Road I paused for a time studying my map, and decided to go west a few miles to check out Buffalo Meadow and then a few more miles to Mosquito Lake.  At the latter I found a campsite overlooking the south end of this shallow lake and the Wind River Range extending to the south.  I have a 180° view, including Union Pass 15 miles away, Union Peak (over which the Sun rises of a morning), the valley of the Roaring Fork (a tributary of the Green River), and the mountains enclosing Green Lake, beyond which arises the Green River itself; the Lake is out of site from my vantage point.

Here I have chipmunks, squirrels, coyotes yowling occasionally, various small birds (including Lark Buntings, first identified at the end of June at the Pawnee National Grassland), an occasional family of four pronghorn antelopes (two young), a pair of hawks of some kind, and the lake has several rafts of wildfowl and a pair of Trumpeter Swans, the first couple of days. Of the wildfowl, I have identified Cinnamon Teal, and Blue-winged Teal. Whereas the weather was absolutely perfect up to Wednesday, it has been mixed since then, generally sunny, but with cloud increasing during the days, and very interesting storms passing by, occasionally over me, but mostly off in the distance.

For you tech-heads the pigments used were:

M. Graham: Hansa Yellow.
Posted by Not Quite a Painting a Day at 17:28