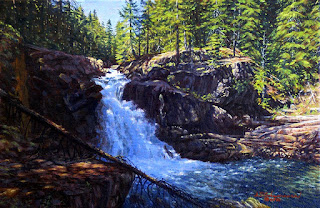 “The Deep Shadows of Afternoon on Silver Falls” 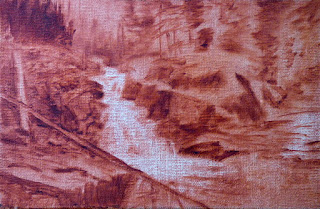 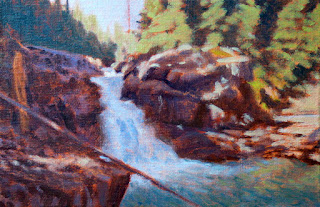 It's been too long since I last posted, but time has a way of getting away from you, when you're not looking. I see in my files that this post was begun in November and intended to be posted then, but ‘what the … hey?!’ It's going out now … finally!

This little Miniature was supposed to be entered into the Park lane MiniSmall 2020 Exhibition last Autumn, but I only got as far as the brush drawing on the panel (see above), before I realized I was going to have to frame and take the photos of the other works being entered, do the paperwork, and enter them on line. As it happens I pulled my first all-nighter, in many years, getting that accomplished. And that was well worth it, selling three during the show, and winning the Ampersand Landscape Award for fourth painting; the latter you already know. So after the Miniatures and Small Works were sent off to the Park lane Gallery, I finished up this one and , as stated, intended to post it here in November. I am offering this, at present unframed, Oil Miniature at a reduced price, from what it will be once it is framed and ready for future Miniature Shows. Once I frame it This reduced price ends and I will re-introduce it at a higher, but still reduced price. Once it starts going to the Miniature Shows, this offer will no longer be available.

But things moved off in a tangent. I spent part of November & December, having my annual check ups, with both my doctor and dentist (root canal … ouch! Not the physical pain, which was nothing, but the monetary pain), and getting equipment ready to drag a small utility trailer from some friends’ field, to store at my Sister's new mountain home in Colorado. She's dreamed of being there for much too long, and finally is there. I left Oregon on the 18th of December, and took six days to get there, staying off the Interstates and driving the small roads instead, avoiding the high passes in the mountains and driving sedately between 45 & 50 mph. We (The trailer & I), made it without incident. She and her husband will have the use of it, as long as it’s there.

While enjoying their wonderful views of the Sangres de Cristo Mountains, I worked on my accounts; did as much computer maintenance as I could, consolidating or eliminating files; photo-recon, and a lot of working on my those photos and older ones to put in my ‘reference photo folders,’ for future paintings. An old high school friend lives just 50 miles away from there as well, so I was finally able to visit him in spite of the bloody covid! So being side-tracked with all that, this post never got completed and posted … until now … ta daaaaa!

The fifth day after leaving that part of Colorado, I ended up at 8500' up in the Zuni Mountains of New Mexico. It was supposed to be an overnight camp, then because it was Good Friday, it behooves me to stay over the Easter weekend, thus avoiding traffic, and any crowds. Then I found a snowbank in a ravine, which supplied me with snow for my Yet I cooler, and water, after straining particulates out of it through my British Army Millbank bag, and the boiling it. I decided to remain as long as my supplies lasted, or the snowbank melted, thus allowing me to organize my gear more efficiently, do some paperwork, and get some painting done. That camp was almost The perfect campsite, half a mile off a main forest road, so I could hear the occasional vehicle, but nobody ever came down past my camp. The only downside is there was no cell connection, so I couldn't post this earlier. But it's been kind of refreshing having no connection, and thus no news (no car radio). That camp was closer to Grants, the second Zuni Mountains camp is closer to Gallup, and neither one had cell connection, and I haven't seen another soul for 26 days, until today … talk about your covid free environments!

These postings will be a bit more regular now that I'm sending my very slow way back to Oregon, painting all the way.

Posted by Not Quite a Painting a Day at 16:07 No comments: