Before I tell my eclipse story, I present one of the paintings I did while I was in England over the Winter. 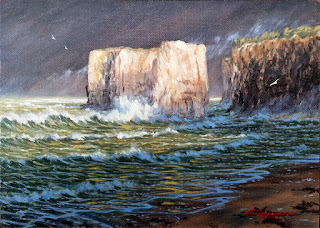 There was an eclipse of the Sun in 1999, and at that time I lived on the path of totality at Treyarnon Bay, Cornwall, England.  I planned for it.  I bought heavy duty neutral density filters, for my camera and a eclipse goggles for me; made sure I had batteries for my tape recorder as well as my microphone; made sure my watch was synchronized to Universal Time, which happens to be Greenwich Mean Time (Winter Time, not British Summer Time); went out to one of the bronze age round barrows between Porthcothan Bay and Bedruthan Steps (to be close to the Ancients, as well as closer to the centerline of totality), several hours early to set up.  As the morning progressed, people began to wander out to the sea-cliffs, singly and in small family groups or friends; I would not be alone while I made audio notes with my tape recorder.  The morning started out cloudless and beautiful, but as first contact approached, a band of cloud appeared overhead.  IT DID NOT MOVE, as expected, but remained overhead, blocking the Sun, while to both north and south, outside the path of totality, it remained cloudless!!!  The light began to dim, and get a bit weird, but still no Sun/Moon discs to be seen.  Finally it the darkness of totality rushed across the sea towards us and we were engulfed in darkness in the middle of the day.  There was sunlight down at St. Ives, 40 miles away to the south, and it was clear to the north up on High Cliff above Boscastle, and there were sunset colours on the horizon outside the circle of totality, but we were not treated to the ‘hole’ of the Moon surrounded by the Sun’s Corona.  Some teenage girls nearby screamed and shouted like they were at a rock concert when it went dark, but luckily other people nearby overwhelmed by the gravity of the moment shushed them, for which I was grateful.  After totality, when packing up, I was able to glimpse a few seconds of a crescent Sun through a thin section of cloud; I didn’t even need my eclipse goggles!  And that was it … the band of cloud remained until long after last contact.

Not so for the Eclipse of 2017!  Again my base in Oregon was on the path of totality, but I am not in Oregon; I am in Wyoming a few miles west of Union Pass in the northern Wind River Range, on the forest roads and 20 miles from the nearest paved highway.  I arrived on Saturday, and the journey from Lincoln Portal, above Aspen, to here will be covered in another post.  Even up here on the desperate forest roads there were loads of campers in forest, in their tents, camper vans, and even camper trailers!  I thought perhaps I had left it too late, but the deeper I went the fewer there were, until I found a clearing on a forest road, off a forest road off a forest road, all to myself … nearest neighbors .75 miles away.  A great site to camp, but on eclipse day I moved back up the road 1.25 miles where I had a view of the Grand Tetons 45 miles away, and in the direction from which the Moon’s shadow would come.  Morning of the 21st; Eclipse Day!  A couple of puffy clouds and a few wisps of high cloud in the early morning, but these disappeared well before time.  I arrived and set up my astronomy app on my tablet ready with five minutes to go before first contact.  Using GPS, the app was able to show me the state of the impending eclipse in real time.  I took a couple of photos of the distant Tetons; they were visible, but almost lost in haze.

All the following times are USA Mountain Summer Time which is 6 hours behind Greenwich Mean Time (or Universal Time).

10:19:09 - I detect first contact through my eclipse spectacles … a tiny bite out of the Sun-disc, as the Moon, begins its journey across the face of the Sun.

11:10 – by now the Sun is a fat crescent and the light on the landscape is noticeably wan.

11:22 – fourteen minutes to go getting dimmer, and it’s chillier, so I put on a fleece five minutes ago; a breeze has kicked up.

11:35-approximately – the Grand Tetons disappear! (Then during the eclipse they show up darkly silhouetted against the horizon sky).


11:36:09 – Totality begins; took photos of Sun’s corona; probably could not so easily have done this without my new camera (Panasonic Lumix fz70).  I did not perceive the star Regulus with the naked eye (the corona was much brighter than I had expected), but it showed up in my first overexposed photos … I had to under expose by 2-1/2 f-stops to get a proper shot of the corona.  Venus was brightly visible off to the west of the Sun, but did not see Sirius or the stars of Orion; I suspect some were visible, but a nearby tree blocked the view in that direction, and I did not have time to make the few steps to see … there is only so much time available during totality, and boy, does it go so fast!  A lone cricket began to chirp, or perhaps it was a tree frog.

11:39-approximately – Tetons back in the sunlight; overexposed in the photos.

13:01:24 – last contact of the Moon’s disc observed (through the eclipse specs, of course); by this time I had moved back down to my campsite.

And those were my eclipse notes.  The next day while looking at the forest meadow, I am camped in, through my sunglasses, I realized that the light was similar to the early state of dimming of the light during the eclipse, perhaps as first noted at 11:10, in my notes above.  I wonder if more dense sunglasses would give a sense of the light, as it was even closer to totality?  Would the wierdness effect be present?

Even here I was not alone.  There was a grouping of two or three trailers, about a hundred yards away on the edge of a grove of trees, which I suspect were all acquaintances.  They were not positioned to see the Moon’s shadow crossing the landscape from the Tetons.  Then there was a camper pickup truck down the road about 300 yards with a couple of people.  They were in a position to see the Tetons, if they so desired.  These neighbors were luckily in quiet awe of the event, with no pop concert shouting … I was grateful.

All in all this was worth the 843 mile meandering trek north from central Colorado to see, especially since there are so many other landscapes seen and yet to see that were not in my original plans of travel.  It would have been nice to have had clear skies back in 1999, for the Cornish eclipse, so I could have had better knowledge for this one, but I guess this was my once in a lifetime eclipse experience; unforgettable!  If you ever have a chance to see a Solar Eclipse, by all means I highly recommend that you do so.  It gives you a sense of the mechanics of our little corner of the Universe unlike any other event.