I had no time between leaving Aspen, CO until after the Eclipse to paint, so this is another painting done after that event, but this blog post is of part of the journey to arrive there. 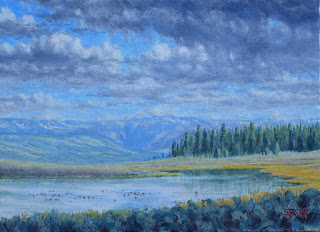 I ended part 1 of Heading north to Wyoming with; “And that was Thursday, day two of the Dinosaur National Monument, where I thought I would spend only part of one day to breeze through!”

And yet, I was not yet finished with the Monument, for how can you pass up a name such as ‘the Gates of Lodore?’  Sounds like something from ‘the Lord of the Rings.’  To get there, in the morning I continued on the county roads for thirteen miles to Us Hwy 40 at Elk Springs (a couple houses and a rest area), and on to Maybell and a petrol station.  From here State Hwy 318 is followed west forty miles or so (now north of the Yampa River), and then leaving the pavement, a gravel road is taken a few miles to the Gates of Lodore where the Green River enters the mountains.  It’s funny to think that just a few miles by river will take one to the meeting of the Yampa River with the Green at Echo Park, where I was yesterday, so many desperate road miles ago; there were two groups of rafters preparing to do just that.  The views of the Gates from the sand bank on the Green at the campground are good, but for the classic views of the river into the canyon itself, a mile stroll along a nature trail is well worth the hike.  Sadly the box containing the guides to the numbered points of interest was empty.  You know … I never spotted one Dinosaur the whole time I was in Dinosaur National Monument!  I, of course, expected them lurking on every horizon.  What a swizz (that is a ’jip,’ to the Yanks out there!!  Har! Har!


Now wasn't that really Lord of the Rings-ish?  Photos taken and lunch eaten, and I continued west on Hwy 318.  A few miles along from the Gates of Lodore, I attempted to cross the Green, to drive the few miles to one of the hideouts of Butch Cassidy, but the bridge has been closed to vehicle traffic, and an eight mile walk was not in my timetable.  From the highway one could see the canyon, and imagine the seclusion of the place, especially back then.


A few miles along the road enters Utah, and the pavement ends and becomes gravel and intermittent with pavement for the forty or so miles to its junction with US Hwy 191, which I took north through Rock Springs, Wyoming, topping up with petrol and ice, to Farson.  Turning northeast here onto State Hwy 28, forty miles brought me to the famous South Pass.  Here this broad pass, at the south end of the Wind River Range, saw thousands of emigrants pass through on the Oregon Trail, including the Mormons on their 1847 trek to the future Salt Lake City.  One can still see the wagon ruts in places.  A few miles on I left the pavement for the forest roads, and five miles in, camped for the night, on forest road 309.

The next day, Saturday, I passed through Lander, on US287, stopped into the ranger station there, picked up some free eclipse info and eclipse glasses, topped up with petrol, and continued on to Dubois, seventy miles further.  Here I strolled around this decidedly western town (with hitching posts in places), topped up with petrol again, and a bit of dry ice to make my normal ice keep longer, and headed into the Wind River Range over Union Pass, and the eclipse in two days time, and that you already have read about in my last posting.