Camping above Sagebrush Flat & distant view of the Tetons. 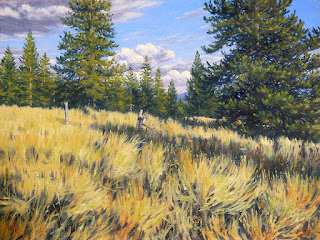 Note: the painting is not yet signed in the photo above, but will be soon.

Sunday: the second smokeless day in a row!  Hope it keeps up.  Even though there was some cloud about, and a few droplets that developed into nothing, I was able to top up my AGM battery, with my suitcase solar array, from 78% to 91% capacity, by days end.  It seems to have still slowly charged even during a lengthy, cloudy spell; I will have to keep an eye on that to see if that truly is the case.  Got some photo processing done in the morning, which brought my battery down to 77% before I set up the solar.  I would have set it up earlier, but it really was a cloud cover at that time.  Then got started on a small Oil in the afternoon.  By sunset the cloud had dissipated, and the silhouette, of the Tetons against the twilight was absolutely lovely.  And now, the stars are out and I’m watching Scorpio slowly sinking into the southwest, as I earlier watched Jupiter disappear behind the South Teton.  Saturn is between Scorpio and Sagittarius, which is trailing the Scorpion.  M7, an open cluster off the tail of Scorpio, touched the summit of Mount Leidy, and then slid down its western slope, eventually disappearing behind the western spur.


Monday: an almost cloudless day … all day.  There was a slight haze before day’s end, which I believe was smoke, according to my throat.  Jupiter set dim and red for the last few minutes, during which time I used binoculars.  The stars are bright, but not quite as bright as last night, but wonderful nevertheless.  I spotted Jupiter when twilight was still quite bright, and as I was enjoying the afterglow a bright meteor fell into the still bright West … it would have been spectacular if it had fallen in the dark after twilight’s end.  I have never seen a meteor against that bright of a sky.  Another painting completed today, inspired by yesterday’s early morning cloud shrouding the tops of the Grand Teton and Mount Owen, but with a bright middle distance, full of sunlight and foreground in cloud shadow, throwing the bright area into relief against the shadowed Tetons.


Wednesday: A dawn rain cleared the atmosphere, displaying the distant Tetons to at their best since arriving at this campsite.  The day was then clear enough to put out my solar array until about 15:00, when the showers that had been passing by to north and south finally headed my way; I got the solar put away just in time.  Almost finished the next painting of “Evening Sage,” but will finish it in the morning.  Showers are expected tomorrow as well.

The photo sequence in this post, shows how a few days in one place allows me to get a feel for a place, and all the variations in lighting and weather that I experience, and that may lead to further paintings.

Friday: Snow in the mountains forecast, so I’m heading for Jackson Hole and the Tetons.  But first I went to Lily Lake, a couple more miles into the mountains from my campsite, and took a few photos from inside my truck … an anti-rain tactic.  Then back out the nine miles to the highway, filled my water bottles at the campground there, and stopped into the Ranger Station a quarter mile up the road to pick up a vehicle use map of this National Forest … then on into Jackson 35 or so miles down the road.  The rain stopped on the way there.  I spent the afternoon in the library, after which I spent about half an hour getting a feel for the historic downtown area.  Superficially it reminded me of Aspen, but I never got to walk around downtown Aspen, since I never found a parking place.  I got the feeling, even from the confines of the driver’s seat, that Aspen was a bit ‘snooty’, as someone I met here in Jackson said … I agreed.  Jackson is a bit smaller, but has a lot of Galleries and interesting shops, and the people seem more laid back … not poseurs.  I may be doing Aspen a disservice, and perhaps I may someday get the chance to rectify my impressions.  But they are different places when all is said and done, and both do seem to have their own sense of community.

There will be a few days until my next post as I will be painting and photo-reconnaissance of the Tetons and Yellowstone, before I move on south.

The pigments used were:

Rublev:Blue Ridge Yellow Ochre, Ercolano Red, Purple Ochre & Lead White #1.
Posted by Not Quite a Painting a Day at 23:00