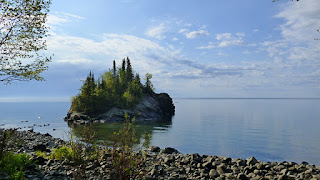 The Canadian border is less than 20 miles from Horseshoe Bay, but it's not that which interests me, but the Pigeon River which forms the border here, between Minnesota and Canada, and the High Falls (and coincidentally the highest in Minnesota), upon that river.  This river has history written all over it.  It was this river, only 27 miles long that led to the series of lakes and streams that provided the way into the interior of Northwest Canada, and thus the fur trading highway that built Canada [as an aside ... I've always thought that the Canadians made a mistake, last century, when they chose the Maple leaf as the symbol for their national flag; the Beaver would have much more apt ... I mean, whoever built a Nation with Maple leaves?].  But the the first few miles of the Pigeon is blocked to canoe travel by a series of waterfalls and rapids, of which the first is the High Falls, a couple miles from where the river discharges into Lake Superior.  Thus Grand Portage (just a few miles down the coast from the Pigeon), became the natural place for a transshipping point at the beginning of the 9 mile portage trail that bypassed the first few miles of the Pigeon.  Here it was that the French Voyageurs from Montreal (known as Montrealers), in their 30' birch-bark, freight canoes, with their 8000 pounds of cargo, rendezvoused  with the Voyageurs (known as Northmen), from the far interior, in their lighter, 20', birch-bark canoes still capable of transporting 4000 lbs. of Beaver pelts.  Here they rendezvous once a year, mightily partied-down, then went their separate ways; the Pork Eaters (another name for the Montrealers), back to Montreal with the Beaver pelts, and the Northmen back northwest into the interior, with their loads of trade goods to trade for Beaver pelts.  Etienne Brule almost certainly stood on the eastern shores of Lake Superior by 1608, and I like to think that some unremarked Frenchman stood on these Minnesota shores of Lake Superior by the time the Pilgrims landed at Plymouth Rock in 1620.  I arrived at Grand Portage at closing time for the stockade and buildings making up the replica transshipping post of the early fur trade of 1793, but there is still much to be seen.

The earlier part of the day was spent at Grand Portage State Park, on the Pigeon River, and of course going to see, and of course photograph the the High Falls.  I spent more time doing this than I had planned, because there was a certain amount of time wasted while sheltering from rain showers under trees, and even in a loo during the one really heavy shower.  I finally did get the photos I wanted of the High Falls, even though I had to retrace my steps several times, due to the rain. 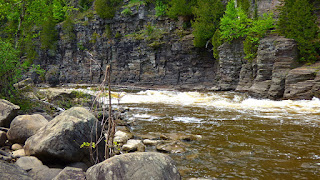 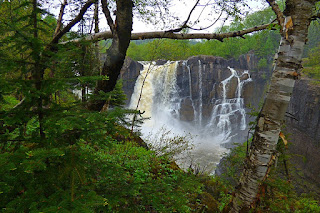 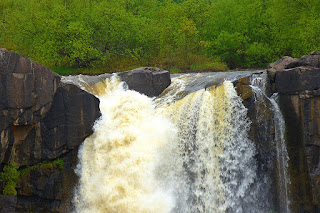 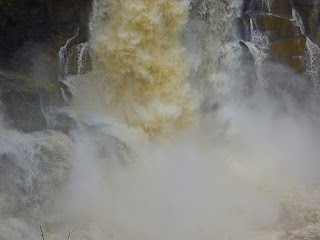 The Horseshoe Bay campsite was again unoccupied, thus I was able to have a leisurely evening over supper, watching fog banks come and go out on the lake, and finally the Moon rising through the mist.  This would be my last night Up North, and I enjoyed it to the full.

The Cascades of Cascade Falls 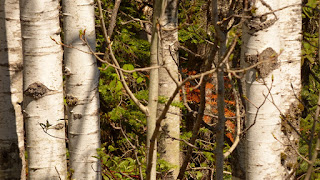 This journey Up North has turned into a photo-recon mission of the North Shore Waterfalls, as I familiarize myself with the new camera, and reacquaint myself with familiar landscapes.  After taking a few photos from the point at Esther Lake, I left my bijou, buggie campsite (although I will admit the pesky creatures were quite lackadaisical this morning), and headed down the Arrowhead Trail, then south through Grand Marais to the Cascade River.  Here is to be found Cascade Falls, with a series of smaller falls beyond known as the Cascades (but of course).  In the several times over the years I have visited here, I never realized there was a differentiation in the naming of these falls; I always considered the whole series to be "Cascade Falls."  Now that I have become aware of this, I can see that why thereof.  When looking upriver at the Cascades, you see a series of smaller falls within the gorge, and it no doubt would be a task to give each one names, such as: lower middle falls, middle middle falls upper middle falls ... you get the point; best call them the Cascades and be done with it!  But I never had a problem calling the whole series of them "Cascade Falls," either. 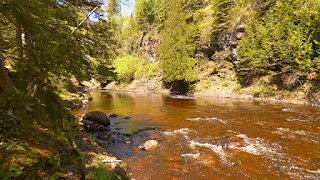 Much to my surprise I spent six hours here on photo-recon.  I could spend several days just here, drawing & painting, as there are so many different vantage points and intimate views, and the variables in lighting, as the Sun moves through the day, makes each of them a different painting for almost every hour of the day; factor in the seasons, then a year here would be well spent.  But my time is limited in my beloved Northwoods; I must soon move on into the West painting and drawing over the next few months on my way back to Oregon, and so I will let the photographs tell the story. 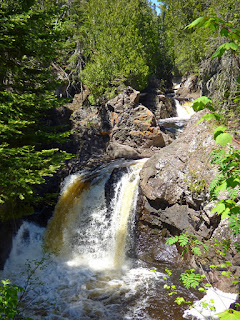 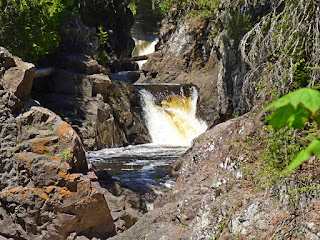 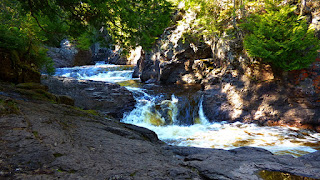 I was prepared to head back up the Arrowhead Trail and try out the small campground at Devilfish Lake, not far from last nights Esther Lake campsite, but the Horseshoe Bay campsite was unoccupied, and so I saved myself some petrol, by not having to drive into the interior.  Early enough into camp to be able to have supper finished by sundown, and to enjoy the evening Moon over Lake Superior.

Posted by Not Quite a Painting a Day at 23:00 No comments: