Still in the Valley of the Gods. 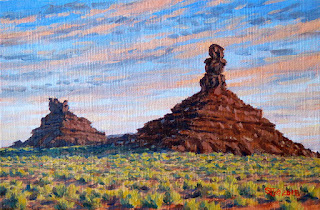 I switched to a new campsite on Friday night, after photo-recon throughout the afternoon.  The late afternoon sun was warm, and the night warmer than many a day.  I’d been hearing weather reports for a couple of days, one from Flagstaff forecasting snow beginning at 6 AM, Saturday, the other from Salt Lake City for snow as well; Flagstaff lies roughly 200 miles to the southwest, and Salt Lake City about 300 to the north.  Saturday morning was overcast, still warmish, but by afternoon the wind was picking up, and out of the northwest.  During the day I went down to Mexican Hat to top up with petrol.  They assured me that we would get only a dusting, if that, but up on top of the mesa up Moki Dugway, there would be more, but not even a couple inches.  “We are in a bubble here; the weather goes around us.” One of the women said.


I went up Moki Dugway, and then left to Muley Point, where I thought I might find a snug campsite tucked away among the Junipers & Pinion Pines somewhere up there, but the wind was quite strong and cold, so I decided to go back down to last night’s camp.  The wind had picked up down there as well, and too strong to use my little stove.  I thought that at sundown it might ease, and sure enough it did, and a cold supper was avoided.  The cloud also cleared away, but by Sunday morning it was windy with a vengeance, and there was a very light dusting  of snow, here and there in patches (had to look hard to see that it wasn’t frost), and up on the clifftops, a thousand to 1500 feet above there was more of a covering.  It was generally clear, and the Sun melted it all off, even though it remained cold.

I got on with my third painting, in Valley of the Gods.  Some kind of Hawk patrolled the wash below my camp, a flock of Scrub Jays chirped past, and another time Oregon Juncos worked their way through the few Junipers nearby.  Funny how you can go for a whole day seeing no birdlife, except the usual pair of Ravens that always seem present, and then the next day, seemingly loads a’ birds appear.

Thankfully by sundown the wind dropped enough for me to cook supper under the Winter stars.  In the northwest Vega was setting, with Deneb soon to follow, while in the southeast, Orion, was lying on his back, and below his feet Lepus, the Hare, had cleared the horizon, and then Sirius, the brightest of Stars, popped into view above the mesa top … one minute nothing, and then ‘pop,’ there was Sirius.  After the cloud of yesterday and the snow flurries had passed away, the heavens were especially clear, and the Winter stars achingly bright.  What modern man has lost!  Seeing these myriad stars night after night, and becoming intimate with their ways was something we were all familiar with, once upon a time in the long ago.