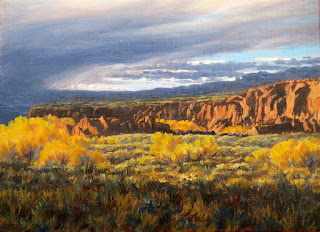 I meant to get this posted on the 16th, but it was President's Day, and the library was closed, and I also dropped over the Mogollon Rim, to lower ground to avoid a blizzard ... in Arizona of all places!

Chaco Canyon is a bit overwhelming.  Just the number and size of the ruins within the canyon and surrounding area makes it so.  This is not surprising when one considers that this was the center of the Ancestral Puebloan world.  Hovenweep was an outlier of this culture, as were the cliff dwellers of Mesa Verde, Lowry Ruin … I could go on.  In the literature, these people are also known as the Anasazi, which term has fallen out of favor, as it was a name given to them by their enemies, and which in fact means ‘enemy.’ 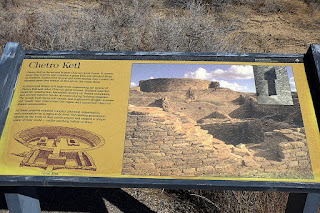 These structures were built between 850-1200 AD, and were not primarily dwelling places, but part of a ritual and sacred landscape.  If they had been primarily used for dwellings, there would have been room for a large population, of tens of thousands, but it is thought that the population of the greater Canyon area, was at the most, two thousand people, some as caretakers of the large edifices, and the rest in the small villages that dot the canyon floor, as small mounds of rubble these days.  These latter would have been farming and perhaps supplying the caretakers. 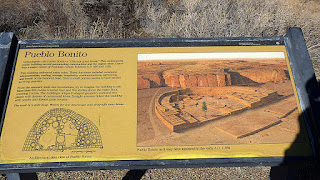 Periodically, perhaps annually, thousands of people from throughout the Chacoan world would gather here and occupy much of the available rooms within these structures.  These gatherings were part religious festival, part trade fair and part social intercourse.  Many of today’s tribes trace their ancestral lineage to peoples who gathered here; kind of like a Chacoan World’s Fair, with different local customs and languages.  I suggest you Google up more info, at your leisure. 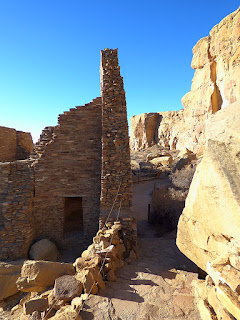 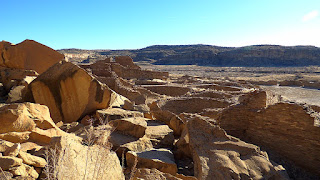 As I said at the beginning, Chaco Canyon is a bit overwhelming, and this also applies when considering how to tackle this place in paint.  In one of the novels, of Michael & Katherine Gear, set in this Chacoan world, one of their characters says that the canyon landscape is grey.  I could see that; the canyon walls are made up of light yellow and red ochers, but with nowhere near the depth of colour that I got used to up in Utah’s canyon country.  The vegetation is also very greenish grey, so much of it being Black-brush, especially at this time of the year.  The various Great-houses also blend into the cliffs, when seen from any distance, their straight walls, entrances and windows being the only man-made give away.  So for me, I see that treating these ruins as part of the canyon landscape, such as in the painting at the top, or as an abstract compositions of light and shade of parts of the architecture, similar-ish to the Hovenweep painting in my last posting.  Colour does appear with the early morning or late afternoon light, glowing on the cliffs, and so when I saw the threatening skies, on one of my days in the Canyon, I decided that was the way to go.  I also noticed all the Winter Cottonwood trees in the wash, and gave their barren branches, leaves of Autumn gold, thus making it an autumnal scene, even though I am here in February.  Hey! I’m an Artist, not a photographer, so I can do this.  Well, there you are, then.