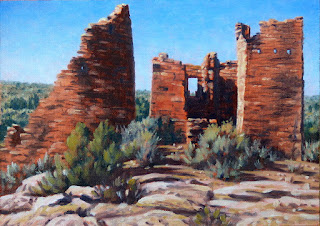 Besides the main unit of Hovenweep in Utah, the other units are to be found a few miles away into Colorado.  Two of these are down the first dirt track on your right after crossing the State line.  I went to the farthest one first, the Holly Unit, after my second circular walk at the main unit.  It has some interesting remains, including a tower on a boulder within the canyon, and one set on a rock which had tilted away from its original position, spilling most of it into the canyon, but the lower part of one of the walls still stands at an angle, testifying to the quality of its construction.  There are also petroglyphs a bit further on. 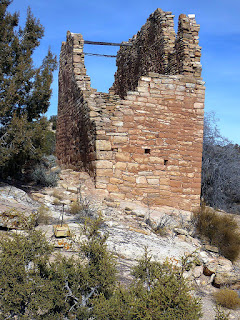 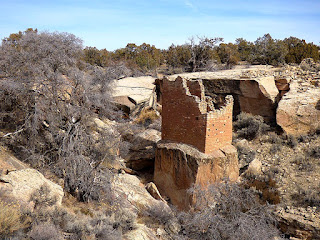 There was no one about, so back at my car I had lunch, then stripped to the waist in the 50°F weather, and gave myself a haircut, beard trim, and a dry shave (ouch!), as I had no hot water in my thermos.  After this I still had time to stop at the other unit on the way back out to the blacktop.  This unit consists of the Horseshoe Tower and House, and farther on in the next canyon, the Hackberry House, so named for the several hackberry trees thereabouts.  At this latter there are the remains of a dam on the clifftop, hard by the ruin, which guided rainwater into the spring below the cliff.  I camped for the second night a few miles farther on and about a mile left down a dirt track.  Here I had caught a glimpse of the Super Blue-blood  eclipse of the Moon, that morning, before the cloud obscured it! 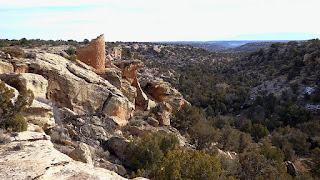 The most delightful setting of all these units of Hovenweep is that of Cutthroat Castle.  I must point out here that none of these buildings could really be thought of as a castle, nor to our knowledge did they fulfill the raison d’etre for one in the European sense.  But I have digressed.  The setting for this village is lovely, set into an intimate canyon, and surrounded on all sides by pinyon pines and junipers with a few Cottonwoods on the valley floor.  I expect that it was not like this when this village was thriving, but more cleared for the growing of their corn, beans and squash.  But in the present day it is quite wonderful. 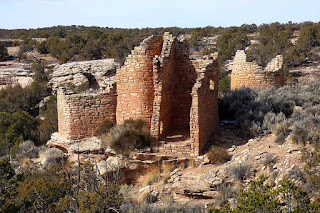 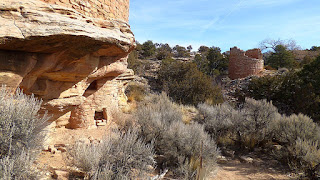 At the beginning of the mile long trail I came upon a gauze bag with a gold necklace with a pendant, tied with a lilac coloured ribbon.  I could see a price tag of $49.50 within; I expect it was gold plated at that price.  At first I thought someone had lost it, but then I spotted that it was within a circle of salt (I tasted it).  Then it became obvious that it was an intentional offering.  I have a pouch of good Danish tobacco, that I purchased in Iceland on my 16 hour layover there last February, so I took a good pipefull of that and left it next to the bag with the gold necklace.  I have never smoked per se, but occasionally I have smoked a pipe of good tobacco, while camping.  When I say occasional, I mean just that; I believe the last pipefull was in the Boundary Waters of northern Minnesota in 1993, or possibly it was 2000.  So far on this journey I have not had a campfire smoke, but I have left a few offerings here and there, out of respect for those who have come before.  I do not believe in spirits, but I do like the thought of the continuity of life, and acknowledging the past, even while we look forward to what is to come.

From here I visited the Lowry ruin, easily accessible from Cortez, CO, twenty miles away, and then down to the Sand Canyon Pueblo, within the Canyons of the Ancients.  Both of these are outliers of the Chaco Canyon culture, down in New Mexico.  I spent the night on a ridge west of the Pueblo by a few miles, and next morning resupplied in Cortez, and stopped by the library to set up the last few postings, and then on to Chaco Canyon, where I am, in fact, writing this post. 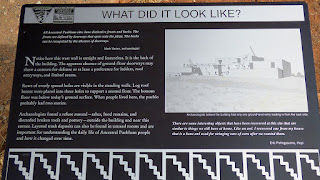 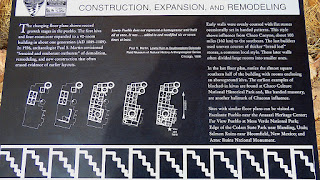