(Note: This was supposed to go out several days ago, but the Blanding Library Wi-Fi was down last Friday!  Now I am in Cortez, CO, for a couple of hours.) 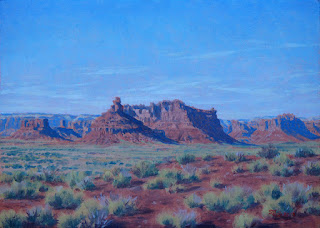 While preparing to head up to try to find Monarch Cave, it was surprising to see a vehicle pass by out on the Butler Wash Road; I had not expected to see anyone today, being a Monday, but since it was Martin Luther King Day, perhaps I shouldn’t have.  None of these trailheads are marked as to what they are leading to, so you have to take good care to watch the mileage to the little side roads that lead to each trailhead.  As I approached what I thought should be the correct trailhead, I spotted the car that had passed me earlier, and it was confirmed that this was indeed the correct one.


The couple whose car it was headed out on the trail, and I followed along once I got my gear together.  Another couple pulled in and headed out before me as well, so a solitary day at Comb Ridge was not to be … probably a good thing since I would not have been sure I was on the correct trail.  It was about a mile in, perhaps a bit more, and mostly in the Canyon, and so colder than I expected.  It is interesting all the micro-climates one encounters in these canyons; frosty vegetation, and frozen trail, but a few feet farther on warm enough for a soft footpath, not necessarily yet touched by the Sun; perfect walking weather, for me, as I kept warm through the exertion of the trail.


Monarch Cave is really a cliff dwelling within an alcove, and was much farther into the canyon than I had expected.  It is approached up sloping slabs of rock then along the original moki footholds, some of which have been warned away.  The others were up in the ruin when I arrived at the bottom, and were coming down.  The first couple headed out straightaway, for House on Fire on the way to Natural Bridges National Monument, which I visited back in 2013.  The second couple told me about Moon House up Moki Dugway, and north about 10 miles and then about 8 miles east, showing me photos on his phone.  It looks really interesting … hope I can find it.  They also found an ammo box below Monarch Cave with a guide to the ruin, and a guest book.  After they left I steeled myself for the scramble up … I got up to the level of the dwellings, and made my approach, but the last eight feet was on a very narrow sloping ledge.  I did not trust my boots not to slip; I was defeated. So I gingerly backed the few steps to where I could turn around, which was a bit nerve-racking of itself.  If I had slipped on that last approach to the ruin, it probably would only have been scrapes, bruises, and maybe torn clothing as I slid down the steeply sloping slabs, and into the brush.  Retreat was the better part of valor.  I took some photos from the level of the ruin, and more from below, and then read the guide from the ammo box.  The cliff dwelling was thought to have been built for defense, rather than comfort.  I had been wondering about the lack of Winter sunlight, even in the morning … of course Summer would have meant afternoon shade.  Oh! There were lots of pieces of pottery and stone implements, and even some thousand year old corn cobs lying out on flat stones for display (leave them where you find them, please).


After lunch Wolfman Panel was the target, the first antiquity one comes to from the south.  I had been told that it was a short walk, and it kind of was, but it is a bit of a desperate trail, once you come to negotiate the descent into the canyon up the other side, to where the Wolfman Panel and (surprise, surprise), another ruin is.  The descent into the canyon is along a sometimes narrow ledge, which in one spot squeezes between a large boulder and the cliff face.  I had to turn sideways to get through.  Where you make the final descent to the canyon floor, there is an alcove within which there appear to be remnants of buildings.  There is poison ivy at the back of the alcove, in vine format, which I recognized from a growth in similar situation at Mesa Verde.


Now down to the canyon floor, then along it for a ways, and then I thought I was stopped as the trail descended sharply, five feet, through a thicket of willows to the creek (about 4-1/2 feet wide at this point), which had a frozen surface.  The other side went up as steeply as this side, and the willows were like a wall, so I did not have the confidence to jump it at the inclines involved.  I followed a fainter trail and again came to another crossing, but this one was narrower. So, I did jump this one and then it was a jungle of willows, turning to reeds, and finally into the open.  This led to an extremely steep, slidey ascent of about twenty feet.  Once negotiated the ruins were not far off. 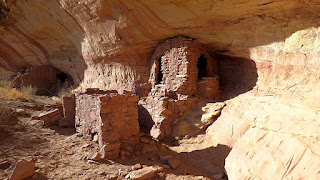 The ruins are not exceptional, but all of these dwellings have a certain interest, nevertheless.  Again it appears that there were a couple of actual dwelling spaces and the rest for storage.  Now that I have seen a few of these, I do wonder about the flooring.  Were they once leveled, or if not, is that diagnostic of storage spaces, where the pots and baskets, might not necessarily need a level floor?

There are places on the cliff wall that appear to have been used for grinding stone tools, and other spots for grinding grain or corn.  Then there are a certain number of petroglyphs, one of which is the Wolfman Panel.  If I got it right it is quite small, and isn’t a bloke with a wolf’s head, but a little guy with lots of claws; I will have to look that up when I get Internet access.


While wandering about, a tiny lizard came out of a crack and into another; I just missed a photo.  Now it’s January, but this alcove is in the Winter Sun for most of the day, and so is quite warm.  This contrasts with the frozen Creek not 50 feet below within the thickets of willow.  Upon leaving I descended the way most people enter and leave, and the descent is quite trying, but not as bad as if I had attempted the trail back the way I had come.  This way, however, did bring me to the frozen Creek crossing I had originally rejected.  Once I got down to the creek, through the willows, I probed the ice with my stick and it appeared quite solid.  I stepped onto the ice next to the shore and jumped to the ice next to the far shore, and that was that; it might have taken my weight even in the middle.  In any case it would probably not have been deep at all, but I didn’t want even a wet boot.  Micro-climates … warm enough at the ruins to bring out a lizard in January, but 50 feet below, a frozen creek!

On to Mexican Hat, where I refilled my four water bottles, thanks to the kindness of the guy in the Shell station, then back seven miles to the road into the Valley of the God’s.  My campsite is about four miles in.  The evening light was Grand and a good sunset ensued.