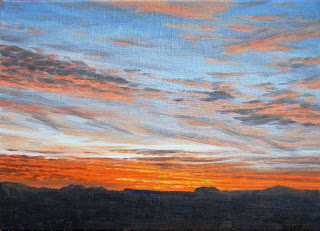 The second of two sunset skies studies I did while in Canyonlands National Park.

Butler Wash Road extends for 21 miles below the eastern slopes of Comb Ridge about 5 miles west of Bluff, Utah, and I am camped at the trailhead for the Crane Petroglyph Panel, two miles up from the southern entrance.  Thus I have not moved very far today.  The trail to the panel is indistinct across the slabs of rock, there being no cairns that I could see, but the occasional footprints that I found in the sandy spaces all lead towards the left-hand Canyon one sees from the trailhead.  I thought I was on the on another trail, but I met a couple from Grand Junction, CO, that pointed out the petroglyph to me, which I observed through my binoculars high on the cliffs above.  You can scramble up a ledge to get a closer look, but I wanted to find the trail for the Double Stack Ruin.


That trailhead is a further 1.8 miles north and is marked by cairns across the slabs of rock you encounter, once you have negotiated three deep channels of Butler Wash.  Once across the slabs (about 250 yards), the trail descends into the canyon that eventually leads to the ruin, after meandering through the undergrowth on the canyon floor for a little over half a mile.  On the way the Canyon divides, and the left-hand fork is the one to take.  The Double Stack Ruin lies in an alcove in the north Canyon wall facing to the south.

It gets its name from the fact that one part of it (probably a granary), perches on a shelf of rock about 40 or 50 feet above the Canyon floor, and the main buildings of the ruin lie perhaps 25 yards further on, just above the floor.  There look to be 2 or 3 living spaces, and the others appear to be storage units.  When I think of a granary, I tend to think of a silo filled with grain, but I suspect that these storage spaces were not filled that way, but the foodstuffs stored were in baskets and Pots.  On the other hand it could be conceivable that some were filled with loose cobs of corn.  My thinking of the use of baskets and pottery jars would help to keep the mice at bay.  The granary up on the high shelf is approached along an ascending shelf of rock, which must have been a bit easier to negotiate a thousand years ago.  There might be some climbers today that might be able to scamper along that ledge, but I would have to see it before I would believe it.  I wonder if they sent one or two guys up there and the raised or lowered the storage pots by rope to fill it.


When you enter the Lower ruin precinct there is a decent sized tree trunk embedded at each end within the masonry, at about waist high.  I was wondering what that might be for, when I spotted the tops of pilasters forming a circle, and I realized it must be a Kiva, and the tree trunk was the main roof beam, the lower part of the Kiva Being filled with collapsed rubble.

On the trail to the ruin, at two different spots I passed two pole wickiups, of indeterminate age.  They could be anywhere from a few years to perhaps scores of years.  Just the poles remained in teepee like shape, but all the weather proofing materials of grasses and duff had long since disappeared.  Here are a couple of photos of similar structures in Larry Dean Olson’s, “Outdoor Survival Skills.”  It was interesting to see this sort of shelter in the flesh, as I have only seen them in pictures; kind of like finding an old trappers cabin, in the Northwoods, or the mountains.  And so … to camp, which is on a peninsula angling out into the wash, and as I said at the beginning, the trail to the Crane Petroglyph (also known as ‘Big Bird’ panel), begins here.

Rublev: Ercolano Red, Purple Ochre, Lead White #2.
Posted by Not Quite a Painting a Day at 12:00