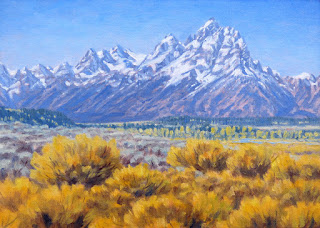 As you know from a previous post, I finally trundled into Jackson Hole on Friday, September 15th and immediately had a dusting of snow on me that night.  I mean, one day it’s 80°F and a couple of days later it’s Winter with snow falling and below freezing temperatures at night.  I expected it all to pass over within a few days, but heavier snowfalls occurred a couple more times during the following week, one of which I wrote about.  I spent all of the following week in the library, catching up on photo processing & filing, blog-work, emails and assorted PC work.  I also dabbed about town checking out the  Galleries & Shops, even though it was mostly just window shopping; I managed to get an offcut of leather for free, to make a case for my fork, knife & spoon set, that I have had since I ‘were a wee lad,’ the case for which has finally been falling apart, and has been held together with duct tape for the past 18 months.  Could I find a case that i might adapt for the purpose?  Not in all these months.  Now I need to find some time to work on it.

Even though the library took up so much time, I was able to get a certain amount of photo-recon accomplished, while to-ing & fro-ing from my campsites up above Curtiss Canyon & town, and also in the mornings around camp.  Curtiss Canyon is on the eastern side of Jackson Hole, and thus in the Gros Ventre Range (pronounced ‘Gro Vaunt’, in these parts), and with views of the Tetons across the valley.  Now that I’ve finally begun exploring the National  Park itself, with extensive photo-recon, and painting, I am even more impressed with the area.  The Teton Range is one of the finest series of peaks that I have seen, reminiscent of the Swiss Alps; only the High Peaks of the Wind River Range on the west side might compare, or perhaps the Sierra Nevada of California, which I’ve not yet seen.

And there is wildlife to be seen too(!): Bison, Elk (the same as Red Deer in Europe, although ours are larger … in Oregon, larger still), Pronghorn Antelope, and one cow Moose.  Oh, and wild people too who brake suddenly and swerve to the side of the road, without warning, leaping out of their vehicles, cameras in hand, to click away at the hard-pressed wildlife studiously ignoring the clickers.  I have clicked away myself, but have pretty much avoided the sudden braking and swerving … I have usually seen the hap-hazard parking along the roadsides well in advance for me to sedately slow down and calmly choose my parking spot for my clicking endeavors … many times without needing to leave my vehicle.  I have heard coyotes in Curtiss Canyon, but have yet to see them or the Wolves or Bears that make this area their home.  Oh, I did see a nonchalant Red Fox, lying on a rock not 15’ from the roadside, as I drove slowly drove through Jenny Lake Campground last Monday.  I managed four photos, two of which were rushed as he decided to move off after my two shots while he still lay on the boulder.

As I write this I am camped at dispersed site #2 on Shadow Mountain, seven miles from the main Visitors Center at the south end of the Park, and with the rain just beginning to fall.  It will turn to snow sometime later in the night, and the temperature will only get a couple of degrees above freezing tomorrow.  I am going to attempt to post this blog entry from my phone, as I have intermittent 4G, but a weak signal.  Not many photos, I’m afraid.

It is now two days later, Monday, and in the intervening time there have been intermittent snow showers (continuing throughout today), and I saw a young bull moose not a mile down the road as I was leaving camp.  I was going to try posting this last night, but I was not able to access the Internet.


Of course the Tetons were named by the Mountain Men in the very early 1800s (think Leonardo di Capprio as Hugh Glass in “the Revenant,”), many of whom were French Canadians, and means ‘tits,’ and the biggest of them all, the Grand Teton … ‘Big Tit’ ... all I’ve got to say about that is pretty gnarly tits … those Mountain geezers were out there … perhaps a bit too long … one might think.

Well ... posting this from my phone is really trying, especially getting the photos into the mix ... luckily a flock of Juncos just flew in and are pecking around in the bare patches between clumps of melting snow, providing a calm in this storm of blog posting from this small device!!
Posted by Not Quite a Painting a Day at 21:00