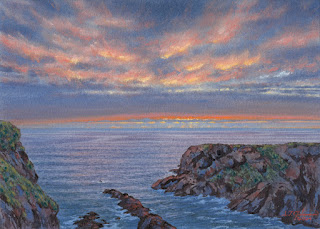 
[Note: “Not”, in the Media description above, means “cold pressed” ... that term is used in Britain, cold pressed over here.]

A mixed media work like this begins with a sharpened stick, a twig really, dipped in  sepia Acrylic Ink, and the cliffs and rocks were broadly blocked in. The acrylic ink was used as it is waterproof, once dry. Many times I use Walnut Ink, even though it is not waterproof, but not when the paper will be saturated with Watercolour washes. In that case I might outline the forms in pencil first, then lay in my Watercolour washes, and then work in the Walnut Ink over that, and then continue working with Watercolour and Gouache, with a not quite dry brush effect ... you might say a dry wash; the ink might bleed a little, but not a lot ... then true dry brushing to finish off. I have digressed from the description of this work where I used Acrylic Ink, straight off ... I probably began with a light pencil line to place the horizon. Once the ink was dry, Watercolour and Gouache were used for the painting. Much of the inkwork would have been supressed by the opacity of the Gouache, so some of it would be re-established with the stick and Ink again. Finally some judicious touches of Pastel were used in the sky.

Arriving back in Treyarnon Bay, Cornwall to sell my little flat, after my first four months in Oregon, this was my first sunset. We are standing at the head of the cove looking down the length of it. The view in the the last post, “Blustery Day at Fox Cove,” was from down the left side looking across the mouth of the cove to the promontory on the right. The spine of rock in mid-cove, in this little study, was out of view to the right in that larger Watercolour. You will see that it is #2, in the title above. Number one is in Helmsley, Yorkshire, with JackFineArt.com, and can be purchased there, framed. The above work is unframed. In the other one, the sun is just at the bottom of the bright orange strip of cloud above the horizon. In the image above, the sun has just slipped below the bright yellow edge of cloud below the orange strip, so that it is behind the light blue clouds just above the horizon. These light blue clouds have a number of openings allowing light to glow through, and the sun may briefly shine through one of these before it disappears below the horizon ... or it might not ... that is part of the enjoyment of a cloudy sunset ... will it show through, or won't it ... will there be good colour, or will it fade away as a grey bland evening. In this case the colours never got any better than this, and once the sun actually dipped below the horizon, that was pretty much it, but it was good for this little while.

Bitterbrush leaves are on the turn. About the end of the first week of August, the first yellow leaves appeared. At first I thought they were late flowers until I took a closer look, and saw they were leaves; now about 10% of the leaves are yellow. There is another bush, related to tha gooseberry, that is even further into the yellow. Autumn is here already, even though the days are still getting into the high 80s, and low 90s.

The Seasons come and the Seasons go. The weathermen and the newscasters will tell you, for example, that the 21st of June, the Summer Solstice, is the first day of Summer. Shakespeare would disagree, and so would I ... it is Mid-Summer's Day, not the first day of Summer ... Mid-Summer ... the longest day of the year, and thus the shortest night ... A Mid-Summer Night's Dream. Summer begins six or seven weeks earlier. In Padstow Cornwall, Summer begins on the 1st of May, and is celebrated as such. I celebrated 23 Maydays in Padstow, and I sang the Mayday songs with them, and I fully agree with the them ... “them Padstonians is right, Bey!”. Thus Autumn begins in early August, and the Autumn Equinox in September, the 23rd I believe, when the night and the day are of equal length, is not the beginning of Autumn ... It is the middle of Autumn, as the leaves are telling me now. Of course the Seasons are not to be pinned down to a particular date; they vary with the climate and latitude, and even altitude, but for England, and Oregon, and even in the Upper Midwest, where I grew up, it generally works that way. Midwinter ... 21st of December ... the shortest day of the year ... snow lay heavy on the ground, when I was a boy living outside of Lake Nebagamon in northern Wisconsin ... not the first day of Winter ... Mid-Winter.

Since last Saturday, the 22nd, there has been a smokey haze over the landscape from the wildfires around San Francisco 500 miles to the south. Friday night, the stars and the Milky Way had been glowing at their best, but when I awoke and looked across the flat, to the hills, a mile or two away, there was what looked to be a mist and a positive fogbank. The fogbank soon burned off with the sun, but the mist remained and as the day progressedprogressed got thicker. I couldn't smell smoke and I saw nothing to indicate it was close by. I'm not convinced that the fogbank wasn't just that, a fogbank ... it acted like one and there has not been one since; only this continuous smoke haze. Anyway, that first night I could see no orange glow in the sky in any direction, so I reckoned there was no fire close by. I was still not certain that it was smoke. I have no cell connection in camp, and my car radio died some time ago. The next day I went to town for supplies, I was able to get internet radio a few miles from camp, so I heard about the smoke from the wildfires around San Francisco. The fifth day of smoke, Wednesday, it was almost clear in the early morning,  but buy evening was the worst day yet; reminiscent of the Montana wlidfire smoke I experienced, when camped on Brooks Lake, north of Dubois, Wyoming, back in  ‘17. Last year was good in that I had no smokey days all Summer long, except for the second time, in ten days, that I passed through Crater Lake National Park; that smoke was from a wildfire way to the west near I-5, I believe. I wonder how long this smoke will last?
Posted by Not Quite a Painting a Day at 22:30