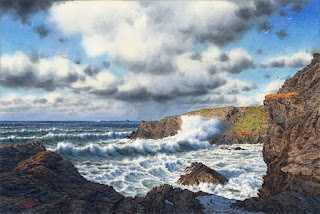 
My usual walk out to the sea-cliffs, from my Treyarnon Bay abode, was to proceed south along the country lane for a couple hundred yards, then turn right onto an even smaller lane. This took me about 600 yards straight out to the cliff tops, the last hundred yards or so through the fields. On the way I would pay attention to see if the local Mr. Badger had recently crossed the road on his accustomed route, or if Master Fox had  deigned to make a recent appearance. Once through the fields and onto the cliff-top, and the coastal footpath, you would be at the head of Warren Cove. Now between Treyarnon Bay to the north and Porthcothan Bay to the south there were six smaller coves: from Treyarnon south being Wine, Pepper, Warren, Fox, Minnows, and Rowan Coves.

So, now being at the head of Warren Cove, if you turned right  (north), and proceeded onto the promontory between Warren and Pepper Coves, you soon would come to the earthen ramparts and ditches of an Iron Age fortification. From here if you looked across Pepper Cove to the next promontory, and then beyond Wine Cove you could make out further ramparts in line with the ones you were standing on. It is my theory that these three now separate lines of fortification were once all connected as one line of ramparts, and that during the intervening 2000-2500 years has seen the sea eroding the coves deeper into the land, thus separating the single line of ramparts into three. Originally this rampart probably would have had a timber palisade on top and a fortified gate. Inside the ramparts, further down the promontory between Warren and Pepper Coves, are the remains of a fogou, or souterrain, as it is known in Scotland. This is a short tunnel excavated out of the rock. Although there are many theories, no one is really sure what they were for. For me this one was dug so that millennia later I would have a place to shelter from passing showers ... well that's my story, and I'm sticking to it.

Back at the cliff-top at the head of Warren Cove, and turning left instead, within yards the footpath crosses over a Bronze Age round barrow, some 3000-3500 years old. Who was buried here, I wonder? We'll never know. Pausing for a moment and looking south towards Porthcothan, a mile or so distant, other round barrows can be seen. Proceeding around the wide promontory, between Warren and Fox Coves, will bring you to the north side of the mouth of Fox Cove. This is the headland, in the Watercolour above, with the wave smashing against it. Just to the right of where the wave is crashing is a steep path down into the cove, making it accessible at low tide; and at the lowest tides the water's edge is almost out to the tip of the promontory ... you wouldn't think that you could walk down there, looking at these rough seas in the painting; but you can. The difference between the lowest and highest Spring Tides of the year, on this coast, is about 27 feet. Here on the Oregon coast it is just a few feet ... not impressive at all, and I have no idea why the tides on the two coasts should be so different.

Fox was my favorite of these little coves; Fulmars nested there in Spring. In the painting you can make out the Quies (the distant islands) beyond the tip of the promontory. To their right and out of sight, you would eventually spot Bull Rock, just off Trevose Head, where the lighthouse is (see the post before last and the one before that). In the Watercolour, we are on the south side of Fox Cove on another wide promontory between that cove and Minnows Cove, another accessible cove with a bit of scrambling.

A Hummingbird flew into my truck a couple of days ago. “Yes, yes, we've heard this before,” I hear you say, but this time it was in for about five minutes! At first he was just checking out any red items in the truck, paying especial attention to the rolled up top of a bag of tortilla chips, which must have resembled a large red flower ... he kept going back to it. Eventually, while checking out items on my dashboard, he decided that there was nothing for him there, but was stopped from flying off by the windshield ... just like a big old fly, he tried it several times, before settling on a brush case to think over the situation. He sat there cocking his head, no doubt thinking “I can see where I want to go up there, but something invisible keeps interdicting my flightpath ... maybe it's a force field.” Quietly I told him it wasn't a force field, but only glass, and that there were open doors to fly through, but would he listen? Noooo. A couple more attempts at the windshield were made, interspersed with sitting on the brushcase and philosophising about Life, the Universe and Everything. He looked very bemused ... yes, a hummingbird can look bemused. Stop philosophising, I told him, and just fly out one of the doors. Show me you're smarter than a fly. But he was determined to test the laws of physics. Finally, being afraid he was wasting too much energy in his abortive attempts to pass through the force field, I went outside and waved a hand on the outside of the windscreen (that term is for my British readers), and a moment later out through the door he flew. That's all there is to it, I shouted after him. That proved he was still smarter than a fly, since when I do that to them, the flies just buzz to another part of the windshield/windscreen, and/or hide in the crevices between the objects on the dashboard ... fly out the open doors? “Doors ... whut doors?”, the flies drone in inquiry. And that's my Nature tale for today.

By the way, the Hummingbird was back the next day checking out my red tail lights. Also he wasn't bashing into the glass, as his wingtips were brushing against it first and he kind would lose power, before trying again.