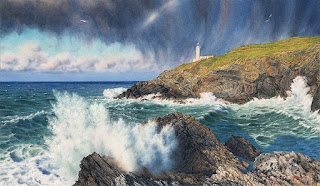 
Bedruthan Steps was about a two mile walk along the sea-cliffs, to the south from my flat at Treyarnon Bay, descending into and out of Porthcothan along the way. Low Tide at Porthcothan allowed you to cross the mouth of the very deep cove saving several hundred yards on your coastal walk. There was a sea-stack with an arch there, as well, that you could access at low tide. You always think that the landscapes that you are familiar with are timeless, at least in your lifetime, because geological time is sooooo long in comparison. But this is not necessarily so. If you take note of your surroundings, by and by something will happen that you thought would not. A case in point is that the arch in the sea stack at Porthcothan fell through during a January storm in the mid 90s. So now instead of an arch with the sea spuming through at high tide, there is what now looks like two broken teeth. Living for sixteen years at Treyarnon Bay, and walking those local cliffs, as often as I did, there were other rock falls in the various coves that I detected over those years, although none as obvious as the loss of that arch. With the arch gone, I wondered whether I had gathered enough reference material during the preceding years; how much is enough?

Bedruthan Steps was to the south, as I said, but Trevose Head was less than two miles to the north of my residence. From my place, if you walked down the lanes to the Sea, and keeping to the north shore of Treyarnon Bay, you would then round the low headland dividing that Bay from Constantine Bay. Then skirting around Constantine, continuing north, you would reach Booby's Bay, really for all practical purposes part of Constantine Bay, and then the neck of the Trevose Head peninsula. Strolling along the south side of that peninsula, up past The Round Hole (a sinkhole connected to the Sea through a cave), you then come to this view in the painting above.

On this particular March afternoon, the seas were quite nice and blustery, and you could see showers passing by to the north and south, until this one passed over and began to move on up the coast and inland. The bulk of it was to the right over the aforementioned Bays (it was almost not worth putting on my rain gear), and as it passed on the Sun came out and a rainbow began to appear. The swells were large, but not particularly so, but they were hitting the cliffs just right to cause great spumes of water and foam. Since my eye level is about 60 feet above the water here, the wave in the foreground is not far off that in height; so the wave hitting the cliffs on the extreme right, across Stinking Cove (yep, that's ‘er name, Bey), is just breaking the line of the horizon, so it is just higher than 60 feet. I knew this would be a painting from the moment the shower passed over.

A dark Tinkerbell flew about my camp just past sundown the other night. I thought it was a Hummingbird flitting about, but as it flew horizontally, its body was in a vertical position, and I had never seen that before. Also it seemed a bit late for a Hummingbird to be out, I thought. With its posture and flight idiosyncrasies, it did remind me of Tinkerbell without a light ... kind of a demon Tinkerbell. I still would have thought it to be a Hummingbird, until it crashed into my Thule luggage container on the top of my truck, and I was able to see it was a huge beetle, brownish, and about four inches long, now lying on its back on my SUV's roof, and unsuccessfully trying to right itself. Well, I drew my bush knife and flicked it over, and a short time later it cranked up its wings and flew off ... in that odd verticle position ... definitely a demon Tinkerbell, for sure. Too dark to take a photo, even if I had my camera ready.
Posted by Not Quite a Painting a Day at 16:05