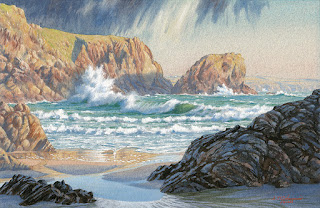 
Continuing on from last post's theme of using Turner's Blue Watercolour Paper, this view of Kynance Cove is more akin to Turner's use of the paper, while the last post of my Sepia drawing was more akin to Claude. In neither one am I attempting to emulate J.M.W. Turner or Claude Lorrain, but if I had not seen either of their works, I probably would never have thought of using this paper in quite this way. Actually that might not be true. As a young man (in preparation for a Summer long hitch-hiking journey, from Michigan's Upper Peninsula out to the Maritime Provinces of Canada and New England, drawing and painting), I was doing a Watercolour a day, and studying several Watercolour “how to” books, by such artists as, Ted Kautsky (sp?) & John Pike, but the one that I found most useful was a small 75 cent Studio Vista pocket book on Watercolour painting by the British Artist Rowland Hilder (I got to meet him centuries later at a Royal Society of Marine Artists Exhibition, before he passed away, and tell him so). In that book he talked about painting on coloured papers, which were difficult to find in the darkest corners of the Upper Peninsula; but a seed was planted.

It was on that hitch-hiking journey, while looking out to Sea, in the gloaming, and watching the rising of the Moon, from the cliffs on the eastern shore of Maine's Monhegan Island, I was inspired to go to England. The island's Cathedral Wood was out of view, from my vantage point, and as I looked around, musing, I wondered whether Scotland might look like this. The Moon rose a little more. Maybe you should go and see, I thought; and yes, you could go to that little school of art, Heatherleys, that you saw ads for in that British art magazine, “The Artist”, that was occasionally to be found in art supply stores; yes, you could improve your drawing and painting skills. Art was merely a hobby at that time. The Moon rose higher, and as I fixed the idea into my head, I wandered back to Cathedral Wood, and spent the night rolled up into my blanket roll ... no sleeping bag on that trip, folks! And in the fullness of time, two years later, I walked through the doors of the Heatherley School of Fine Art and the rest is history. Instead of the two years in England that I planned, I ended up in residence for 34 years ... 23 of them in Cornwall.

With the seed of coloured papers planted by Rowland Hilder's little book, I finally found suitable papers once I arrived in England. Eventually I discovered how Turner and then Claude had made use of them. In my early days at Heatherley's I got a pass card to the Student's Room at the British Museum, which was really the Prints and Drawings library. You would go in and look up what you wanted to see, then a curator would trundle off into the abyss, and eventually return with what you had requested to see; in my case it was usually Turner sketchbooks ... I hadn't discovered Claude yet. The Turner Bequest was still at the British Museum (the Clore Gallery at the Tate Britain hadn't yet been built to house his bequest ... in fact, it was just the Tate, since the Tate Modern hadn't been built yet either), and I eventually worked my way through much of it, discovering Turner's use of coloured, and especially blue-grey, papers. There is one Gouache on blue paper of Luxembourg in the Bequest that I would die to own, and another in a private collection of a Sunrise over Rouen ... perhaps when I win the lottery, I can persuade the one in private hands to be relinquished ... make them an offer they can't refuse.

Ah, but anyway ... Kynance Cove ... it lies down on the west coast of the Lizard Peninsula on Cornwall's south coast, not far from the southernmost point in Britain. In fact the Lizard is just an inch or two off the right of this painting. Kynance is not an easy place to access. Oh it's easy enough to get down the footpaths from the carpark, but once down there the tide has to be watched so you don't get cut off. You never seem to have enough time down there. It's also a place to be avoided in Summer, as the traffic on those narrow lanes can be worse than Hyde Park Corner during rush hour. I only went there a few times in all my years in Cornwall, and always in the off-season. It’s quite a trek down there from the north coast ... at least in Cornish driving terms. Bedruthan Steps might get crowded in Summer, but even then if you watched your tide-tables closely, you could go down early in the morning as the tide was going out, come back up about when the first Summer people were arriving, and then in the evening, after the tide had come back in during the afternoon and was beginning to go back out, you could go again ... and most of the visitors were now gone to their holiday abodes for supper. But then, I lived near Bedruthan Steps, at Treyarnon Bay; perhaps Kynance Cove could have been figured out if I had lived as close.

I thought I was finished talking about chipmunks & ground squirrels, but I have begun to tell some of them apart, as individuals, and they have been highly entertaining. Although I haven’t bought strawberries every time I've gone to town for supplies, they have remained cheap and I've only missed them a couple of times. The last two purchases have seen a couple of the berries beginning to spoil, and so I cut thebad parts off and the squirrels and chipmunks got a bonus that day. Even though I'm pretty sure that they haven't actually seen me putting out the remnants, they do connect the strawberries with the truck, as they can smell them before I've eaten them, when they come past checking for the remnants on the ground. The remnants I have for lunch get distributed once I've finished eating, but the ones for supper get distributed as I settle in for the next morning's breakfast. I usually have one kept  back in reserve so that one of little guys doesn't get everything ... it doesn't always pan out that way. Sometimes the chipmunks get there first. They tend to grab one and run off with it, especially if they detect I'm watching them. Thus usually more than one gets strawberry remnants ... either all chipmunks or a mixture including the juvenile ground squirrels. If “the Big Fella” gets in on the act he usually stays put and scoffs down the remainder; “the Big Fella” is the main adult Golden Mantled Ground Squirrel. If he gers there first then that's usually all she wrote. He also doesn't get all paranoid with me watching. When he misses them altogether (even the one in reserve), he seems to know it and will come past periodically grumbling away; at least that's what his chittering sounds like.

During the hot weather we've been having, the majority of days this past month, “the Big Fella” has sometimes come and plunked himself down on the ground by my open door and stretched himself out, just like an old dog ... not longer than a minute, or so, but that's probably a considerable length of time, in ground squirrel minutes. Their vision must not be in colour, as they snuffle around finding the strawberries by smell, rather than sight, since they sometimes miss one just an inch away, when if they were seeing it in colour, they could not miss it. They seem to be attuned to faces, at least the eyes, as they know when I'm looking at them, even if I'm perfectly still. Like most living creatures, including mankind, they notice movement straightaway. Sometimes when I'm watching them eating something, and I'm perfectly still, I might do the old up and down eyebrow movement, and they will immediately stop chewing. They might continue eating, after a suitable time with no further motion on my part, but sometimes they might have run off after the eyebrow twitch.

Natural foods I've observed them eating, are the flower heads of Lupines, as well as the leaves. The grasses are now getting attention, now that the seed heads seem to have ripened to their liking. I”ve seen the chipmunks up on the Ponderosa branches nibbling at the base of the needles. “The Big Fella” dug up some sort of insect pupa (so it looked like), right by the truck and nibbled away at it; there was a viscous yellow fluid that was inside. He ran off with it, no doubt thinking my interest in watching him was a desire to eat it myself ... not until I know what it is, Big Fella. Very occasionally there will be a bad bit of broccoli or baby carrot that I have to throw out, and I have discovered they like those as well (and avocado remnants) ... haven't seen them running down a deer and devouring it just yet, but considering the variety of things they do consume ... well, time will tell.