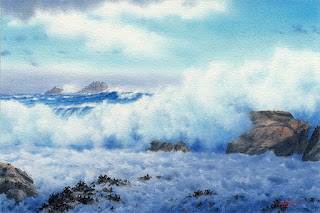 
[Note: “Not”, in the Media description above, means “cold pressed” ... that term is used in Britain, cold pressed over here.]

Still in Poldark Country, as we have been since the end of July, and with this work we are now down near Lands End. Here we are at Cape Cornwall looking out to The Brisons, islands just off shore. Out of view, to our left a couple of miles, is Sennon Cove, and there the shore turns 90° to the right, and a mile or two along the coastal footpath will bring us to Lands End, the westernmost tip of Cornwall, and England for that matter. From there, once past the Scilly Isles, twenty something miles offshore, it's next stop America.

The Sea around Cornwall is unlike any other I have experienced in the rest of Britain. This in fact may, or may not, be true; perhaps if I had experienced other coasts year around, they might have proved to be as interesting and variable. But I do think those Seas around Cornwall are special. In Summer they can be downright tropical in colour, with greens and turquoises to rival any found in lower latitudes; and then the grey and greens of Winter, when a lowering sun breaks through the cloud and illuminates the thin turn of a cresting wave from behind, turning it into a stained glass of grey-green-gold, just before it breaks; and the next day the grey green has metamorphosed into a blue so deep, it brings tears to your eyes. In the Watercolour above it is late September, and somewhere far out to sea, some hundreds of miles away, a storm has sent big swells rolling onto Cornish shores. There is an offshore breeze, but not enough to change the blue to green or grey; and being protected by the cliffs behind, the breeze only begins to really affect the breaking waves out by the Brisons, and beyond them, blowing the spume seawards. I've only witnessed this effect a few times, where the colours are predominately ... Blue Seas & White Surf.

The birdlife around camp has slackened off compared to what it was a few weeks ago ... another sign of Autumn? The Western Tanagers seem to have moved on about three weeks ago. I did see a Bald Eagle yesterday, and that was a nice surprise. The Hummingbird is still about, Northern Flickers, the Nuthatch, and Woodpecker, are still residents. Oh, there are still birds about, but not a many, and a lot of them are LBJs (little brown jobs), that I haven't been able, nor had the time, to identify.

The eighth day of San Francisco smoke, was last Saturday, the 29th, but by late morning the wind had shifted around to the northwest, and pretty much cleared it away. There were occasional drifts coming through until the next evening when it got really smokey  about 5 pm. The wind was then from the northeast so I reckon this was smoke from thirty to forty miles away, up in the Ochoco National Forest. The moon was a deep red orange, low in the east when I spotted it in the late twilight. The wind shifted again overnight and since then has been generally good. This morning there is a slight smokey haze across the flat to the east ... the respites have been welcomed (the day did turn out to be pretty smokeless, and an enormous full Moon rose as twilight deepened).

And just when I said the birds have thinned out (which they actually have), the morning of 2nd September has been quite entertaining with birdlife. The Chickadees were out in force, loads of LBJs, mostly warblers of various types, were flitting about the truck, looking in the wing mirrors, and taking special interest in my water filtering bags hung in a tree filtering my melted ice water, and generally doing birdy things.

There is a Douglas Squirrel, that I've seen hardly at all, that today was up in the small tree eight feet to the left of my vehicle. It cut off a cluster of pine needles, letting it fall to the ground, and then climbed down and ignored it. Later one of the Golden Mantled Ground Squirrels came along and nibbled on it ... wonder what that was all about?