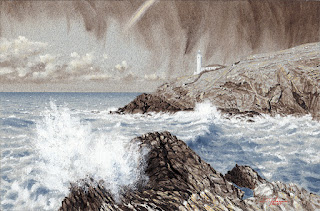 Claude Lorrain’s (1599-1682) drawing book, the Liber Veritatis (the Book of Truth), lies in the British Museum, and we are fortunate to live in an age were we have access to so much great Art on line. Perhaps that is one of the few fortunate things, considering the polution, global warming, pandemics etc. that we also have to put up with (don’t get me started!). I have a book, published in the 70s I believe, with all the drawings of the Liber Veritatis in black and white; excellent for information, but being not in colour, missing most of the subtleties of the originals. Ten years ago I downloaded all 200 drawings of the Liber ... back then it took awhile with the slow connection we had at the time. Claude Lorrain began that drawing book, as copies of his finished oil paintings, to provide a record of his works ... if it wasn't in the Liber Veritatis then it wasn't a painting by him, but a forgery ... thus, the Book of Truth. Like many long term endeavors, things changed over time, so that towards the end some of those drawings were drawings in their own right. The book consists of a folio of eight pages of a cream paper, then a folio of eight pages of a blue-grey paper, then cream, blue and so on. The blue paper is similar to that used by J.M.W. Turner almost two hundred years later.

Although Albrecht Altdörfer was probably the first painter to paint pure landscapes, some two hundred years earlier, Claude is really to be considered the first consistent painter of Landscapes. Yes, I know that Annibale Caracci also painted them a bit earlier, and that Poussin (contemporary with Claude), could also be considered, but Caracci's were part of his larger oeuvre, and with Poussin the Landscape really forms a theatrical backdrop to his all-important figure arrangements. With Claude you can consider his figures as mere staffage, and really an excuse to paint his landscapes ... those golden-glowing atmospheric visions of a mythical Arcadia. And of course the times demanded the “staffage” to tell a story ... of history; of mythology; of religious import; of whatever. But Claude was a Painter of Landscapes, pure and simple, and every Landscape artist that followed owes him a debt, whether they've ever heard of him, or seen his work, or not. The mighty J.M.W. Turner (1775-1851), the only Truly Great British Artist (as far as I'm concerned), knew this, and it's fascinating to see two Turner's juxtaposed with two Claudes in the National Gallery in London.

But back to the drawing ... with the blue-grey paper you have a middle tone already there, so that when drawing, the sepia washes and Walnut inks will form your darker tones, and the heightening with White (chalk, gouache or Chinese White), will form the lights; also the sepias & warm browns harmonize so well with the blue-grey of the paper. In a lesser way, a cream paper will serve the same purpose, as far as the tonality is concerned, but you won't have the lovely warm/cool effects produced by the use of the blue paper. I've gone a bit further by also adding Cobalt Blue and Winsor & Newton Naples Yellow to the palette. The Cobalt Blue helps delineate the Sea, and the Naples Yellow warms the chill of the white, where necessary. Of course I'm not producing a “Liber Veritatis” here, with this Watercolour Drawing of Trevose Head Light (even though it was created after the large Watercolour and therefore a record of that painting), but I do have several sketchbooks, that I had bound with the blue-grey, cream or buff papers of my choice, for use when drawing out in the Wilds. Incidentally, Turner used the blue paper to create exquisite Watercolours by mixing Chinese White, with the Watercolour, essentially making them Gouaches (opaque Watercolours); his “Rivers of Europe” series are absolutely stunning.

To modern eyes, many will have a problem with Claude, since Landscape Painting has come a long way in four hundred years; but when looking at any paintings from the past, you must approach them within the context of the times in which they were painted ... your pleasure will be all the greater for a little preparational history study before hand. Do pluck out your “modern” eyes, and insert your early “17th century” ones when lookng at Claude.

[Note: Yes, there are the contemporary Dutch Landscapists to be considered, but few people outside of the Netherlands saw those paintings. And many of those Artists, had been to Rome, and were thus aware of Claude, who, though from France, spent most of his working life in Rome. Being based in Rome, in those days, pretty much guaranteed that knowledge of your work would be spread throughout Europe.

It seems that the birds have stocked up on their share of calcium, as the eggshells are only being dabbled at. As I suspected, they must be interested in them mainly during the nesting season. So I will pick up most of them, and dispose of them in my garbage bag when I leave camp, leaving only a few tinier bits in case someone needs a calcium top up.

There are about 40 or 50 juvenile scrub jays in the area, and sometimes they are all in the vey large fire ring, about 50 feet from my vehicle. There must be some trace minerals, or something, that the birds and chipmunks need, as every camp I am in they are attracted to the fire ring. I first noticed this at my camp at Lincoln Portal, 16 miles south of Aspen, Colorado. Kept an eye on it ever since.

A small flock of female and juvenile Mountain Bluebirds were observed feeding a couple weeks back ... not as show-ey as the sky blue of the males.

Another Hummingbird flitted through my truck a couple of days ago.

There is not much Rabbitbrush near my camp, mostly Bitterbrush and Sagebrush, but what there is now in its prime, the flowers having come out in the last couple of weeks. The plant itself is a lovely spring green, adding another variant green to the High Desert, now that the grasses are all ochre. On the way to town for supplies there is much more Rabbitbrush on show.

Yesterday, and I do mean yesterday as I am posting this today, a thunderstorm trundled by to the east. A bit of rain fell here, enough to cool down the evil heat that had been building since early morning. I still find it interesting to hear these storms coming, an hour or two before they arrive. It's almost a subsonic rumbling that you're not sure you're actually hearing, at first. It could be a distant plane, you think, or maybe a pickup truck pulling a caravan, bouncing down the dirt road. But no truck appears, and the susonic rumbling continues long after any plane would have long gone. The sky might give it away, if I walked out to the road where I have a more unobstructed view, and eventually it does, even here in amongst the trees. I removed my two 5 gallon spare petrol containers from my trailer hitch platform, and took them off 50 yards from my SUV ... no sense sitting having a bomb attached to your Faraday cage if lightning strikes. But all the thunder was to the east, and no actual lightning was to be seen. A bit of rain fell. The wind came up for a bit, and the sun only came back out about an hour before sundown, with the dark clouds persisting eastwards, long after the thunder had ceased ... you could still see the distant thunderheads far far off on the distant eastern horizon, glowing pink in the sunset, hours after the rain. It's the slow build up that I find interesting ... I've not really noticed it before this year, and it's happened several time since April.
Posted by Not Quite a Painting a Day at 15:35