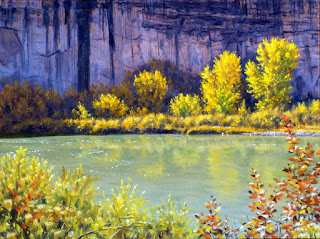 
The Green River arises in the northern end of the Wind River Range in western Wyoming, first briefly flowing northwest, then loops out of the mountains to flow south along their western edge. It continues through western Wyoming, cutting the Flaming Gorge south of the town of Green River (where those of you familiar with the works of Thomas Moran will recognize the buttes and bluffs in some of his paintings). It enters Utah at the south end of the Flaming Gorge, turning east as it is blocked by the Uinta Mountains, flows into Browns Park, in extreme northwestern Colorado (definitely in Butch Cassidy country here), until it cuts through the eastern extension of the Uintas, at the Gates of Lodore. We are now in the northern section of Dinosaur National Monument. Rafting trips begin here. It now flows through deep canyons in the Monument, past the campground at Echo Park, near its junction with the Yampa River (an interesting descent of 3000” by car to get to), flows westerly from here, back into Utah and the western end of the Monument (Dinosaur National Monument, straddles the Utah/Colorado  border).

It is here where I came up on this quiet scene, not far from its egress at Split Mountain, and less than a mile or so below the Green River Campground. I have thought about painting this ever since my few brief moments here. I passed this spot several times in my explorations of this end of the Monument, and this time the lighting was just perfect. The contrasts of the purples and blues of the shadowed canyon wall (with its dark streaks of desert varnish), with the yellows, oranges and greens of the foliage, and the milky jade greens of the River itself, has stayed in my mind since those days I spent in the area in Autumn of 2017.  I stayed one night in the Green River Campground,  and it is quite pleasant as far as campgrounds go, with the River quietly flowing past. I spent the next 8 nights dispersed camping just outside the Monument on BLM land. The dinosaur bones are what bring most people to this monument, but if you are interested in geology and hiking intersting landscapes, Dinosaur National Monument is an interesting area to explore.

From here the Green winds south through eastern Utah, until its meeting with the Colorado River in Canyonlands National Park. I did not see the source of the River, but I could see the Canyon of the source south from where I camped at Mosquito Lake up on Union Pass, after I witnessed the  2017 eclipse of the Sun. I travelled the length of the Green through western Wyoming; saw it in Browns Park; saw it enter the Gates of Lodore; enjoyed the cooling shade of the cottonwoods for awhile at Echo Park; witnessed its emergence at Split Mountain; and enjoyed this little scene near the Green River Campground. I am not familiar with the River between here and Canyonlands NP, but I did see it from high places in Canyonlands, and just like not seeing the actual souces, I did not see its endgame, but I did see the canyon junctions where it joins its waters to the Colorado, from a distance. There are rivers that stay in the mind, and this is one ... I would see it again, should I ever go that way.