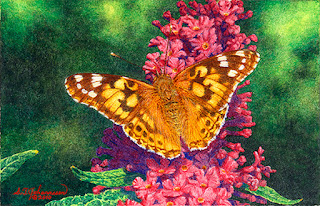 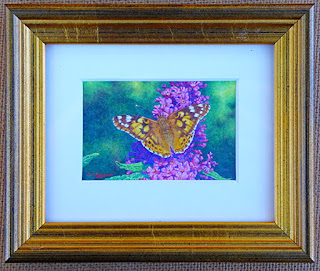 Another Miniature Watercolour, where I have not observed the 1/6th rule; I was more interested in studying the butterfly. This is a European species of butterfly, as most of my photo references were taken in England, and I even have a few specimens that I found deceased over the years while living there. In England, the Buddleia plant also called “butterfly plant” (or bush, or tree),  for obvious reasons.  See bottom of page for more on Miniatures.

The campsite I am now at is another 25 miles  further out into the Wilds, and is really a most interesting one. There seem to be much more in the way of birdlife, and the Golden Mantled Ground Squirrel & Chipmunk population is very healthy here. I will give you a taste of it all in the form of short observations.

As stated the bird life here is quite varied. Some of those observed are: Boreal Chickadee, Yellow Rumped Warbler, Purple Finch, Nuthatch, American Robin, Western Tanager, White Headed Woodpecker, Northern Flicker (the one with the russet underwing), Mountain Bluebird, and several others that I have not yet taken the time to identify.  The male Western Tanager is a particularly striking bird, with its yellow body, black wings and red-orange face. I was finishing supper while sitting in the driver's seat, with the door halfway open, when with a flurry of wings, a female Western Tanager, perched on the inside doorpull, and the male settled on the handle of the frying pan which was pointed away from me (I eat out of the frying pan), and they both sat there for over a full minute, before flying off ... I mean the frying pan was on my lap, so that means so was the male Tanager.  He was paying most attention to the female, with only a bit of attention to me. Too close for a photo, aside from the fact my camera was not readily to hand. On the 4th of July I was sitting on my folding campchair, reading before preparing supper, when the male Tanager swooped in and sat on my knee  for about 12 seconds! I've had chickadees eating out of my hand when we had a birdfeeding station in the yard, and I've had a Grey Jay, sit on the toes of my boot, when I had my feet up on a stone wall, while lounging in my camp chair at Mount Rainier, but this Tanager was a first. They seem to be quite curious birds, especially the male.

When I have eggs for a meal, I leave the eggshells out in case something wants to eat them, but most camps, I have ended up taking them to town to throw away with the rest of my accumulated rubbish. In this place, however, all the birds have taken an interest and pecked away at them, taking small pieces and devouring them; even the small Chickadees. The ground squirrels & Chipmunks also take an interest, but seem to nibble the inside membrane, and not the hard shell itself. It took about five days for the birds to polish off four shells. I think they are replacing their calcium, after the nesting season ... I have seen a few young birds about. I expect this probably would be happening at my other camps at this time of the year, as well ... I wonder.

One of the problems in showing them online is that to see them on screen, is to see them already larger than they actually are in reality. I haven't quite decided the best resolution. On my computer and my phone, they look good, size-wise (although still oversize), but on my tablet they fill the screen and are way oversize. The framed images give you an idea, but the colours are not the best since they were shot through the glass. The colours are best on the unframed images. Just keep in mind the actual dimensions when looking at the images on screen.