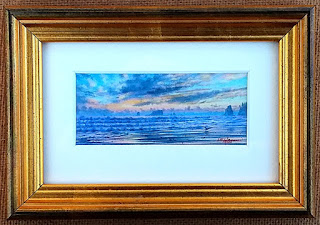 
Another Miniature Watercolour. I think it was 2009 when I first circumnavigated the Olympic Peninsula. After a photo-recon shoot at Cape Flattery, I proceeded down US Hwy 101, from the north, and then turned right off 101 for La Push. At another junction I turned right for a National Forest campground north of the river that flows into the Pacific at La Push. At this last junction I noticed a sign that said, “Peace line ... Vampires do not cross!”. This was my first inkling that I was in “Twilight” country. I had not seen any of the films yet, but was slightly aware of them (I don't know how many had come out by then). When I finally did see the films, one of the scenes purporting to be at LaPush was actually filmed at Indian Beach in Ecola State Park, near Cannon Beach, Oregon. Incidentally, it was also at Indian Beach that part of the final scene of “Point Break” (Patrick Swayze & Keanu Reeves), was filmed, standing in for Australia.

I digress. Other than Rialto Beach, to the north, the other beaches at La Push are all imaginatively named: First, Second and Third Beaches. This is Second Beach, in the above Miniature, where I spent most of a day. I did get to Third Beach, later that day, just before sundown. They are are both approached via walks through old growth forests, and are worth a visit. I can see why the high schoolers in “Twilight” went down there. Upon leaving La Push I soon came to the town of Forks, on Hwy 101, and the epicenter of “Twilight.” While sitting in a small traffic jam, waiting for the light to change, I noticed a few more references to the film, including a local travel bureau offering “Twilight Tours.”  So, there you have it, folks ... two reasons to go to La Push: either if you're a “Twilight” fan, or rugged scenery, with a beach, end old growth forests.

It is mid-July, as I write, and over the past couple of weeks, the grasses have turned to yellow ochre, from the greens they displayed throughout the month of June. During June you could look out across the “Sagebrush Sea” and the predominant colours were various greens. During April and May, the new growth of the grasses were growing green up through the old growth, until, in June, the new green growth took over. The seed heads ripened and on some grasses they were a decided purpley red in colour, so that slashes of soft red were interspersed within the greens, when looking across the landscape. Now the mature grasses have gone ochre, especially with this ‘in the nineties’ weather we've been having. Oh, there is still green down in the depths of the individual clumps, but the longer stalks are ochre, and the sage clumps lie within this ochre ‘sea’.

You might remember back in April, me wondering if the Antelope Bitterbrush, flowered every year. I was looking for those flowers too early, as they came out during the second half of May. During April the tiny leaves unfurl, and the Bitterbrush turns from a Winter grey to green, and later, when the tiny yellow flowers appear, the effect on the landscape is a lighter yellow-green. Close to, you can see the pale yellow of the myriad flowers on the bush, but from a distance the appearance is of a yellowish green. The flowers, are still out, past their prime, but still out; and the bees are still working them.

Two days ago the chipmunks made out big, on the strawberry remnant  front, by getting to them first. One of them even started on a cheese curl, that I had inadvertently dropped, but had been ignored for a whole day and night; the late coming ground squirrel, no doubt disgruntled on missing the strawberry remnants, chased off the smaller chipmunk and took over the cheese curl; odd how it had become of interest after having been ignored for so long. [Oh, there goes a chipmunk dashing up the big tree to my left ... now he’s sitting on a limb getting an aerial survey of the surrounding territory ... mission accomplished, going down now]. One of the chipmunks has gotten to the strawberries first, yesterday and today, as well, but only managed one bit yesterday, before the ground squirrel saw him off. Today, however, they got all of them, before the big fella showed up. It's only fair, as he's dominated most of the time.

The male  White Headed Woodpecker, that lives in one of the two dead trees four feet immediately to the right of my truck, woke me up this morning by pecking on my window. He's quite used to my presence by now, and  works the trees all around me. He's in the small tree eight feet to my left as I write. It's all go around here, I tell ya!

One of the problems in showing them online is that to see them on screen, is to see them already larger than they actually are in reality. I haven't quite decided the best resolution. On my compubter and my phone, they look good, size-wise (although still oversize), but on my tablet they fill the screen and are way oversize. The framed images give you an idea, but the colours are not the best since they were shot through the glass. The colours are best on the unframed images. Just keep in mind the actual dimensions when looking at the images on screen.