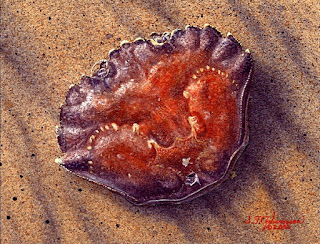 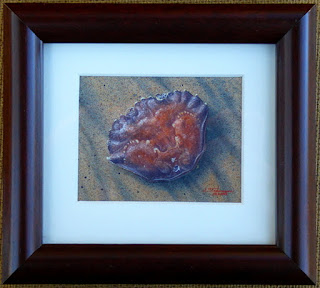 Another Miniature Watercolour. This was painted long before I thought about painting Miniatures. I had this crabshell, and decided to paint it as an exercise. Then the Miniature shows came along, and I already had one available. It just meant changing frames, as originally it was framed with a large thick matte (mount, to the British), and, oh probably, for fitting an 8” x 10” frame, or thereabouts.

As indicated in the last posting, the birds hereabouts really love their eggshells! The night before last I had eggs for supper and I placed the shells in the usual spot so I could watch them in the morning, over breakfast; by breakfast time they were mostly gone. They stop by the tree, periodically, and inspect the ground beneath to see if any more shells have magically appeared.

The male Western Tanager swooped into the half open passenger door, a couple of days ago, ending up flapping on my cluttered dashboard for a secondor two, before flying back out ... more surprised than hurt. I was having an after lunch doze at the time ... a bit of a shock for both of us, I might add. A Hummingbird is another one that flits into the car, on an inspection tour to check out any red packaging I might have. Usually it just enters a short space, but the other day it came further in and hovered in the center of the front seats above the cup holders, for about  7 seconds.

The other resident denizens are the Golden Mantled Ground Squirrels and Chipmunks; I believe the latter to be Eastern, or possibly Least Chipmunks. The Ground Squirrels are much larger than the Chipmunks, and with a  chunkier build; the nose is also shorter, whereas that of the Chipmunk is a bit longer and more pointed.

The  strawberries have recently been fairly cheap, in the shops, and so when I go to town for supplies, I have been getting a punnet, if I have room in my cooler. [Sorry, but the male Tanager just landed on the maps inserted in the recess on the inside of my driver's side door, and with a bit of the crepe skin of white onion, in his beak; I expect he thought it was an eggshell! We inspected one another for about 15 seconds. Incidentally, with the best will in the world, those crepey bits of onion skin can get away from you whilst preparing one's supper]. Sorry ... where was I? OK ... Strawberries. Yes, when I have 3 or 4 of them after a meal, there is a remnant of the fruit around the leaves. After all are eaten and I have brushed my teeth, and gotten settled-in for painting, or composing my emails or blog, I place the strawberry remnants where I can observe them. The birds ignore, or haven't found them, but the ground squirrels and chipmunks have. Usually it is one particular ground squirrel, and the chipmunk(s) are too late. Occasionally, a baby ground squirrel (the babies have appeared during the last 10 days), will get there first and, instead of eating it there, will run off with it, to a safer place. A couple of days ago everything worked out OK, for all concerned. The baby ground squirrel got there first and ran off with its prize. Then a chipmunk arrived next, began eating and then dashed off with its plunder, when the adult  ground squirrel arrived on the scene, and consumed the remaining two remnants. Everybody got some; and I was able to see the differences in size and build, between all three. The baby ground squirrel and the chipmunk were similar in size, but the former was much bulkier than the latter.

There are Lupines growing here, and the Golden Mantled Ground Squirrels find them delectable eating. At first I noticed the flower heads being eaten. A ground squirrel would reach up and pull down the flower head, bite it off, and hold and eat it like we do corn on the cob; sometimes they would not bite it off, but would eat it while still on the stalk. They also pull down a leaf cluster and nibble away on the leaves as well.

The ground squirrels will climb rocks, stumps and fallen trees, and perch on them, and survey their surroundings, but I have yet to see them climb a tree. Chipmunks, however, can and do. Hmmmm, interesting.

One of the problems in showing them online is that to see them on screen, is to see them already larger than they actually are in reality. I haven't quite decided the best resolution. On my computer and my phone, they look good, size-wise (although still oversize), but on my tablet they fill the screen and are way oversize. The framed images give you an idea, but the colours are not the best since they were shot through the glass. The colours are best on the unframed images. Just keep in mind the actual dimensions when looking at the images on screen.

The Hilliard Society
Posted by Not Quite a Painting a Day at 22:30