There is Wind at Port Orford too! 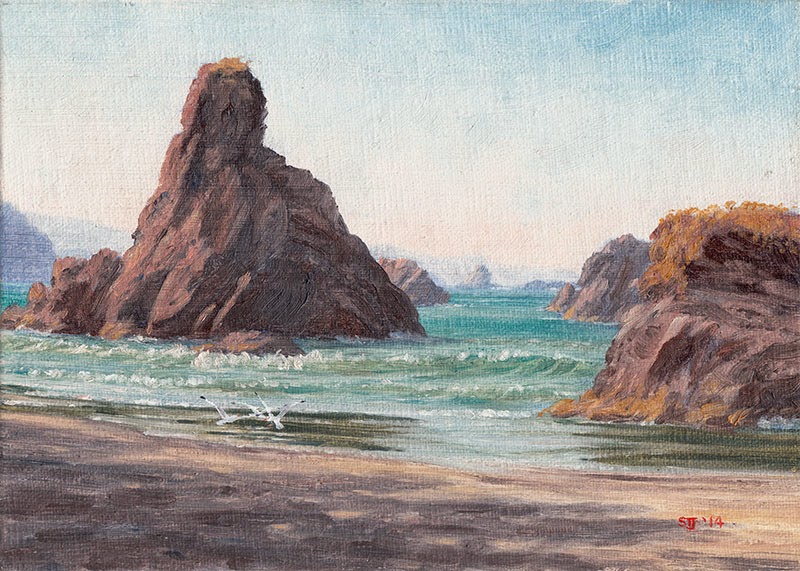 [Note that after posting this I inserted three seagulls squabbling over something or other … sometimes this happens; you look at a painting and decide it needs something else, as happened here. The image has thus been updated on September 5th 2014, and will be available for 3 days only from Daily Paint Works.]

The day after painting the view from Paradise Point to Cape Blanco I went up to Orford Heads expecting to find a view or two from which to paint; there were but the wind was strong and there were few places to set up without actually blocking the footpath.  I settled for a day of photo-recon, with some sketchbook drawing.  There were also Grey Whales working close inshore near the Orford Rocks; were they feeding or scraping their barnacles off, as was suggested to me by a local lady I spoke to on the beach?  There were at least two of them, perhaps more.

The day following I was on Orford Beach early and found a spot near the Orford Rocks, with a couple of the distant Redfish Rocks in view, with some of the Orford Rocks close to, and with early morning shadows from the forested cliffs behind me slanting across the foreground.  I thought I was protected from the wind, and so I was from the full force of it, but gusts managed to whip over me with regularity, and even kindly sprinkled a little dusting of fine sand on the painting, like black sugar sprinkles on Christmas cookies!  So again I’ll have to wait a couple of days before I can brush them off of the sky, when the painting is touch dry.  There were not as many as those on the one at Bandon Beach, and those successfully were removed.

When I began the painting the sea was blue-green and green, but not quite as strong as the painting of Cape Blanco of two days previous, and so I decided to proceed directly onto the white lead ground of the linen panel.  I blocked in the composition with Ultramarine, locking in the shadow patterns to retain the early morning feel of the view.  Starting with the sky I worked my way from the distance to the foreground, but leaving the closer Orford Rocks until I had covered the foreground beach with its shadows.  Then I went back into the Sea and worked on the waves and reflections in the wet sand.  I reworked the shadowed foreground to better its transition into the sea.

Surprisingly, even though the wind got up strong not long after I began working, the whitecaps didn’t appear until later, and then far out near the distant Redfish Rocks; I did not attempt to put any in since they were not there when I began.  I saw the Grey Whales spouting as I began to paint, but they must have been moving on after having been around for several days, for they were not seen again later.  All day I watched the fog-bank on the horizon streaming down from Cape Blanco, much as it has done all the while I’ve been here.  In fact the previous day while on the Orford Heads, the fog bank was coming over and obscuring the tip of Cape Blanco and the lighthouse, unlike the day I painted the view towards it from Paradise Point; then the fog bank was just out to sea beyond the Cape.  There is definitely a change in character of the Oregon Coast when you pass Cape Blanco.

The palette I used was Yellow Ochre, Venetian Red, Cerulean, Cobalt and Ultramarine Blues, a minimum of Viridian, and Cremnitz White, with a touch or two of Titanium White for the brightest foam of the waves.
Posted by Not Quite a Painting a Day at 22:30