Meanwhile back on the Coast 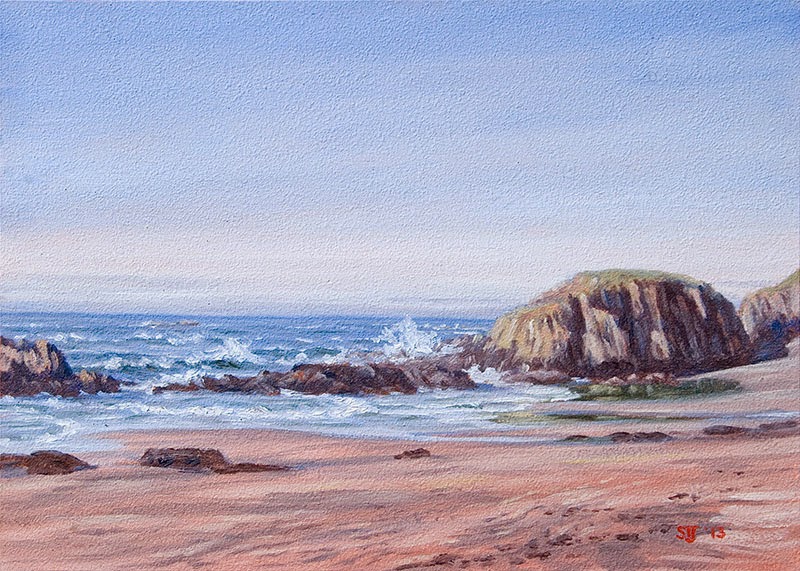 Meanwhile back on the coast, the weather was good and there were seascapes waiting to be painted, so after my couple of days up in the mountains, I worked my way down to Seal Rock a few miles south of Newport.  At Seal Rock, of all the rocks here at the State Park, there is no one rock that is called Seal Rock.  One might think that this large one might be it, but no … none are.  Being bemused by this I sometimes call them in the plural and some of the captions of my several paintings of this area are entitled thus, depending on how I’m feeling at the time; contrary or otherwise.  I managed two paintings on his day, the morning one being in one of my Galleries at present.  This was Thanksgiving Day, and then still managed a dinner of smoked salmon & vegetables on a bed of cous cous cooking it after dark; a bit different from my Thanksgiving Day ham sandwich of the year before up at Blizzard Gap on Hwy 140 at 6200’, on my way to Winnemucca, Nevada, and points east.  I found a forest clearing six miles up in the mountains from Seal Rock and made it my campsite for 8 nights, coming down to paint every day.  I managed seven Oil sketches during the days spent here including two during the 1st of December storm which swept in; most are in galleries, but there will be another on my next post.

The morning haze cleared and as the tide receded, and the shadows began to lengthen I worked up this 2nd sketch.  Over an imprimatura of Venetian Red, the pigments used were the triad of Yellow Ochre, Venetian Red and Cobalt Blue plus Titanium White (all W&N).  I’m quite pleasantly surprised to get the sea-greens as well as the green of the grass on the top of the big rock from just the mixture of Cobalt Blue & Yellow Ochre; I shouldn’t be since I got a range of mixed greens when mixing in Watercolour, but I’ve not done as much with Oil as I have with Watercolour over the years.
Posted by Not Quite a Painting a Day at 22:30