On the Forest Roads from Mount Rainier south to, and beyond, Mount Hood.

Take Note that some friends and family, who have signed up to receive email notifications, whenever this blog has a new posting, have not received these notifications for about a month, so I suggest that to receive further notifications that you sign up your email address, on my blog, to do so (www.StevenThorJohanneson@blogspot.com.  This is to those of you who have come manually to this site, wondering where I am, so please do sign up again.  I don’t have any idea why this would happen … perhaps hackers from you know where(!) … or Gremlins, I expect.

Sunday, 17th of June to Monday, 25th of June – To Seattle, WA, and then the Forest Roads back to and through the Washington & Oregon Cascades.

Two days later I was off to Seattle to collect paintings from a gallery that had shut down while I was away.  He next nine days I spent on the forest roads east and south of Mount Rainier National Park, wending my way south through the Gifford Pinchot National Forest, in the triangle formed by Mount Rainier to the north, Mount St. Helens to the southwest, and Mount Adams to the southeast, before crossing the Columbia River back into Oregon at the Dalles, and then into the Mount Hood National Forest, on reconnaissance for future campsites, and paintings.  I found some great sites.

The first two nights were spent east of Mount Rainier, following the Greenwater River up to, Government Meadows near the crest of the Washington Cascades; deep valleys; steep road; snow patches still up there.  After that I proceeded into Mount Rainier National Park, stopping off at Silver Springs Camp Ground to fill my water bottles, with Stevie Nicks, of MacWood Fleet, singing the song “Silver Springs” in my mind ;)  The Sunrise Visitors Center was still closed, due to snow, but I only wanted to get some photo from the White River Campground, and later at Silver Falls … I have been to Mount Rainier before, in 2010, and on this trip really wanted to get onto the forest roads. 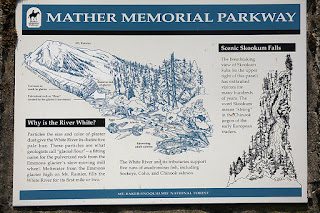 That night I camped well south of the National Park, and deep into the aforementioned triangle, with a view of Mount Adams, not far from Chambers Lake … oh, and with a few mosquitoes as well.  It is wild country up there, and the snows were still halfway across some of those forest roads, but none were blocked.  Takhlakh Lake (to be pronounced “Toc Loc”), was my favorite of the lakes I visited, because of the view of Mount Adams reflecting in its waters.  I also dropped in on Twin Falls, which I had visited back in early June 2011, this time approaching from the north, the direction I tried to go from Twin Falls, but was stopped by snow back then; now it was two weeks later in the season, and the snows were sufficiently reduced to allow travel on most if not all the forest roads.  This is wild country worth exploring a little further, maybe later in the year.


Once I crossed the Columbia River and back in Oregon, it was late in the day, as I climbed southwest out of Hood River, heading for Lost Lake, where I had not been since, probably, 2006.  I wanted to get a few more photographs of the view of Mount Hood from there, to augment those from twelve years ago.  Inadvertently I found a great campsite, a few miles from Lost Lake, tucked in a small space in the forest, with a stream running through it.  For several years I have had a gravity system for water filtering that I had not used before, and so used it here for the first time.  All last year in the Southwestern Deserts I had been afraid of clogging up the filter pores with all that silt in those waters.  Here in the Cascades, I had a perfect water source.  I now have discovered a Millbank Bag that I received from England, which is used to filter out all the mud, silt, and detritus, from an “iffy” water source, and once the water has gone through that it can be finally filtered through the “gravity” system, to keep out all the microbial nasties.  So … if I ever get down to the Southwest again, I am prepared to filter water to my heart’s content, by first using the Millbank Bag, developed for the British Army; of course up  here in the Pacific Northwest, the Millbank Bag can be used when the river is full of glacial flour, as many are, coming off many of the high Cascade Volcanoes.

My last campsite was south of Timothy Lake, south of Mount Hood, with another creek running by.  I had stopped at Trillium Lake, which was a zoo, because it was a Sunday, and hot, and close enough to Portland that it’s an easy day trip up there … flotation devices were thick enough on the lake, that I might have been able to stroll across the lake, dry-shod, had I so desired.  I declined the opportunity.  Timothy Lake was a little better … it’s bigger, farther from Portland, and has four or five campgrounds, all full, to absorb the numbers.  Just two miles south of that lake, I had peace and quiet.  The next day I found my way down to the Clackamas River Road and followed the river down through Estacada, skirted the south side of Portland, and so back to the McMinnville area.


The next few weeks I spent catching up on things at my home base, getting work framed for galleries, posting my blog, etc., before I headed down to the south Oregon Coast and the annual Maritime Show at the Coos Museum of Art in mid-July, where I still am for the next few days.  It’s downright cold here, in the sixties and with a vicious north wind, but to me that is far preferable to the hundred degree weather, back in the Willamette Valley.