Take Note that some friends and family, who have signed up to receive email notifications, whenever this blog has a new posting, have not received these notifications for about a month, so I suggest that to receive further notifications that you re-sign to do so.  This is to those of you who have come manually to this site, wondering where I am, so please do sign up again.  I don’t have any idea why this would happen … perhaps hackers from you know where(!) … or Gremlins.


From snow in the morning on Winter Ridge, it was north to Fort Rock and the Hole in the Ground, and then 30 miles on forest roads to just off County Road 22, 20 miles east of La Pine, where I spent the night of 9th June.  The next day it was on into Bend, Oregon, for supplies on Sunday the 10th, and then into the Cascades southwest of Sisters, between that town and the Three Sisters trio & Broken Top Volcanoes.  The next four nights were spent on these forest roads, which I had never been on before.  There was a lot of old forest fire remnants, but this allowed me a certain  number of photo recon opportunities of the Sisters, that would have been obscured by living trees, so not picturesque photos, but there will be the possibility of future paintings with new forests of live trees … hey, I’m an Artist … that’s what we do … make art out of chaos.   After that it was up onto the Santiam Pass near Big Lake, and finally high up on a ridge above the Blue Pool on the McKenzie River, before finally pulling into McMinnville on June 14th, two weeks short of a year after leaving the Twin Cities … back at my Oregon base of operations.  The next day, on the Friday, I went to my post office box to collect 15 months of mail … not as much as I feared.  I have covered these last days briefly in writing, and will let the photos say more, on this home stretch to Yamhill County. 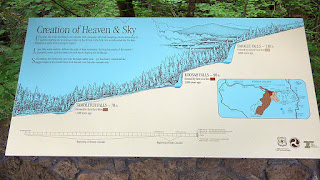 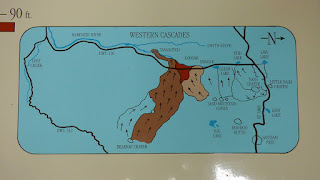 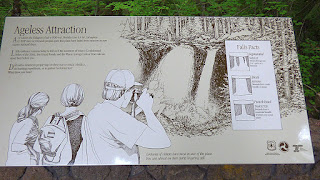 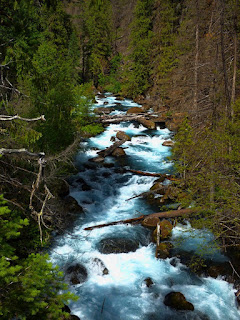 The Blue Pool … Tamolitch Falls; I’m told that the main falls on the left is normally dry as an upstream hydro-electric reservoir has by-passed this falls with a tunnel.  The ingress of water on the right occurs to a lesser extent from the original stream going underground, but many times the Blue Pool is partially dry.  I guess I was lucky, as there is work going on at the reservoir at present.  It’s a two mile hike through mostly old growth forest to see this beauty.