The Final Stretch to Yamhill County.

During most of this past year, I have been surprisingly unmolested by insect pests, for the most part; the following deals with those times that I did or are now having run-ins with.  The photographs are of the journey through Oregon, from crossing the border in the Warner Mountains to Yamhill County, and then the trip back from Seattle a couple days later.

While setting up camp in Lodgepoles, I was soon greeted by High Desert Oregon mosquitoes!  Out came the repellent, and up went the netting on all four side windows of the truck, and thus received only a few kisses from the pesky greeting committee.  So this brings onto the subject of insects.  Throughout my travels west, I have been surprisingly untroubled by insect pests.
However, in the end I did not get away from southern Utah scot free from the no-see-ums, you will remember that I mentioned in my May 15th post.  When they first began to hover around, I looked them up online, and read an extensive article about them.  The author said that they are a scourge from mid-May to mid-June, and that they always seemed to go for his ears, and also left red marks the size of a pencil eraser.  Since the ones I was spotting seemed to be just hovering about and not landing on my head or ears, I assumed that I might escape the area unmolested, but then I noticed red pencil eraser marks on my calves, which began to itch … they must have trickled up my loose trousers, when I was sitting in my camp chair painting; I never felt a bite.  I zapped the marks with my first aid cream, which helped relieve the itch for a time, and after a week to ten days the itching ceased altogether, but the pencil-eraser marks lasted for over three weeks.  I am one who does not scratch any insect bites; I rely on my hydro-cortisone cream.  Mosquito bites last for a day or two … these southern Utah gnats really take the cake.


In my first camp, after l left Great Basin National Park, below the Schell Creek Mountains, I discovered a tick in a very difficult place to see, let alone remove.  I remembered that some years ago I had purchased a “tick key,” by Coleman I believe.  It works.  Even though I could have used a third hand I managed to get the little blighted off.  First tick I have seen since I was a kid in the northern Wisconsin woods … we young boys would sometimes find one wandering on our bodies, while sitting in church, of all places, and pass it around.  It was a part of Northwoods life.  Now days there are tick-borne diseases you must worry about.  I looked up on line about them and determined that I probably need not worry, but for two weeks afterwards I inspected the bite area (it had left no mark at all), and applied triple antibiotic gel from my first aid kit.  Lyme disease, although there are cases out in the West, is still primarily an eastern and Great Lakes scourge.  The longest it could have been attached, would have been 24 hours.  It probably was resident in that valley below the Schell Creek Mountains, but could have been picked up on my walk in Great Basin National Park, in which case it would have been wandering about my truck for two days … possible I suppose.

And now back in the Pacific Northwest I have mosquitoes to contend with.  Some camps have them and some seem to be mosquito free.  They aren't as voracious as Minnesota mosquitoes (reminiscent of Cobra Gunships), or the legendary Alaskan denizens (similar to B-52s, I am reliably informed), but they do have their moments in some camps.  All three nights, in two different camps in the Warner Mountains, had them, but the next two nights, across the valley north of Lakeview, Oregon, were mosquito free; enough about insects.  I was in that camp while I awaited my appointment to have my front brake pads replaced.

But enough about insect pests … after camping in the Lodgepoles for two nights, my next camp was west of Drake Peak, in the northern Warners, near Buffalo Prairie.  While looking for a campsite, and driving along the north rim of the Prairie, I spotted a doe in silhouette at the bottom end of the screen of trees between the road and the open ground.  I stopped to get a photo or three, when it dashed off a few yards.  I thought she had finally decided I was a threat, even though my car was a hundred yards distant, and then in front of her I glimpsed a flash of brown, which I took to be a second deer, until it kept up into a tree!  The doe returned to where I had first seen it.  By and by the beast in the tree dropped to the ground and dashed away to the west.  The total time it had been in my sight was a maximum of two seconds … not a lot of time for an identification.  I racked my brains as to what I had glimpsed, and settled on a Fisher.  These are almost the same as Pine Martens, but a bit larger and huskier.  The doe, I believe, might have been protecting a fawn; this I surmised by its actions, for the possible fawn remained hidden.  I stopped into the Ranger Station at Lakeview a few days later, to enquire as to what it might have been that I spotted.  There are rumors of Fishers, in the Warner Mountains, and further west there was Fisher DNA in the contents of an autopsied Coyote’s stomach, but that was it.  Talking it over, we eliminated everything else, and left it open between a Marten of a Fisher.  Later I dug out my mammals book, and now I definitely lean heavily towards the Fisher.

Brake pads replaced, I made my way north on Hwy 131 from Lakeview, the “tallest town in Oregon (meaning the highest altitude, at 4800 feet),” to Paisley.  Here I climbed up into the mountains west of town, on the forest roads, towards Winter Ridge, and found a campsite just off the Slide Mountain Road, two thirds of the way up at the south end of the Ridge.  That evening and the next morning were first class, although the wind picked up in the afternoon as I made my way along Winter Ridge, to Fremont Point.  Here, at 3000' above Summer Lake below, I took photos, and then proceeded north on a forest road.  Back in 2010, and at the same time of year, this road had been impassable, and it almost was this time, but at two miles in, it improved, and there were two campsites, each with picnic tables.  Here I stopped for the night and managed to prepare supper, in spite of the wind.  A possibility of rain was in the forecast, and so there was … a light drizzle overnight, which turned to snow as I finished breakfast and headed out … and this on June 9th!  Well I was at 7000' here.  I found huge trees downed another mile along; Winter deadfalls. So I turned around and made my way the three miles back to Fremont Point, needing 4-wheel drive now in a couple of muddy spots.  Once on the main forest roads the going was OK, and so I enjoyed a taste of Winter … on Winter Ridge … in June!!!  A couple of inches fell as I drove along, and it gradually petered out as I descended west towards Thomas Lake, 15 miles away and a couple thousand feet below.  I asked people camping there if they had had any flurries, but only a bit of rain had fallen there. 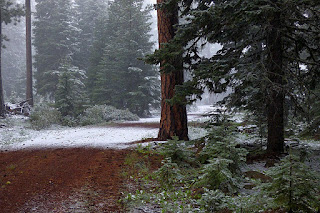 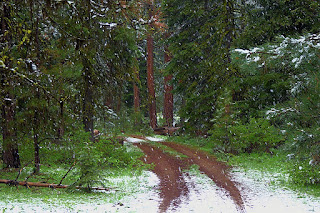