On to Bryce Canyon National Park, just up the Road.

After the rain, road out probably would have been OK to attempt on the Sunday, but I came out on the Monday, nevertheless, and the road was just fine.  Proceeding the rest of the way through Cottonwood Canyon, I stopped briefly, on my way to Bryce Canyon National Park, in the small town of Tropic for a few supplies.  Next to the combination grocery store and petrol station, there was also a hardware store, so I popped in to pick up a mouse trap.  Yes folks, after all these years of camping in the mountains, forests and deserts of the Pacific Northwest, east to the Upper Peninsula of Michigan and across the Great Plains and Sand Hills of Nebraska, into the Rocky Mountains of Colorado and Wyoming, and as far south as East central Arizona, I finally had a desert mouse hitch a ride with me for four days.

I`m pretty sure it was on Thursday night, after my walk through the Hackberry Canyon, when it was so warm that I sat in the driver’s seat with the door open, drinking my hot chocolate, and working on my blog, that he jumped into the truck.  I remember lying on my back in the Boundary Waters Canoe Area Wilderness (BWCAW), back in `93, with my Brother Doug, his wife Karin, and my Mom, counting meteors of the Perseid Meteor Shower, when every so often the occasional deer mouse would land on the middle of my chest, at the end of his leap … yes, some mice can jump.

I did not see this desert mouse enter the vehicle, and I wasn't sure that there was one with me until two mornings later, when I found some paper towels that had been nibbled on.  But, on the night in question, sitting in the dark with the door open, I was startled when I thought I felt something land on my left knee.  And then a couple more times that evening, and the next, I thought I felt something on my leg, but saw nothing by the time I got my headlamp turned on.  As I say, the nibbled paper gave it away, as well as a couple of droppings.  So on the Monday, I set two traps, baited with chocolate covered raisins, and placed one on the dash board and one on the floor of the driver’s seat, before turning in.  As I was dropping off to sleep, I heard one go.  Thus roused, I checked which one had gone off, and it was the one in the footwell, so stretching down I opened the door and tossed it out into the night to deal with in the morning … the other one remained set all night, so it was just the one.  Chocolate covered raisins have never let me down in any house in which I’ve ever needed to use a trap; and now out in the wild … gets `em every time.  I have heard of traps that catch them alive, and I will have to look into that as I do not wish to kill the wildlife, but I could not have this critter infesting my truck … I mean … four days with him was enough!

ß  Note the pinkish orange; the Sinking Ship (yes, the Grand Canyon doesn’t have a monopoly on sinking ships), is the slanted butte in the distance.  On the horizon is the Aquarius Plateau, 30 miles distant.  The rock formations are the same, but it is at ten thousand feet, whereas we are at eight; the Paria Fault lies between and where we are standing has dropped two thousand feet. 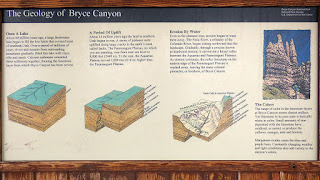 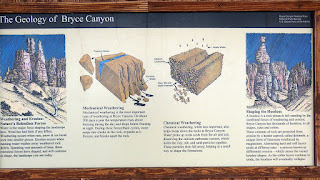 There is more to Bryce Canyon National Park than I had thought; but then I didn’t know much more about it than the postcard I had once received, and a few photos I had seen, on occasion, over the years, here and there.  The pink and white sandstones of the Clarion Formation form the topmost riser of the Grand Staircase Escalante, known as the pink cliffs, and Bryce Canyon National Park occupies one section of these pink cliffs, where the conditions were just right for the formation of the myriad, phantasmal sandstone columns known as hoodoos.  If you remember my couple of days spent in Recapture Pocket, east of Bluff, Utah, amongst the more personal sized hoodoos you will already be familiar with these formations.  What sets Bryce Canyon apart is not only the shear size and quantity of these formations, but the beauty of their pastel pinks, oranges yellows and whites, forming a veritable fairyland.  They positively glow, with direct and reflected light.  It is this pastel glow, seemingly from within, that sets this place apart from all the iterations that the red rock country displays throughout Utah and the southwest.  What I really like about Bryce is the complementary contrasts between the orange/pink rocks and the forest greens.

The photographs will speak for themselves. 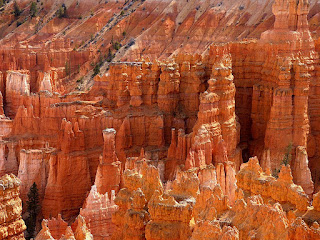 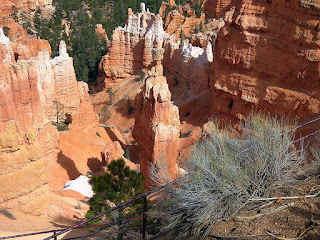 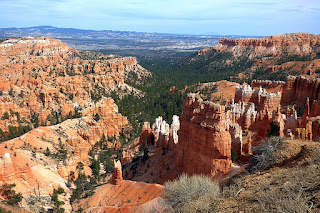 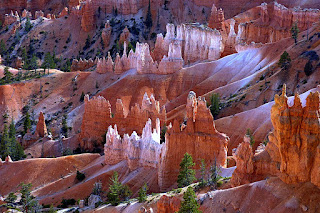 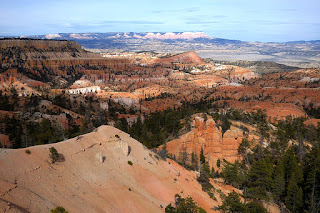 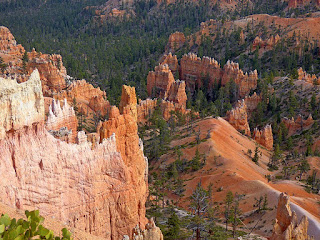 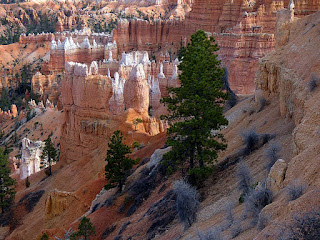 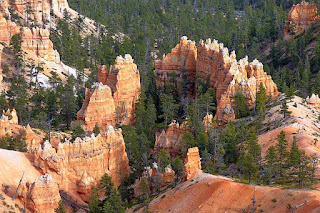 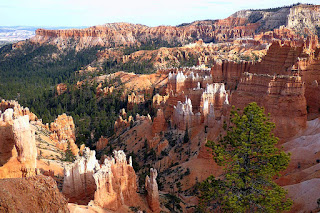 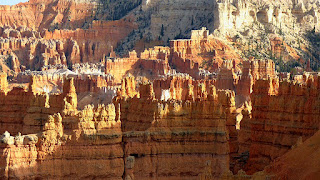 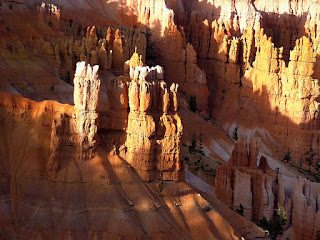 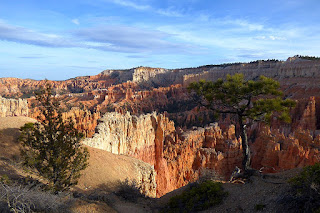 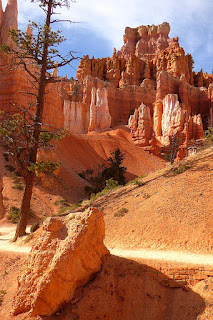 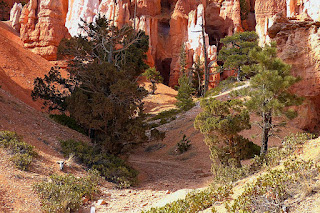 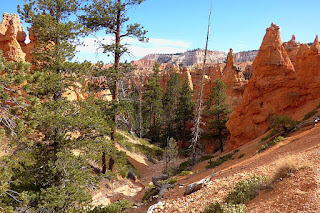 And of course just after I thought it safe to put away my Winter clothes, the old man Frost pulls off another blast, forcing me into my long-johns, and breaking out the Sorel boots and mad-trappers hat, once again, on Thursday April 12th!  The cold, windy conditions, and snow showers seemed to bring the deer out to graze along the Park roads, and several Pronghorns were spotted as well.  Cold and partly sunny when I left on Friday, and as I took State Hwy 14 to Cedar City, passing the south entry road (closed), leading to Cedar Breaks National Monument, the high country was still completely snow covered, and Navajo Lake was still completely frozen over.  Bryce is between 8000’, rising to 9000', in altitude, but Hwy 14 rises to around 10,000', but I still did not expect that amount of snow up there.  That night's camp was about thirty miles south of Cedar City (where I replaced my phone, which had died on April 1st), just inside the Dixie National Forest, at about 4200'; much warmer, and the Winter clothes have once again been shed. 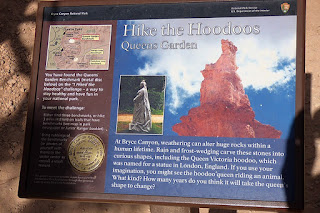 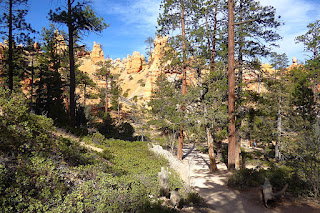 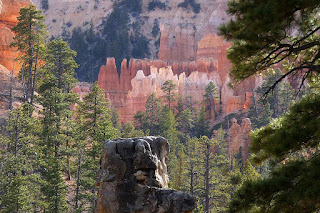 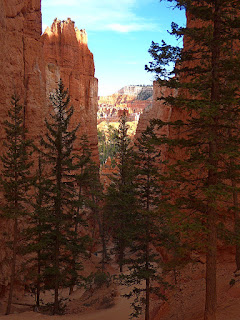 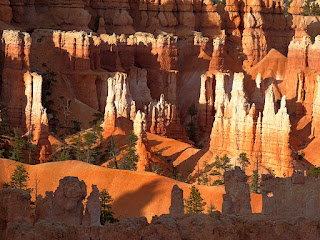 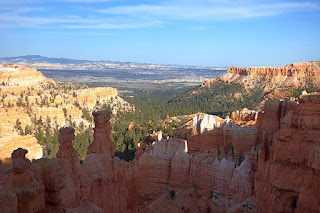 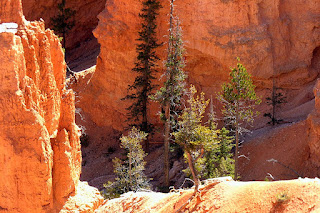 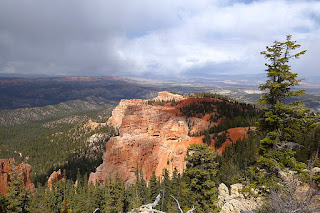 About 35 miles west of Bryce, as the Raven flies, and a couple thousand feet higher ... altitude makes all the difference!
Posted by Not Quite a Painting a Day at 00:00