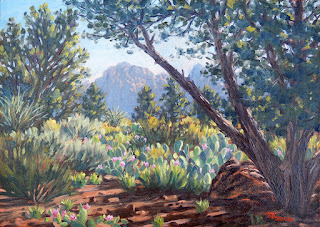 This is my view every morning that I have camped north of the Eagle Crags Trailhead.  It has been delightful to watch the changing light as the mornings progressed, and also the cactus blooms coming into their own as the days passed by.  When I arrived I was not sure whether the little knobs on the Prickly Pears were new pads or flower buds … pretty much the latter.  The mountain in the distance is Johnson Mountain, I believe, which is in the southern part of Zion National Park.  Between here and there lies the East Virgin River; just below Springdale it flows into the Virgin River, which is that which flows through the Canyon of Zion proper.

My camp just south of Zion National Park is at the end of a steep desperate road below Eagle Crags, not far past the trailhead for the Crags; 4-wheel drive and high clearance a necessity.  Here at 4300', several small wildflowers are in bloom, and the prickly pear cacti are showing new growths; whether flower buds or new pads I’m not yet sure.  In Zion all the Cottonwoods are fully clothed in leaves, whereas a week ago in Cottonwood Canyon, they were only just opening their buds, except for those in sheltered spots, but then Cottonwood is 2000' higher.  It’s so interesting to see how these different situations affect the natural world, and even more so to observe the micro-climates that may be found within them.

Here at Zion the geology is younger than the youngest formations at the top of the Grand Canyon, but older than those at Bryce.  The major rock formation on the canyon walls at Zion, sometimes as much as two thousand feet, is the Navajo Sandstone, first encountered at Arches National Park, in the form of petrified dunes, and which also formed the canyon walls on my second walk through the slot canyon in Cottonwood Wash several days ago.  I would also point out that back in Dinosaur National Monument the Nugget Sandstone there, is equivalent to these Navajo formations. 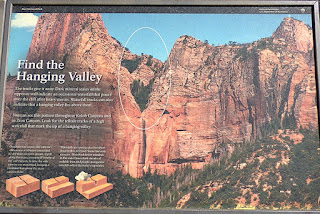 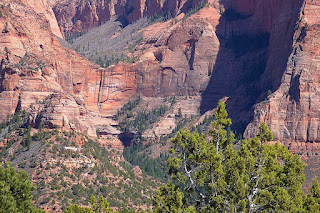 To reach my camp, near the Eagle Crags Trailhead, is a very steep climb, on a very rutted, rocky road.  As one ascends you pass through the chocolate coloured Moenkopi Formation of early Triassic times, then over the ledge of the Shinarump Conglomerate Member of the Chinle Formation, also of Triassic age.  The Triassic was when the Dinosaurs were beginning to establish their hold on the world, but there were still some nasty amphibians about, they had to keep a watchful eye out for.  The Moenkopi Formation is composed of mud and silt sediments along a coastal mudflat environment, being distributed lugubriously by lazy streams and rivers and tidal channels.  Later more continental conditions took over the landscape, and coarse sands and small pebbles were deposited by braided river channels, forming the Shinarump Conglomerate Member of the Chinle Formation.


So, my present camp lies above that, within later members of the Triassic Chinle Formation.  If I walk north a few yards I can trace these formations (Moenkopi & Shinarump), across the valley towards Zion National Park, dipping slightly down towards the northeast and disappearing beneath the present surface somewhere in Springdale, the town just south of the Park entrance [An aside: the Chinle is what makes up the coloured layers of the Petrified Forest, I passed through back in mid-February].  Above them l can see the slope forming Chinle, the cliffs and slopes of the Jurassic Kayenta Sandstone, and finally the massive cliffs of the Navajo Sandstone (also Jurassic), the latter up to 2000’ in thickness; interesting to think that these Navajo Sandstones were once part of a vast dune field stretching from Arizona into Wyoming.  Here and there are bits of the Temple Cap Formation above the Navajo Sandstone … I can see West Temple, easily, which can also be seen from within the Park itself, from various places. 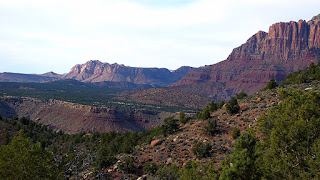 The foreground slopes are part of the Chinle Formation; beyond that in the left middle distance is a cliff sloping down towards the right … that is the Shinarump Conglomerate Member of the Chinle, above the Moenkopi; the slopes above the Shinarump are of the  Chinle Formation, above which are to be seen the ledgy band of cliffs of the Springdale Sandstone Member of the Kayenta Formation; the slopes above that leading to the high cliffs on the right is the main Kayenta Formation, and those high cliffs on the right are the Navajo Sandstone which once were sand dunes.  This view is on the way to my campsite. 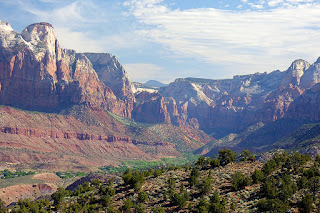 But here where I am, within the Chinle Formation, I see large slabs and boulders scattered about on the surface, or seemingly erupting out from the earth, at random angles.  My assumption is that the soil surface here is (1) the remnants of eroded Kayenta and Navajo Sandstones, (2) or blown in from elsewhere (3) or probably both, but the slabs and boulders are surely of Kayenta and Navajo origin.  To the southeast are the Eagle Crags, and the shattered spires at the top appear to be the remnants of the Navajo Sandstone layers, the Kayenta being the eroded slopes below that.  It was the slabs and boulders dotted about (I’m sitting in the shade of one as I write), that got me to wondering about why they were there, and so I began to apply my, strictly amateur, geologist eye to the problem.  I have had a crash course in geology over this past Winter, travelling through this geological wonderland that is the Colorado Plateau, centered on the 4-corners (for you British, that’s where Utah, Colorado, New Mexico and Arizona meet).  A year ago, I would not have been able to work this out. 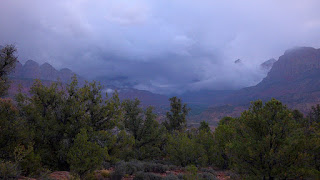 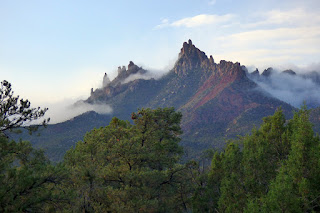 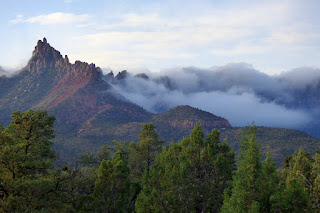 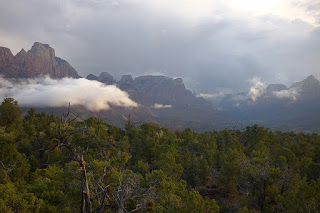 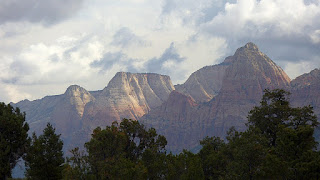 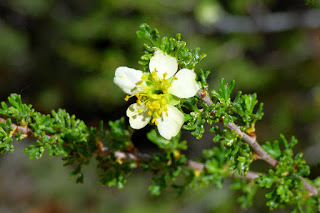 Much of my campsite area is covered with these bushes, but they don’t all have flowers.

Three and a half months ago, while camped in the Valley of the Gods, I would watch the brightest star in our heavens, Sirius, pop into view over the canyon rim, not long after sunset.  Now I see it lowering into the southwest about the same length of time after sunset and about the same altitude, and soon to be setting.  These stars of Winter do not remain long in our night sky, whereas the stars of Summer seem to last so much longer.  With Sirius it is its more southerly aspect, and also the days are getting longer, in the Springtime, and so Sirius and the other Winter stars have less night to work with, whereas the Summer stars last long into the Autumn, and some even into early Winter, as the nights get longer at that time of the year; of course the opposite is true if you live down under.  So in a short time Sirius will be gone from the evening sky, just as Orion, for the most part, already is.