Snow in the Desert

The day after my last posting, revisited a couple of trails, and a new one from the Devil’s Garden Campground to Tapestry Arch to the back side of Broken Arch, through that one, and circling back through some fins to my car.  I had done the walk to Broken Arch from the front side earlier in my sojourn in the Arches National Park area.  On this last walk the day’s overcast was beginning to clear away allowing some wonderful late afternoon light to flood the landscape.  By the time I reached my SUV it was about 45 minutes to Sundown, so I prepared and ate supper in the picnic area at the Devil’s Garden.  Here I was also able to fill my water bottles, the only available water in the Park other than at the Visitor Center near the main entrance.  By the time I returned to my dispersed campsite, it was dark, and so I put on my headlamp, turned to the red light setting, and scanned the sagebrush, looking for eyes … there were.  I turned the light to bright white in time to spot the Bobcat that had strolled through my camp two days before, and who now scurried off when I said “I see you!”


I had checked the Weather Underground on my way back to camp and there was a bit of snow in the forecast, amounting to about an inch.  I wondered whether we would get any as there were lots of stars poking through the cloud breaks, and the sunset had been good.  When I awoke on the morning of the 21st, and looked at my watch, I was thinking it should be a bit brighter than it seemed to be.  Snow covered all my window; four inches of it I soon discovered.  There was a bit of a break, but while I breakfasted, it began anew, and when it lightened up at about 13:00, another four inches had fallen.  I gingerly drove out of camp the 3-1/2 miles to the primitive loo at the Klondike Bluffs trailhead.  It was fairly straightforward driving through the virgin snow, only needing my 2-wheel drive through the 8” snowfall. On my return journey I stopped at the usual spot where I had Internet access, and dashed off a few emails, and checked the Weather again … the snowfall was over, and the next day was set to be sunny.


And it was.  I decided I had better try to get out of the snowy wilds as the wash the road passed through to get to Klondike Bluffs, from the main Park road, was said to be impassable when wet.  I debated whether to go the 10 or 12 miles north to the highway, which I had never done, or attempt the usual route through the wash and up the 3 mile long hill to the main Park road, near the Devil’s Garden.  I headed along the usual route, following my own tire tracks past Klondike Bluffs, then through the powdery virgin snow, stopping now and then to study animal tracks crossing the road.  The snow was too powdery make identification, other than those rodent tracks heading to and from their burrows, a few bird tracks, including wing impressions at the entrance to one burrow … I wonder if the denizen of the den was captured. The larger trails I suspect were of deer.
Then down into the wash for several hundred yards, and now for the first time, I put ‘er into 4-wheel drive as began the long incline up to the blacktop.  It was quite a slog, but I made it to the top, and found the gate closed as I had feared it might be.  On close inspection, I discovered that the padlock had not been closed; it only looked so from a little distance.  I passed through and replaced the lock as I had found it.

I had the Park all to myself for 5 hours, taking snow photos, as they had closed it for snowplowing.  No wonder those snowplows I waved to as I passed by looked at me strangely.  I saw my first car, and then a second, and then a flurry as I neared Balanced Rock.

The next two nights were spent on Willow Springs Road, where I had spent a few nights in early November.  The intervening day was spent going to see “The Last Jedi,” which I found very enjoyable.  The second morning I awoke at this new campsite was cold … about 8°F … but it must have been a damp cold as it felt so much colder than it was.  When I climbed up to the visitors center, in the Island in the Sky section of Canyonlands National Park, I discovered that it had been only down to 28°F that morning … 20 degrees warmer than down below!  Evidently, it often is warmer in the Winter up there than down in Moab, a couple thousand feet below, in its bowl where all the cold air flows down to and settles.  That made up my mind for me … I would stay in the National Park Campground, at Willow Flats (as opposed to Willow Springs Road), over Christmas.


Island in the Sky is a very irregular mesa top, with an altitude averaging 6000’, with overlooks into the canyon systems of the Colorado and Green Rivers, whose confluence lies a few miles to the south.  There are a few actual glimpses of the Green.  Funny to think I was near the headwaters of the Green but four months ago when camping at Mosquito Lake in the northern Wind River Range, and it was the same Green that passes through the Gates of Lodore, and Split Mountain, both of which I saw when in Dinosaur National Monument.  The colours on the cliffs, in the sunlight, seen from these various Canyonlands viewpoints are wonderful, especially early or late in the day.

The most interesting trail for me is the one to the Upheaval Dome overlooks.  In a nutshell, there are two theories of its origin.  One says that a salt dome pushed up and cracked the rocks above, and the other is that it was formed by a meteor strike.  I plump for the latter, because of the double ring surrounding the hilly mass in the center, highly reminiscent of the craters on the Moon.  It was discussed with others at the first overlook and we decided … definitely a meteor!  Take note, you at the National Geological Office.  Next is the Needles district of Canyonlands. 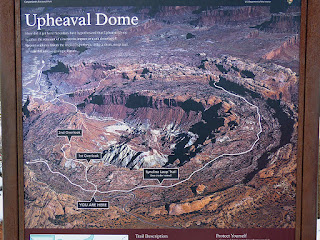 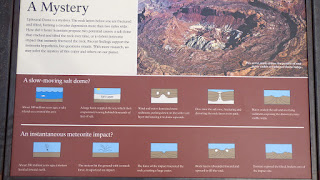