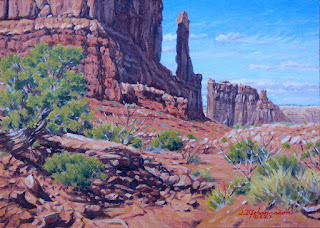 It’s all over down here in southern Utah … Red Rocks … ancient sedimentary rock.  That doesn’t mean there are not other colours present in this geological landscape, there are; yellow ochres, browns, tans and even greens, but red is the predominate colour one thinks about once darkness falls and the day is considered before sleep.  This makes for a very interesting landscape of contrasting colours, with the greens of the Junipers, Pinyon Pines, Sagebrush and other bushes complementing the earth red rocks; kind of like subdued Christmas colours everywhere.


The cliffs especially glow at sundown, almost on fire, and I have observed most clear evenings, about twenty to thirty minutes after the sun has set, the cliffs radiating a different sort of glow seemingly from within while the rest of the landscape and the sky are darkened with the dusk.  This glow seems to last about ten or so minutes.

And once the darkness descends, the Stars sparkle and the Milky Way shines in the night sky as diamond dust on deep blue velvet.  When We were younger, before the night skies were filled with the smoke and dust of the Industrial Revolution and before Edison’s light bulbs pushed back the glorious dark of the Night, We all had skies like these.  One of the interesting things about camping in the same spot for a period of time as I have been recently is observing the celestial mechanics of the night sky in action.  Even though I have known these things, having always been interested in Astronomy (Astronomy … not Astrology), to watch the same stars rise at the same point on the horizon night after night, but approximately four minutes earlier every night, is a lesson about the annual revolution of the Earth around the Sun.  Four minutes each night means that after fifteen days have passed, the same star is rising one hour earlier than it was, and thus multiply that hour by 24 hours, a year will have passed and the star will be rising at the same time that it did when you began your observations.  Of course you won’t be able to keep up your observations of any particular star when it rises during the day, but watching it rise a whole hour earlier after only fifteen days, and you begin to get the picture.  So there you are, then.


In the painting (at top) the butte in the distance is known as the Tower of Babel (no I don’t know why), and the pillar of rock in the center has no name that I have discovered.  The Pigments used in the painting are the usual ones I’ve been using recently in this Red Rock Country:

Rublev: Ercolano Red, Purple Ochre, Orange Molybdate, Lead White #1.
Posted by Not Quite a Painting a Day at 14:52