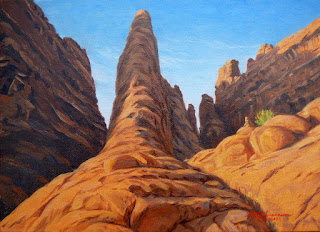 I was hiking the 7.2 mile long Dark Angel Primitive Trail, when I climbed onto the back of this sandstone Orca; or perhaps it was a Dolphin.  Arches National Park is full of these fins.  That is what makes this park what it is, for these are where the arches themselves are formed … all 2000 of them, by all accounts.

Back in the Paleozoic times this area was a shallow sea almost surrounded by land, and went through many evaporation cycles building up layers of salt thousands of feet deep.  These were later covered by layers of sediments, and dunes turning to sandstones.  Salt is ductile at low temperatures, and as the layers of rock above exerted pressure, the salt began to migrate upwards forming salt walls 2000 feet thick in places.  As these walls approached the surface, they were leached out which caused the above layers to collapse into the spaces previously occupied by the salt walls.  Salt Valley, where I am currently encamped outside Arches National Park, is one of these collapsed areas.  As the collapse took place the layers of sandstone on the periphery were bent over and the rocks split into series of parallel fractures, which over the eons have been eroded into the ‘fins’ seen today.  And that is the geology of Arches in a nutshell.  There is more of course, and a geologist will no doubt explain it better, and no doubt quibble with my layman’s account, but hey!  I’m an Artist.

Delicate Arch, which I posted my painting of last time, is both an arch and the last remnants of a fin, which in my book makes it all the more interesting.  I did go on the Delicate Arch Trail again on Saturday the 2nd, and observed the Moonrise, as I intimated I would.  At this time of the year it rises much further north so there is not a chance of getting it in the same photo with the arch from the usual viewpoints, but it was still a fine view.  I made it back down the trail completely by Moonlight, even though I remembered to bring my headlamp this time … I wanted to see if I could do it … and so I did.


And not forgetting the Tech-heads ... the Pigments used in the painting were,

Rublev: Ercolano Red, Purple Ochre, Lead White #1.
Posted by Not Quite a Painting a Day at 14:51