Moonlight in the Garden of Eden. 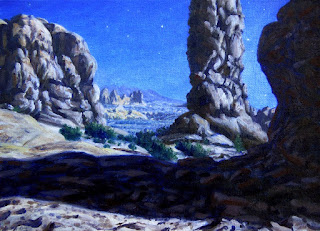 Night in the wild places, especially under the light of the Moon, is truly magical, especially when not an artificial lamp is to be seen, and so a sketch, or perhaps it is a study, is attempted.  Once your night eyes have adjusted over a hour or so (no don’t look at the Moon itself), it seems as bright as daylight.  Here the La Sal Mountains are in the distance, lurking beyond the far fins, and here in the foreground the pillars and fins of the Garden of Eden throw inky shadows across the uneven ground.  Perhaps it is called the Garden of Eden because it is a primordial landscape, and we will accept that explanation, even though it does not seem Edenic to me as I usually think of lush forest when thinking of that term.

The last few days, without the Moon to interfere, it has been so interesting to watch the horizon, and see first the star Castor, and then its twin, Pollux, pop into view 28 minutes later, and each of them rising 4 minutes earlier every consecutive evening.  Another couple of weeks they will be rising in the twilight hours, but I will have moved on and won’t have the same horizon line to watch.  It is the “popping into view” at the expected time that I find fun … “pop” … and there it is Castor, and 28 minutes later, “pop” … Pollux!

And speaking of the wild, yesterday as I was working on this painting, a Wildcat strolled through my camp, not thirty feet away, nonchalantly, a true feline, not even looking at my vehicle.  No … I did not get a photograph.  By the time I downed the paintbox, got the camera out and quietly opened the door, all I saw of it was the top of its head or back occasionally above the sagebrush, with no full views before it disappeared a hundred yards away.  I was hoping for it to cross an open space so I could get a shot with my magic camera, but t’was not to be.  It was lynx-like, not a Bobcat, and about twice as large as the biggest house cat I have ever seen; a first for me!  My resident rabbit was munching away this morning, so she weathered the intrusion safely.  I wonder if the Wildcat had already studied my truck before strolling down through my camp?  I guess it was a Bobcat … just Googled up the info.