Into the Redwoods Country 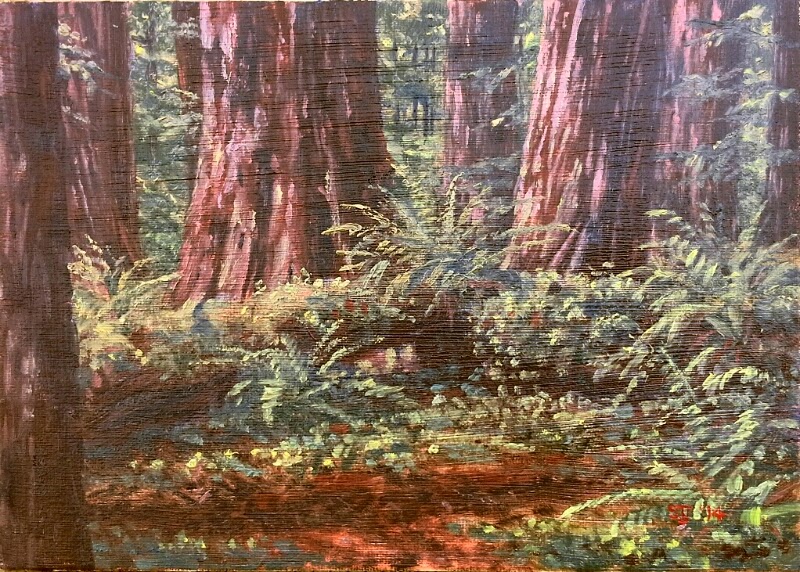 (Take Note: for those of you who have signed up to be notified by email of new postings to this blog, you have been receiving not just a notification, but an actual copy of the new blog posting as the email. As this does not show the images of the paintings in the best possible light, you should click on the title of the latest posting, to open up the actual blog itself, and enjoy the paintings at their best.)

Down on the coast the wind had dropped after five days, but I had a blog post to get out, a lot of emails to clear, since I had not been into the library for a week, and resupply to take care of, and so that was the Friday taken care of. In the evening I watched the moon & stars and worked a bit on another blog post, intending to fire it off early in the morning at the library before getting out to paint. It was still and quiet in the forest, save for the occasional hooting of a Great Horned Owl somewhere off amongst the trees, and I kept my ears attuned for any sound that might alert me to any furry visitor that might wander by, and kept my bear spray at hand, while I worked, and watched the night sky.

The next morning the new blog post was checked and tidied up before leaving camp, and off I went to post it at the Brookings library. That one did not get posted, but the one entitled "Monitors" did. My screen had been black when i opened it at the library, and three hours had been wasted trying to work out what might be wrong and seeing if I might be able to fix it myself, should that have been possible; but I had detected a ghost image of my desktop on the screen. I reasoned that it would be brighter in the dark of the forest night, and so I went out to the coast and ended up drawing in my sketchbook and taking photos at Lone Ranch Beach ... and worrying about the computer. And that night in camp I opened up the laptop, turned it on with bated breath, and ... nothing! I turned on my Petzl headlamp, and noticed that when the light was held close to the screen that the ghost image appeared. With great difficulty (the screen being so dim I kept losing the cursor), I managed to transfer recent photographs and scans to my exterior hard drive. That ability also told me that it was a screen problem and not anything to do with the hard drive itself; it could have been worse.

Bright and early the next morning (Sunday by now), a final check of my campsite was done as I prepared to head out for a day of painting, when I noticed my very important notebook, containing all the information for each new painting begun, was not in it's usual place. Five hours were spent rifling through the truck, visiting the various places where I might have dropped it after last being seen at the library the day before (but closed on Sundays), and inquiring at the state park offices on the chance it might have been turned in, with no success. I have gone on at length with the foregoing to illustrate that it is not all straightforward painting and drawing, and enjoying the Great Outdoors, but that the best laid plans often go astray, just as in normal life. But there is an important difference, between camp life and normal life, and that is that in camp life the Sun, or lack thereof plays a more important role, and thus I can no longer work late into the night painting as I used to do. Therefore days such as the previous two are very disruptive to the work. Incidently, the notebook was found two days later, where I had placed it for safekeeping; a case of self inflicted wounds!

To make use of the rest of the day I went down to the Winchuck River, just north of the California border, and stopped in to the National Forest Information Bureau, to enquire about the lonely grove of Redwood trees on the Oregon side of the border, thinking that the recent time lost over the past two days would negate my former plans to go on down below the border to see the Redwoods in northern California. They informed me that although the Oregon grove was a beautiful walk in itself, there was no comparison to those groves 45 minutes away at the Jedediah Smith Redwoods State Park outside Crescent City, California. It being mid-afternoon by this time, I opted for the Oregon Redwoods 6 miles away up the Winchuck River. It was a beautiful forest stroll of about a mile and a half, stopping occasionally to drink in the forest, attempt photos, and the odd drawing. The night was spent at the Trailhead, as I had decided to take in the Redwoods at Jedediah Smith on the morrow, and here was a convenient place to start from in the morning; this is one of the advantages of mobile camp life ... opportunities of the moment acted upon.

In the next posting I hope to wax lyrical about astonishing trees, but since I have included the first of my Redwood paintings above, I give the following information for the tech-heads and the interested amongst you. Although an Earth Red imprimatura is used quite often in my work, here is the perfect case for the use of such Earth Red (Terra Rosa in this case) underpaint layers; the quiet red helps the overlying and complementary greens to sing, and any spots where the following layers might be missed in the more rapid application of paint in a sketch, the red that shows through the above layers unifies rather than jars, as would a bright white priming with no overlying imprimatura. The block-in was done with Ultramarine, and other pigments used were Yellow Ochre, Naples Yellow Genuine (by Vasari), Venetian Red, Cerulean, Cobalt & Ultramarine Blues (to mix the greens), and Cremnitz White (all colours by W&N, except where otherwise stated).