Once more into The Redwoods Country, Dear Friends 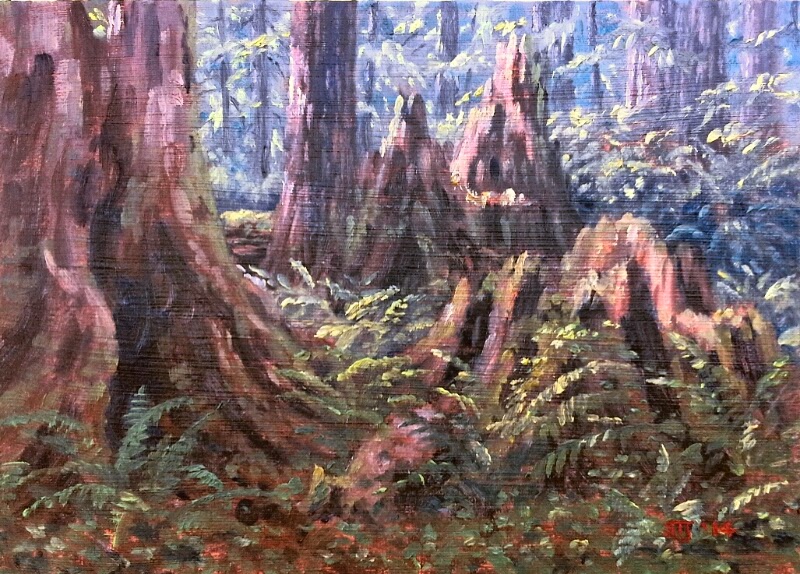 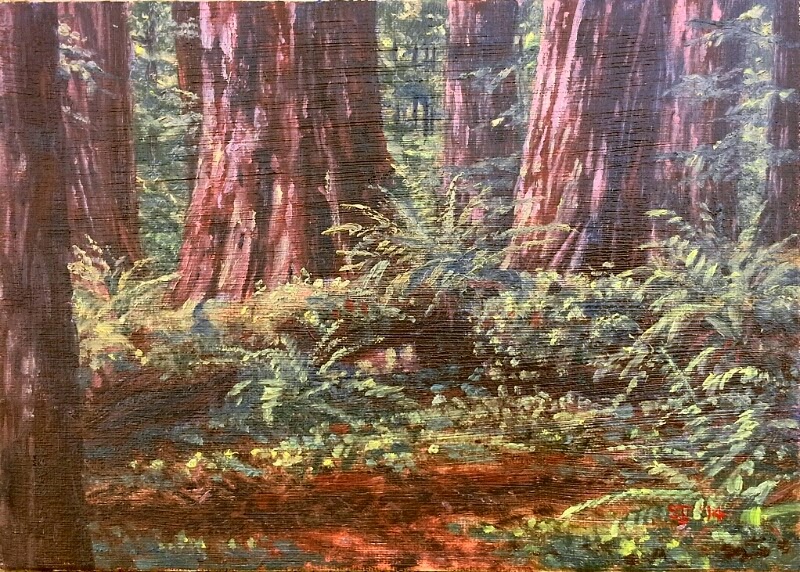 (Take Note: for those of you who have signed up to be notified by email of new postings to this blog, you have been receiving not just a notification, but an actual copy of the new blog posting as the email. As this does not show the images of the paintings in the best possible light, you should click on the title of the latest posting, to open up the actual blog itself, and enjoy the paintings at their best.)

You will have noticed the inclusion of the image from the previous posting, since the Redwoods will be the topic of the present essay in this journal. Having spent the night at the Oregon Redwoods trailhead, and breakfasted, I got underway and arrived at the information bureau of the Jedediah Smith Redwoods State Park, after successfully negotiating "customs" at the California State Border; it never ceases to amuse me of this quaint Californian tradition! For those who have never crossed the CA State Line, one must stop at an inspection booth, where you are asked whether you are carrying any ... fresh fruit or vegetables, not grass, hash or cocaine ... but fresh fruit or vegetables! Okay I suppose they have their reasons, but I'm always waiting for the Monty Python's Team to pop out of the bushes ... they never do. This time I discovered that the fresh "fruit or vegetables" involved are those from farmer's markets or pick your own establishments, and not usually those from super markets ... except when certain of these categories are on the "watch list;" cherries this time. I had nothing fresh with me, other than myself, being partially ripe, it having been three days since my weekly shower, and I successfully passed through. I must add for the peace of mind of those of you out there of a delicate disposition, that although I visit a State Park Campground once a week and pay my $2 to have a hot shower, I do wash me essentials daily with 80/20 mixture of Witch Hazel and Isopropyl Alcohol, thus slaughtering untold millions of oder producing microbes ... I learned that trick on line from some hard-core outdoor site ... isn't technology wonderful? I have greatly digressed.

After a little time at the info bureau, I proceeded to enter the Park proper. The road was gravel, and everything was dust coated within a few yards of the roadway, but nevertheless the trees took your breath away as the road wound around and through groupings of the massive trunks. After a couple hundred yards, or so, the truck was parked and an unofficial footpath was followed into the trees and past the dustline. Not a few minutes were spent there getting a feel for the Forest, and thinking about how to tackle this subject with paint. This continued to be mulled over while continuing the meander along the road, pulling over occasionally to contemplate the awesomeness of this Wood! Awsome is what it was, and I use it in this case in spite of the term having been devalued by over use in the common language over the past 25 years or so. But take the word and think about its true meaning as you read it here ... Awesome ... causing feelings of fear and wonder (and reverence) ... full of awe ... or put it another way, as though you were back in England, "Oi ... Oi wuz gob-smacked, Guv'nor!" That being translated would be, "I ... I was greatly impressed, Boss!"

The Stout Grove of Redwoods was reached and finding a parking space on the 2nd time around the small parking area, lunch was eaten, and then a stroll begun through the grove. Five years ago I first visited the Redwoods of northern California,to the Ladybird Johnson Grove & to the Tall Trees Grove, the latter only approached by receiving a limited permit and the combination to a locked gate (the number changed daily), which gets you onto a 9 mile desperate dirt road, and the trailhead at its end, and then ahalf a mile walk and dropping 400' in altitude, finally arriving at the Tall Trees themselves. They were impressive, but there is something about the Jed Smith Redwoods that seemed to touch me more; something more intimate maybe, even though the trees seem to be as massive as those I remember from the Tall Trees. It might be that there is more of a feeling of being within a whole forest of these giants, since the road does wind 6 or more miles through them, and the Stout Grove in particular seems to have closer groupings, and thus a greater intimacy. There seemed to be the ability to capture the feel of these giants on camera (if that's at all possible)here, unlike the Ladybird Johnson Grove where there were so many native Rhodadendrons, that made up the understory, that it was next to impossible to find a shot that did those trees justice. One thing I do remember about the Tall Trees Grove was the widowmaker stuck in the ground here and there, these being limbs from on high that had broken off at some time and in falling had driven themselves into the earth like Olympian spears; one hoped to hear the cracking of a branch first in warning were this to occur during one's stroll!

I found a space off the main footpaths where I could contemplate, and where some of these thoughts began to solidify. Here I collected my thoughts, and perhaps it would be here that I might try my first Oil Sketch of these venerable Grandfathers; but not until the next day; I realized I needed this day to just absorb their impact upon me. In their own way they are as impressive as the Grand Canyon, which first I saw in October last. And so on this day I walked, and looked, and saw these awesome trees, contemplating how I might attempt to do them justice, and drove slowly through the remainder of the Forest, stopping to just look, and walking on further trails, and taking it all in.

Forests are places of wonder, but unless you encountered them and came to terms with them at a young age it is probable that you will never understand this ineffable truth. And they come in different flavors ... my favorite flavor of forest is the northern boreal forest surrounding the upper Great Lakes, especially that found in northeastern Minnesota and extending across ancient rocks of the Canadian Shield to the Hudson's Bay area. There is to be found that unique combination of deep, dark woods and the light and openess of water in the form of numerous lakes, ponds and rivers. These were my first forests and will always hold the number one place in my being, even though their trees do not approach the size of most of those in the Pacific Nortwest west of the Cascades Range; but there is ample wonder there ... and here is ample wonder too, amongst these giant Redwoods; most would say more-so, and I wouldn't disagree save that they were not my first forest. And here I am now within this forest of magnificence ... contemplating ... wondering.

Thus the next day, on the Tuesday, I returned from my latest forest road campsite, and painted the above two Oil Sketches. During my musings of the previous day, I had decided on several possible places to paint, the first of which was that place off the main pathways in the Stout Grove, mentioned earlier (this would be image "C1567" the painting in the last post published before this one, and the second image above). The size of these massive trees would have to be suggested from just the lowest sections of their trunks, which would take up large portions of the composition, and this should begin to hint that these were not your everyday Douglas Firs or Western Hemlocks being depicted, but something else again entirely. The clumps of ferns at their bases would serve to suggest their scale as well. Seen through the foreground trunks in the distance, there appear smaller ordinary species, and these also provide a foil to the true giants close to. Hopefully this has all helped to indicate the scale of these wonders.

In the afternoon I moved on to one of the other trails I had walked the day before as these stumps had caught my eye, as another way to deal with the sheer size of the Redwood, along with those methods in the first sketch. The two stumps on the fight are about 8' in diameter and the one on the left shows only about half of its 15' width. The trunk just left of center, extending upwards out of the picture, is an offspring of the far stump and perhaps got its start before the main tree fell. Most of these giants are clones of those immediately surrounding them, and come from the same growth. Only one out of a million Redwoods actually grow from the seeds found in their tiny olive sized cones, as I overheard a ranger say to a group walking in the Stout Grove.

As I said in the last posting, the red earth pigment Terra Rosa was used as the imprimatura, on both these sketches, and the block-ins were done with Ultramarine. The other pigments used were Yellow Ochre, Naples Yellow Genuine (by Vasari), Venetian Red, Cerulean, Cobalt & Ultramarine Blues (to mix the greens), and Cremnitz White (all colours by W&N, except where otherwise stated). A bit of Cadmium Yellow was also used in C1568 (the stumps).