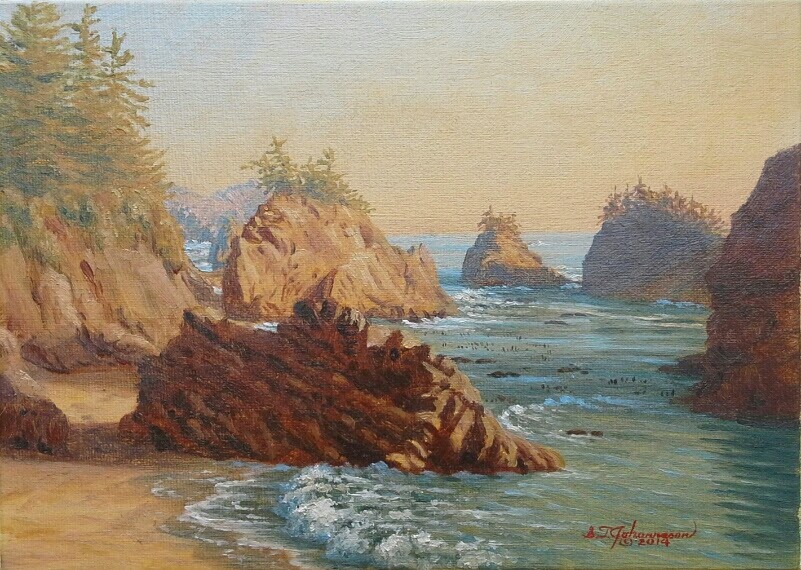 I am posting this even though it has been ...
SOLD


(Take Note: for those of you who have signed up to be notified by email of new postings to this blog, you have been receiving not just a notification, but an actual copy of the new blog posting as the email. As this does not show the images of the paintings in the best possible light, you should click on the title of the latest posting, to open up the actual blog itself, and to enlarge and enjoy the paintings at their best.)

According to the weather report the wind down on the coast was to continue for three or four days, so I stayed up in my camp on the forest roads of the Siskiyou National Forest. I decided to next work on a painting done from a Sepia wash drawing in one of my sketchbooks that I had drawn back in 2009. I remember the evening well; I had discovered aptly named Secret Cove that morning after seeing a photo of it in a brochure or guide book, and spent the day drawing there in my sketchbooks. I squeezed this one in at day's end, drawing until the light failed.

My desire was to capture the feel of that late afternoon light, and this turned out to be one of those minor milestone works that one becomes aware of during the course of a career; perhaps it may even turn out to be a major milestone from what I learned in painting it. Although two of the the recently posted sketches of the Bandon Coast were painted from pencil drawings done only a couple of days before the Oil sketches, the challenge for this Oil of Secret Cove was that it was to be done from a drawing from five years ago. To put this into perspective, one must be aware that my highly detailed Watercolour work has always been done in the studio using a number of photographs as reference, sometimes augmented with drawings. I only rarely worked from just drawings. But because these Oils are looser, and nowhere near the detail of the Watercolours, I have been pleasantly surprised at the results when working only from drawings. So the challenges were to paint from a five year old drawing, and to capture the feeling of that evening of years ago. Obviously the light was the essential thing and the usual imprimatura of Venetian Red would not suffice. I have been aware of Yellow Ochre as an imprimatura since I first dabbled in Oil as a wee lad, but had never had occasion to make use of it. Of course in Watercolour I underpaint in Yellow Ochre or Cadmium Yellow quite often, but Oil is a different medium. You inveterate painters in Oil and Plein Air people this will all be old hat, but for me this was new territory, and an example of what this Journey of discovery I'm on is partly about.

Thus I laid down the Yellow Ochre imprimatura, and blocked in the composition with Burnt Sienna, mixed with M. Graham's Walnut Alkyd Medium, in order to establish the underlying warmth necessary to capture the evening light. The rest of the pigments used were Blue Ridge Yellow Ochre, which is brighter than the Winsor & Newton, Italian Burnt Sienna, both by Rublev, Venetian Red, Cerulean, & Cobalt Blues, and Cremnitz White. I was not at all sure how well I could lay down the blue of the sky over the wet Yellow Ochre imprimatura without muddying the paint, but with a light touch and the bristle brush held at a very low angle to the surface it proved not to be a difficulty. The sea came next gradually changing from the light blue at the horizon to the greens in the foreground. Next came the distant headland and islands seen on the left, using Mixtures of Venetian Red and white, and Cobalt Blue and white; in the center of the horizon is seen House Rock and Barnacle Rock is a single dot just before it, as seen in the enlargement below.  Even here it is hard to see ... perservere. 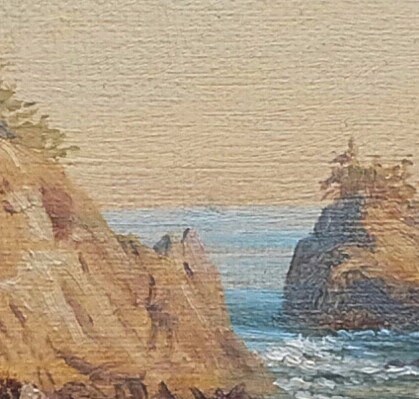 Now we come to the make or break decisions of this workb how to handle the colour of the three islands on the right. In my Sepia drawing simple washes quite effectively captured the atmospheric effect of the islands against the light, lost in the haze of evening. If my laptop was available I would scan the Sepia drawing to show you ... perhaps in a future post of this Journal. So how best to proceed? I mixed a quiet purple from Venetian Red and Cobalt Blue with some white, and judiciously applied it to the farthest of the three islands, as I had done with the sky. The effect was all I had hoped for, with the two complementaries (the Yellow Ochre and the quiet purple) heightening the glow of the evening light. By adjusting the thickness of the overlying purple mixture, I was also able to impart the glow of the intervening atmosphere between the viewer and the two farthest of these right hand islands. The righthandmost stack, being closer, glows with a warmer light, and the Burnt Sienna block-in is used to great effect here, and more so on the slightly closer stack in the center foreground. Small sables were used for some of the detail work, such as the distant headland and stacks on the left and the trees on the closer islands, but for the mostpart a #4 bristle bright (a short haired flat brush) was used. I learned much with this painting, and happily achieved what I was after; more knowledge gained, and another milestone passed!