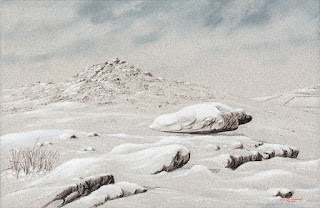 Still in Poldark Country, as we have been since the end of July, and with this work we are now on Bodmin Moor. This is also Jamaica Inn territory, which has been made into a film a number of times, my favorite being the one with Jane Seymour. Here we are looking north from the Logan Stone on Loudon Hill to the southern prow of Roughtor (pronounced Row, as in argument, -tore), the Second highest of the two Cornish mountains, the other being Brown Willey, out of view to the right (a mountain in England is a hill over a thousand feet). A logan stone is a balanced rock like that in the foreground; usually, if you can get on the thing, you can rock it with your weight alone. Between here and Roughtor, which is about a mile or so away, are to be found many bronze age hut circles, and remains of small field walls, like those to be found on Dartmoor to the east.

Thinking of Claude Lorrain again not only of his Liber Veritatis, but of the whole of his work, I give the following quote from CLAUDE LORRAIN: PAINTER AND ETCHER by George Grahame, writing at the end of the 19th century (this biography of Claude is found in the Delphi Classics series volumes on Artists):

“The eye gradually accustomed to the Claudian world, bewitched by its sunlight and its atmosphere, begins to dwell with pleasure on the ruins and the marble palaces, the wooded hillsides crowned with convenient towers, the meanderings of impossible rivers. You have but to surrender yourself to the charm of this unreal world to lose sight of its unreality and live in it as one lives in a dream. The artist gives us the “great key, To golden palaces, strange minstrelsy, Fountains grotesque, new trees, bespangled caves, Echoing grottos, full of tumbling waves And moonlight; ay, to all the mazy world Of silvery enchantment!” We are carried far away from this workaday world of ours into an ethereal domain whence all toil, distress, and terror have purposely been banished by the painter. The inhabitants of this ideal world are as gods. Its skies are all but cloudless. All the rough places in it are made smooth. Such is the Claudian landscape, the quintessence of reality distilled in the alembic of a poet’s soul. Surely only the sternest moralist will condemn its charm. When at last you close the book and turn from this world of Claude’s to nature, you feel for a moment like a man who steps from a concert-room, where he has been listening to the music of Beethoven and Mozart, into the din and glare of the street.”

Looking through the Liber Veritatis or a series of his paintings, we are entering a world that never was ... but I for one would like it to have been. Consider strolling about in a pastoral & mythical Arcadia á la Claude, happening upon, nymphs & dryads, the odd satyr, joining in with a dance of villagers and mythical demi-gods, hoisting a flagon of wine, or three, with Bacchus and his merry retinue, having a chat with the local river god on a golden afternoon, as he lugubriously takes his ease beside his cooling stream on a golden glowing afternoon. My preferred mythology, of course, is the dark and wild mythologies of my Norse forebears, and the Ring Cycle, but there is something to be said for taking a break, now and then, from Brynhilda's Hel-ride, the slaying of Grendel, or raiding the tomb of Angantyr the Berserker for the cursed sword Tyrfing, and repairing to the sunnier climes of the Arcadian southlands to kick back for awhile.

Nature story ... A Golden Mantled Ground Squirrel was nibbling on a strawberry remnant, when a chipmunk came up behind him and nipped the base of his tail, and ran off, chased by the ground squirrel; the ploy didn't work, however, as the ground squirrel got back to the strawberry first. "There are more things in heaven and earth, Horatio, than are dreamt of in your philosophy.”, as a little known Bard once said.
Posted by Not Quite a Painting a Day at 15:45