To the Grand Canyon via Sedona, Arizona.

Sorry for this six week silence, but libraries have been few and far between, or if present (not that I looked), inconvenient.  I have kept writing during this six week concentrated photo-recon journey through some of the greatest geologic wonders of the world, as the next several postings will attest.  I've also had (and still have) paperwork to do.  My phone also died on April 1st, of all days, and while it was not essential to my blog postings, catching up on a couple weeks or more of emails was a time consuming slog.  When it passed on, I had been catching up on the ten days of emails accrued while I was at the Grand Canyon, where, like at Show Low, I had neither cell nor data connection!  It lasted me 2 years and 4 months … the guy at Wal-Mart, on April 13th, said that was about right for a smart phone … is that true … anybody out there agree with that?  Since that was my first smart phone, I wouldn't know, but seems a little short to me.  He said old flick-phones lasted forever, as did my Tracfone, when I brought that up.  So, on to the first of my catch-up postings, from the public library at Springdale, Utah, just outside Zion National Park.

It was later than planned, by the time I got out of that Show Low library, after failing to post my last blog entry.  I realized I had no time to figure out what was going on with the library Wi-Fi, so I headed west on State Hwy 260.  The road proceeds through the Ponderosa Pines on top of the Mogollon Plateau before dropping off the Mogollon Rim after sixty miles, and even after descending a thousand or more feet the Ponderosa forests continue.  Just before the descent is the Mogollon Visitor Center on the south side of the highway.  Here one has great views off the Rim to the south; there is also a forest road along the Rim to the southeast where there are even more viewpoints.

Fourteen miles farther on I turned north onto forest road 64 for six miles, and just after entering forest road 198 I found my camp, for the night, with a view to the north of the Rim in the evening Sun.  About a half a mile before I found my campsite I surprised an animal in the road which proceeded to run down the road a ways before turning off into a ravine, much like the European Badger does.  Later, after much consultation with my Mammals book it was determined it was a White-nosed Coati; most likely a solitary male … another first! 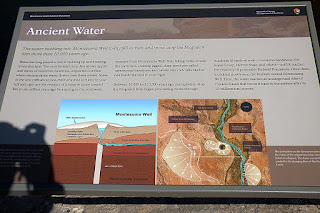 The next day I was easily able to post my blog at the Payson library, twenty-one miles from last night's camp, and then move on down the road.  Payson is still within the Ponderosa zone.  Staying on State Hwy 260, it was a long climb back up onto the Mogollon Rim, and about forty-two miles from Payson the highway leaves the Ponderosas and into the Juniper/Pinion zone, as it begins its descent towards Camp Verde twenty-three miles distant.  Even though here at a much higher altitude than Payson, surrounded by Pondie forests as it is, the forest here transitions to the Junipers and Pinions … I wonder why that is?

Well, I didn't want to camp in the Junipers and Pinions again, so I back-tracked three miles to forest road 9246R, and passing a camper near the highway I went on in another half mile and found a delightful campsite.  I took an evening stroll, a wide half circle through the forest, arriving back to camp in the opposite direction from which I had left.  A big Elk had passed through the area recently, according to the tracks; Coyotes were also heard howling off to the west, a quarter mile off, I reckoned.  I spotted Stellars Jays at this campsite; happy to know they are down here in Arizona as well; I like those black headed blue denizens … like sapphires of the western forests. In the morning, while breakfasting, there were other various birds passing by.  I recognized White-breasted Nuthatches.  There was a pair of birds that I could not find at all in my bird book, other than in the ‘visitors' section … a Clay-colored Robin, that normally lives in Mexico.  That is the second bird I have ID’d that has come north out of its normal range, according to my bird book, but since it is a couple decades old, I reckon global warming was less advanced when it was published. 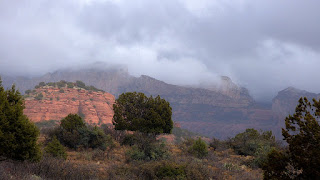 From this camp, which I hesitated to leave, I dropped off the Mogollon Rim, again, down to Camp Verde over three thousand feet below!  The low altitude (3200'), of the Verde Valley might explain the high altitude for transition between the Junipers/Pinions and the Ponderosas.  Since I was so close, I visited a cliff dwelling misnamed Montezuma Castle; Montezuma lived centuries afterwards and had nothing to do with this finely preserved antiquity.  The builders were a different culture from those at Chaco Canyon, Mesa Verde and Hovenweep.  These people had been in this area for a long time before they constructed this structure, c.1250-1400.  The Chacoans had abandoned theirs by this time, and moved east towards the Rio Grande Valley, not southwest to here.  Up until the sixties you could go through these structures, but now it can only viewed from below.  Evidently most of the rooms still retain their roofs/ceilings … that would be something to see.  Eight miles up the road is Montezuma Well, a limestone sink, fed by continuously flowing springs. 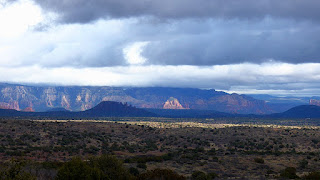 North through Sedona then west on State Hwy 89A, a few miles, to forest road 525, which I turned onto, ending up proceeding north ten miles, finally finding a campsite on forest road 525C.  There were a lot of other campers closer to the highway, and others deeper in, and I passed a couple of possible, but I’m happy to have continued on, for I found great views, a level spot, and no neighbors.  I have heard about the red rocks of Sedona, but the reality is quite astonishing, even after the wonders of the Moab area of Arches and Canyonlands.  The town of Sedona is plunked down in the middle of all this, and a cursory glance as I headed through to find a campsite 15 miles along, is of a similarity in affluence to Aspen, CO.  I'd like to spend time in this landscape, but this time will have to be scout only.


I managed supper about dark, in spite of the wind.  In the morning it was warm enough for only a sweater, but by mid-morning the rain and sleet showers began to roll through, and more layers were needed. I stayed put all day, writing this post and continuously jumping out to take photos with the ever changing light and showers varying the landscape every few minutes … in out, in out, in out!  Sometimes these are the best days in spite of chill winds and showers.  Late in the afternoon a flock of Western Bluebirds came through, and I was able to get a couple of photos, albeit through the glass of the side window of the truck.  Towards the end of the day the showers desisted, but the lighting effects continued until sundown … more photo ops.  I’m of two minds about Sedona … while the landscape is stunning, so many of the great views have a bloody town in the middle of it!  Perhaps if I were to spend more time here, I would find views without the bloody town.  But there is snow coming to the Grand Canyon and I want to be there for it.

So, up through Flagstaff, and twenty-six miles beyond it, found my campsite for the night in a grove of Pondies, a half mile in on forest road 523, with a view of Kendrick Peak.  Windy all night, but before turning in I had a great view over the meadows of Venus and Mercury setting in the west; definitely the best apparition of Mercury I’ve ever experienced.
Posted by Not Quite a Painting a Day at 15:38