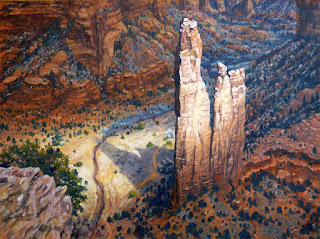 
(Take Note: for those of you who have signed up to be notified by email of new postings to this blog, you have been receiving not just a notification, but an actual copy of the new blog posting as the email.  As this does not show the images of the paintings in the best possible light, you should click on the title of the latest blog posting at the top of the post, and not the title of the painting itself; this will open up the actual blog itself, and you may then enjoy the paintings at their best.)

This is one of those paintings that took over and dictated what needed to be done.  For example, I needed to give a real sense of scale to this 800 foot high monolith of stone, and so a certain amount of detail was needed.  The miniscule trees on the canyon floor and lower slopes were essential in doing this.  I couldn’t have done this in a looser painting, thus it took considerably longer than planned and this is reflected in the price.  Still, I would point out that this is not a detailed painting when set against my Watercolours; you will need to go to my Website to see examples of those (www.StevenThorJohanneson.com). 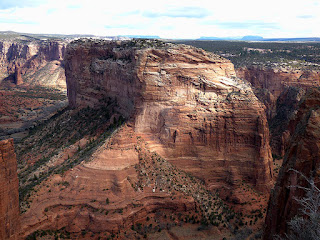 I think Spider Rock is the signature piece de resistance of Canyon de Chelly.  It is at the far end of the south rim drive, and when doing that rim, I had driven the north rim first, I went straight there and then worked my way back along the viewpoints, so that I was heading for the campground all afternoon.  When I arrived at Spider Rock trailhead, I did not know what I was to be looking for, but when it comes into view, you know what you have come to see … a free-standing twin spire of rock, 800 feet high, at the junction of a couple of branches of the canyon.  I arrived just as a shaft of sunlight was hitting the upper reaches of it and casting its shadow on the canyon floor, while the surrounding landscape was still in cloud-shadow!  “Oh,” I said, “that’s what I’ve come to see!” 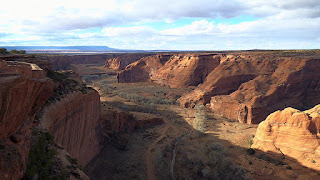 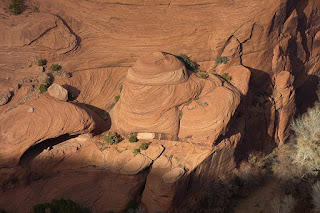 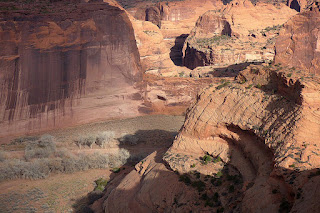 The only trail down into the canyon the public is allowed to take, without the necessity of a Navajo guide, is that to the White House, so named for its almost complete white plaster still in existence.  I took this trail on Friday, my second day at the Canyon.  It was supposed to be a clear day, but there was high hazy cloud, which made for low contrast lighting, but it was still worth the hike down and back in spite of the eight switchbacks on the trail.  There were two Navajo boys who, climbed up the sharp sandstone inclines, thus cutting off the switchbacks.  From below it looked almost impossible, but when I later made my ascent I could see that the angles of ascent were not as imposing as they had appeared from below.  Still, it would be an ascent for a much younger self, and with ‘grippy’ footwear.  I had lunch halfway back up, and watched a couple of crazy chipmunks running up and down the canyon walls.  Here I met a Navajo Park Ranger, who, like me, had been a cross country runner in his youth, but he had trained by running up and down this very trail!  I would have feared running against him back in the day. 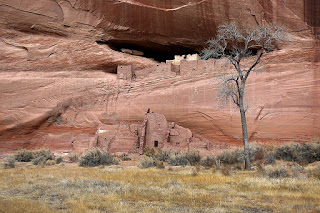 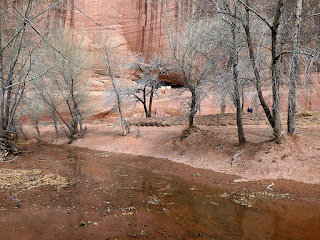 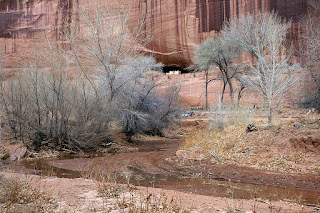