Here is another painting I did last Winter in England. 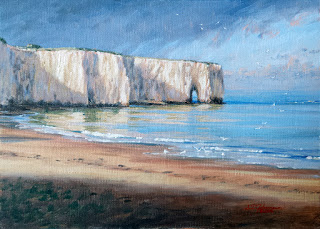 On through Dinosaur, turning south through Rangely, both of whose lights I had been seeing of an evening for the past four nights, and on through Grand Junction, to Hwy 141 and Unaweep Canyon a few miles beyond.  Well, not exactly quickly through Grand Junction, for I had ascertained before leaving my clifftop camp above Dinosaur that if I got to Grand Junction by 13:30, I could catch a showing of “Bladerunner 2049.”  And so I did.  It is not as revolutionary a Sci-Fi film as the first one all those years ago, but it creditably continues our look at the Bladerunner universe.  I will say this that it is a long film, but I sat through the whole thing without a fidget, and was surprised at the time when I looked at my watch as the credits rolled (I did not  know its length when I sat down).  The first film is still one of the few true Sci-Fi films that there are, ‘Alien’ and ‘The Terminator’ being another two.  Horror and Fantasy get lumped in with the genre, but they shouldn’t be; they are their own entities.


After the film and a bit of resupplying, it was getting on towards sundown by the time I got twenty some miles into Unaweep Canyon, so I took the next forest road on the left (Divide Road), and as I did so I saw a truck on a ledge high above me … good grief, I thought, I’ve got to go way up there!  It was not a difficult drive, as it turned out, but a bit wash-boardie here and there, and the views from the ledge were spectacular … when I could take my eyes off the road to take a look.  And there was an inordinate amount of traffic coming down off the Uncompahgre Plateau.  Twenty eight vehicles passed me going down by the time I got into the National Forest and a campsite amongst the Ponderosas.  Normally I would have encountered two or three, or even none.  Upon nearing my eventual campsite, I spotted a sign in the dusk, informing all that there was a controlled burn in progress.  After I settled into camp, more vehicles passed by on the road, most heading out, and a very few heading in.  There was a bit of smoke in the air, but since most of the vehicles were leaving, I figured the controlled burn must have burned down. 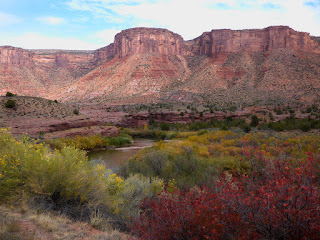 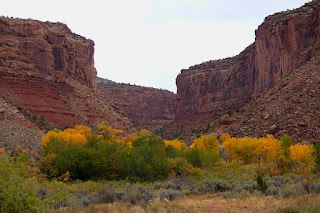 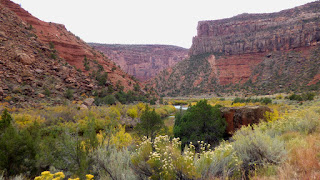 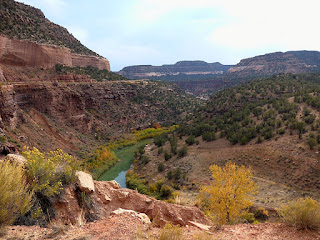 The next day it took me six hours to make the hundred or so miles through Unaweep Canyon, and along the Delores River Canyon beyond the community of Gateway, as the photo-ops seemed to present themselves every few yards; red canyon walls contrasted with the green of the Junipers & Sage!  I hope I got some good shots as it was a mostly overcast day, although with some sunbreaks.  Once past Norwood, I thought I would find an early campsite, but I ended up on this interminable gravel road, with small ranches wall to wall and no public land for 17 miles, dropping down into and climbing out of two deep canyons along the way, before I found a campsite inside the National Forest on the northern slopes of Lone Cone, the westernmost mountain of the Colorado Rockies.  I was in a forest of dead Aspens, or so it seemed, since there was not one golden autumn leaf on any tree that I could see.  The Aspens had been in their prime when I left Grand Teton National Park, several degrees of latitude north, but down here in southern Colorado they had already turned and been blown off!  In 2013, at almost exactly this same time of the year, the Aspens had been in their prime, when I passed through not so far from where I now was.  At least the Cottonwoods had been stunning during this days drive … so to hell with the Colorado Aspens.

The next day I refused to retrace my route along that gravel road, but took a different one north to the Highway, east of Norwood.  Here I did overlap the previous afternoon’s route, for 5 miles or so, but I was on blacktop.  I breakfasted in the campground I should have stopped at, but I had assumed it would have a charge, but I discovered too late that it did not.  Chalk it up for future reference.  I arrived in Telluride about 11:30, just to see the town, not knowing anything about it.  It has a really beautiful setting near the head of a canyon, with stunning peaks all around.  The town itself seems really laid back, almost hippie-esque, much more accessible than Aspen appeared to be.  I asked about how the snow compared to Aspen or Vail, and was told there was little difference, but that the ski runs were much steeper.  Another native said that it appealed to 20 year ski bums who liked to point their skis downhill and hang on for dear life.  I think if I had been able to afford to take up skiing when young Telluride would have appealed to me, but I went to England and an art career instead.  Telluride, so I have been told was the site of Butch Cassidy’s first bank robbery … that boy got around … I’ve been running into him all over since I headed up for the Eclipse.


Hwy 145 from Telluride to Cortez and Mesa Verde is one of the great mountain drives, and if you have ever drunk a can of Coors, you will recognize one of the views.  And here at Mesa Verde National Park I finally have been able to dispense with my long-johns for the first time since September 15th!  It is chill at night, and there has been a vicious wind building up during the days, but it is warmer than northern Wyoming.