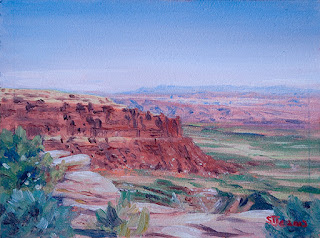 Mesa Verde National Park is one of the most interesting of the National Parks, primarily since it is the only one of the Parks that was made a Park for its human landscape, rather than for its natural beauty, which it undoubtedly has, but not unique enough to set it apart.  It is also an Unesco World Heritage Site.  The archeology of the Park ranges from the excavated 1500 year old pit houses of the Basket Weaver culture, to the 700 year old stone architecture of the Anasazi Cliff Dwellings.  And Europeans say we don’t have anything old in this country!  And these marvelous ruins were constructed by the ancestors of the Native American Pueblo People of New Mexico and Arizona.

The following photos are of Balcony House which I toured with a group guided by a Ranger.  Later there are a few more photos of Spruce Tree House and Cliff Palace … I have limited it to these, although I took many more, but this should give you an idea of the wonders found at Mesa Verde.

Their mastery of their environment is put into perspective when you consider that at the height of their culture there were more people living in this Four Corners area than are living in the area today; and better than the average European of the time (and I’m talking of the average European, not the pampered elite in their castles).  It is astonishing to think that out of this dry and seemingly forbidding landscape, they were able to produce enough corn, beans and squash, to have 4 or 5 years worth of supplies in their store houses at any one time, so as to weather the drought years, that would invariably occur.  A corn, beans and squash diet is nutritious enough to live very well, and when you factor in the other wild foods available, such as berries, pine nuts, game animals etc., as well as the domesticated turkey, life was pretty good. 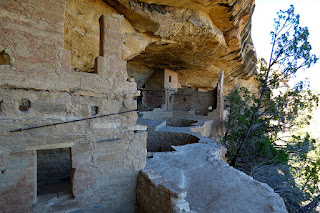 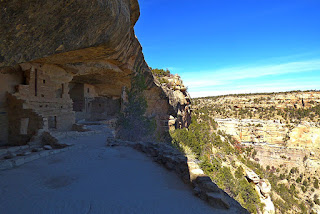 However, it was probably a 50 year drought that caused the abandonment of the area in the end.  A fifty year drought is no easy thing to overcome.  But they had a good agricultural run for seven or eight hundred years, from the Basket Weavers and their pit houses, through the above ground Pueblos, and finally to the sophisticated stone constructions of the Cliff Dwellers of the twelve hundreds.  By 1300 AD, they had pretty much all moved on towards the southeast and southwest to modern day New Mexico and Arizona, where their descendants live today.  These ruins were never lost nor forgotten, and survived in the memories of their Pueblo Peoples descendants.  This is the second time I have been here; two days in 2013, and four days this time. 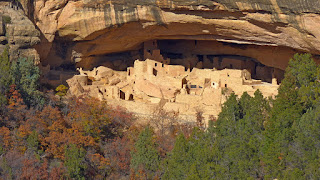 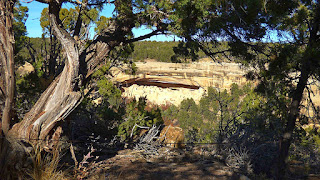 I camped about half of a mile off Hwy 141 north of Egnar just before the highway starts the long winding descent down Slick Rock Hill, in amongst the Junipers and Pinyon Pines on BLM land.  About 19:45 (timing not accurate), I spotted a bolide meteor, that flashed downwards at a slight angle from east to west through the teapot section of Sagittarius. It was a flickering descent ending in an orange red flash.  About ten minutes later I saw a trail paralleling the path of the bolide, reflected in the crescent moonlight.  I got out my binoculars and confirmed what I was seeing.  It was not unlike a jet contrail, but there were no others in the sky in that direction, even though there were planes passing through the night, and none were leaving trails.  The meteor’s train lasted another 10 or 15 minutes, gradually drifting towards the southeast.  This is the first time I have seen a meteor’s train, although I have been aware of the phenomena.  This is more of an ascetic observation than scientific as my timings and exact location against the background stars is approximate.  The orange red colour I have not seen in a meteor before.

Pigments used in the painting were, Imprimatura: W&N Venetian Red;

Rublev: Blue Ridge Yellow Ochre, Italian Burnt Sienna.
Posted by Not Quite a Painting a Day at 17:44