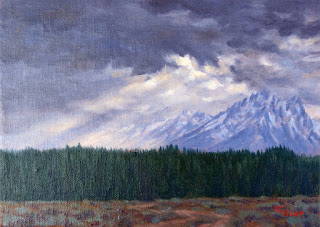 I have addressed this subject before, about the differences between studies, sketches and paintings, and this is a good example of an Oil Study.  The intent of this work was to study the stormy cloudscape and snow showers sweeping over the Tetons in the afternoon light.  This I did.  I could have left out the foreground forest and sagebrush meadow, as the subject of the study was complete with the painting of the sky and mountains, and the middle distance trees and foreground sagebrush meadow were incidental to the main study.  Be that as it may, I quickly dabbed in the trees and sagebrush, and it could now be termed a sketch, but for me it remains a study, for studying the sky was the intent.

Some final shots in the Grand Tetons National Park.

Well … I finally made it out of the Big Tits Grand Tetons National Park, and wended my way north the few miles to Yellowstone National Park.  Just before you enter the Park through the south entrance the  Snake River is crossed, and here I stopped for a few photo-ops and was rewarded with the sighting of an Otter.  I got a few shots, but he/she being very aware of me kept his/her very wary distance. That was my last good luck of the day, which had started out cloudless & beautiful, but began to cloud over as I entered the Park.   Here at the south entrance, I asked if any of the campgrounds had closed yet, to which the ranger replied that most of them had and directed me to a large sign telling which ones were still open.  Of course if they were full up, I would have to leave the Park overnight, I was informed … Yellowstone sucks.

After working out the four open campgrounds and where they were I steamed along to my assignation with Old Faithful.  I had seen the geyser as a teenager and was looking forward to seeing it again.  Evidently the old bugger was spouting off as I was parking, and so had a roughly 90 minute wait, according to an old Aussie who had just missed it himself.  He was on a coach tour with his wife and had never to England … must have been the only Australian of his generation not to have done so!  While awaiting we also met a solo musician from Las Vegas who had just done a gig at Teton Mountain Lodge up on top of a mountain that I could see from my previous campsites.  Lucky swine had been in the two National Parks for two days and already seen two Black Birds Bears, while I had been in Grizzly country for almost seven weeks and seen neither Grizz nor Black Bears!  Meanwhile the partly cloudy skies deteriorated while we awaited the event.  We glanced to the north and saw a wall of snow swooping past west to east.  I was about to take photos when we were hit as well.  Almost losing my hat to the wind I and the expectant crowd retreated to the visitors center, where I stood outside beneath a side porch, and continued my vigil.  Well … I suppose Old Faithful blowing off in  blizzard is an interesting sight, but at my distance it was hard to really tell when it was spouting.  Photos were taken, but I could not risk my camera out in those elements, even if I were clad in rain gear, thus my vantage beneath the porch roof.  Yellowstone sucks.

After that it was driving off through the snow showers to the ‘Grand Canyon of the Yellowstone,’ taking in Prismatic Pool on the way.  I was eager to see the Lower Falls, that I was familiar with through the paintings of various artists, but especially those of Thomas Moran.  Even with the overcast it is impressive, so much so that I returned the next afternoon, with a clear sky, to get even better shots.


On the way to the Canyon, I had checked out the Madison Campground.  It was awful … no space between campsites … a true campground suburbia!!!  I now headed for the primitive Slough Campground in the northeast sector of the Park.  It was full even though it was at the end of a five mile dirt road … Yellowstone sucks.

I drove back down the road and stopped in a lay-by half a mile from the highway to heat up my breakfast water, and heat up some soup for supper, and think about my options.  I was tired.  I had followed caravans of people to the various sites and at the various sites … and this is slow season!  Removing myself from the Park was not part of my petrol budget.   I shudder about the Summer here … Yellowstone sucks.

While heating my water  I kept surveying the surrounding landscape with my headlamp on red ... I am in Grizzly country after all, and in the middle of heating my first kettle, sure enough there was a pair of eyes reflecting off in the dark!  I quickly turned my headlamp from red to white and then to full beam.  Now the eyes glowed silver, but we're too far away to see what  they belonged to.  I drew my bear spray, removing the safety.  The eyes were moving ... and coming towards my position, but at an angle.  Too low to the ground and too close together to be a bear, I reckoned.  Could be a Mountain Lion, but I figured it was too bouncy ... more likely a Coyote or a Wolf.  Wolves don't bother me ... I've camped with them nearby with my brother Doug up in the Minnesota Boundary Waters Canoe Area Wilderness.  If a Coyote, should be no problem either, unless rabid.  I finger ed the trigger og my cannister of spray.  They came on more straightforward, and the Coyote materialized on the edge of the lay-by 15 or 20 feet away.  It circled around the perimeter. Of the lay-by 180°, pausing occasionally trying to get a handle on what I was, but of course it was blinded by my bright beam of light.  I had been talking to it ever since I identified it as a Coyote, putting on my British Lobby's voice of authority,  "Move along now ... no nothing to see here ... there's a. Good laddie, now ... move along."  And so by and by Mr. Coyote did just that.  I noticed he was a bit scruffy, unlike the magnificent Coyotes out in the Hart Mountain National Antelope Refuge in Oregon, of three years ago ... those were all bushy and in top condition by the look of them.  After this Coyote had moved along,  I debated whether I should go ahead and heat up my chunky soup ... I decided to do so, without incident.  This really was the highlight of a suckie day.

After supper I headed down the highway, thinking I would pull into some layby and get a few hours dozing in the driver’s seat, but I found a side road with a place to pull into the trees about a quarter mile from the highway.  It was about 23:00 by this time so I decided to crawl into my sleeping bags.  I did not expect to see any Rangers out looking for errant sleepers, especially at this time of the year.  I was right, but I would not do this in the height of the season.  And so well rested I awoke to a new day and headed for the Mammoth Hot Springs, with a couple of stops on the way.  The hot springs are quite impressive, but you have to realize that only some of the various springs in the complex are active at any one time.  Those that are active are quite beautiful, but those that are no longer active can be quit drab as the travertine deposits crumble away, but even those are impressive memorials of their former selves.


As the day progressed the overcast of morning became partially cloudy to clear during the afternoon, and by the time I retraced my steps to the Lower Falls of the Yellowstone, the lighting was magical in the Canyon.  Then on to the Artists Paint Pots and Gibbon Falls before egressing from the West Exit of Yellowstone; I also enjoyed seeing the steam rising out of an otherwise normal forest mountain landscape … a bit surreal.  That night I dispersed camped six miles west of Yellowstone.


Yellowstone sucks mainly because of its popularity, and so, as stated, you find yourself following small crowds (at this time of the year), from wonder to wonder.  I expected that although I had lived in hope, but the main problem is that it is difficult to experience this Park on an extreme budget as I must do.  This is partly because of the size of the Park so it is not conducive to leave it at night and disperse camp in the surrounding National Forests.  The larger campgrounds are a suburbia nightmare, and the one small out of the way CG filled too early.  I think if those smaller campgrounds that had closed were still able to be used as just non fee overnight stops, as many National Forest campgrounds seem to be, that would be a help.

Now that I have experienced the suckie things about Yellowstone, I can form a strategy for next time, should there be one.  Come early or late in the season, as now, disperse camp just outside and enter early in the morning, so as to make a day of it.  Choose your wonders to see in advance and go to them, but be open to serendipity as always.  Shoot through in a day or two, using the Park as a way to get somewhere else, such as the Grand Tetons National Park.  Of course if I was younger and fitter there is the whole back country for backpacking and camping.  Yellowstone does have a surfeit of wonders to experience, and rightly so, and thus in spite of feeling like you are at a ‘natural funfair’ & following the crowds hither & thither … Yellowstone sucks … and yet Yellowstone does not suck!
Posted by Not Quite a Painting a Day at 21:59