[Sorry about the delay in posting this, but I’ve had my annual accounts to do … you understand.]

After filling my tank and spare containers with petrol at Klamath Falls the night before, the next morning, Monday, found a dusting of snow, about quarter of an inch, at my chosen campsite, and the air was crisp and the semi frozen ground crunched beneath my boots as I prepared to brake camp and enjoy my first full day in the High Desert landscape.  I had not gone far from where I had camped and keeping an eye out, as always, for future and better camping possibilities, when the beginnings of a lovely duff covered forest road beckoned off the larger forest road I was already on; so I took it.  About 200 yards in the Ponderosa Pines gave way to an open area known as a flat, in these parts.  I thought about turning around at this point, but the ground off road appeared a bit soft, and since I was more or less committed I proceeded in the shallow ruts the duff covered road had turned into out on the flat, intending to turn around in the far trees half a mile distant, when the road no doubt would resume its duff covered existence.

Two thirds of the way across some large boulders were evident a short way ahead, and I didn’t think I could safely negotiate them without my petrol laden trailer-hitch platform catching up on them; without that I might have judiciously picked my way over them.  I halted, intent on turning around and retracing my path; transmission into reverse; the wheels began to spin; immediately stepped off the gas pedal.  I got out to inspect the situation, and remembering four years earlier getting stuck in fine volcanic ash up near Crater Lake, I thought … Great! An hour and a half gathering branches and digging out.  Oh were that true!

Two hours later and after digging out around each tire, and with numerous branches and dead sagebrush in place, the moment of truth had come; the tires still only spun; I refrained from spinning and digging in deeper, since that is a fool’s errand, but immediately ceased, and thought through my next moves very carefully.  I was 60 miles from Nowhere in one direction and 80 miles from Almost There in the other; I was on a forest road off of a forest road and not likely to see any vehicle, possibly until next Summer, and if I did they would be on their way to being captured by the mud as well, and if not, getting pulled out could be costly; I got into this myself and I would damned well get out of it myself.  Forty years ago in the Scottish Highlands, I found myself on the backside of Bienn Eighe and Liathach trekking 20 miles to Craig Youth Hostel, on the coast and opposite the north wing of the Isle of Skye, humping a 70 pound pack since I had just resupplied in Kinlochewe the previous evening.  There were no trails evident on the map and I found the landscape was boulder moraine;  it was up a boulder, step to the next, and the next, down in between, and up onto another, or over, and so on, and so on; it took me 8¾ hours to go the 12 miles it turned out to be, and once out of the boulder field and over a low pass only 2½ hours for the final 8 miles, although t’was into a driving rain by the time the youth hostel appeared.  I had decided, once I got stuck into the moraine, that if I broke a leg, I would crawl out to the road on Upper Loch Torridon through a pass to the south; that test I did not have to take, as the exam I did pass was sufficient enough.  There have been similar testings before and since then, and this would be yet another.

So after getting my mind right, I replaced some of the vegetation I had emplaced with thin flat rocks I had gathered, shoving them before and aft of each tire, building up a 2-foot trackway in front of each tire, and placing larger rocks at the end of each trackway to avoid driving off the end; 4 hours after my initial miring, I put the SUV into 4-wheel drive and into low gear, and pulled forwards out of the muck onto my rock trackway 9 full inches;  I was out of the sucking mud on narrow rock platforms of my construction.  The worst part of it had been digging out the sucking mud deep enough to place the initial sage and branches … it felt like I was on the Eastern Front, advancing on Stalingrad!  By day’s end I had filled in the ruts from my front tires to my rear tires and a little bit of roadway behind those.  By this time it was 18:30 and had been dark for an hour and a half, although there was an intermittent waxing gibbous moon poking out from the clouds, and I had worn my headlamp, while searching out and prying up the right rocks from the sucking clay out on the surrounding flat.  Eight hours had been put in and I called it a day. 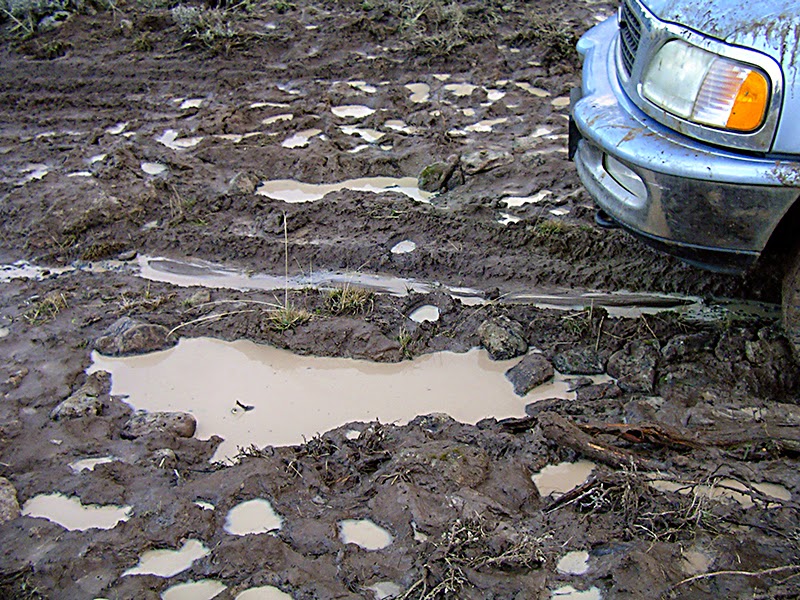 This shows my position at 16:00 on the second day; I took no photos on the first day.  The two larger puddles are where the front tires were on the first day; they also mask the two foot trackway in front of them that I first constructed to pull forward onto to get me out of the mud itself and onto something solid, after my initial effort with the branches had failed.  Although it was lower there in those front puddles, once I was forward out of the mud, and on the newly built trackway, I was relatively safe, but since I did worry about it that first night, once I had built enough behind me I reversed those few feet to the position seen in these photos, and felt better about it during the construction that followed.   All the smaller puddles are my footprints. 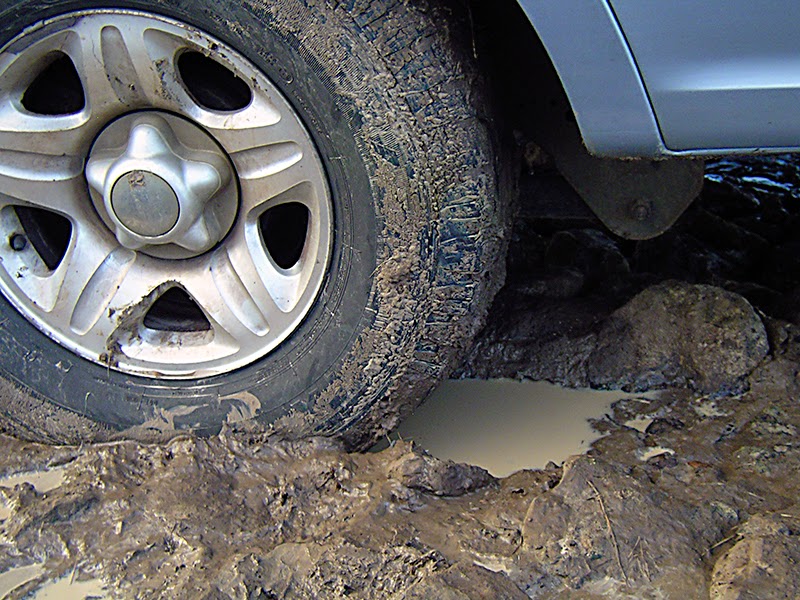 Close up of the driver’s side front tire.  The little puddle behind it is nothing … just a lower spot in my road construction, and is masking flat rocks only a half inch or less beneath the surface.

I managed to heat breakfast water for my thermos, but was too tired to cook supper, so I had raw carrots and broccoli, herbal crackers and peanut butter, almonds, peanuts and some mandarin orange slices from a jar, with herbal tea to wash it all down … not exciting, but enough to sate my appetite.
Posted by Not Quite a Painting a Day at 18:00