The day dawned cloudy, but with the sun breaking through occasionally, and so I broke camp and headed up the mountain to Crater Lake.  Although there was low cloud spilling over the rim, the surface of the lake itself could be seen  and much of the circumference was visible much of the time.  A snowy and different world than my recent campsite 17 miles down the mountain.  Being on the weekend there were visitors, many snowshoeing or skiing off along the crater rim, but I saw none heading with intent on the 33 mile circumference of the lake, as I saw no one packing the necessary camping equipment for such a trek, but that is not to say that there weren’t intrepid souls already out there … I expect there were.  I’ve considered it myself, and perhaps that may happen, before decrepitude sets in.

From the Visitors Center near the Lodge, I strolled left (West) along the rim taking photographs, and thinking about Snow Painting here at some future time; maybe when I Winter Camp here, but not today, as I’m intent on spending time in the High Desert on this journey.  But today was beautiful with another accumulation of fresh snow since my brief scout of two days before, and being able to see across the 5 mile expanse of the Lake.  Even with the cloud cover, there were enough sunlight and cloud breaks to give an indication of the wonderful deep blue of the water, the deepest and cleanest in North America.  On a clear day in High Summer, the blue is so luscious you just want to spoon it out and eat it! 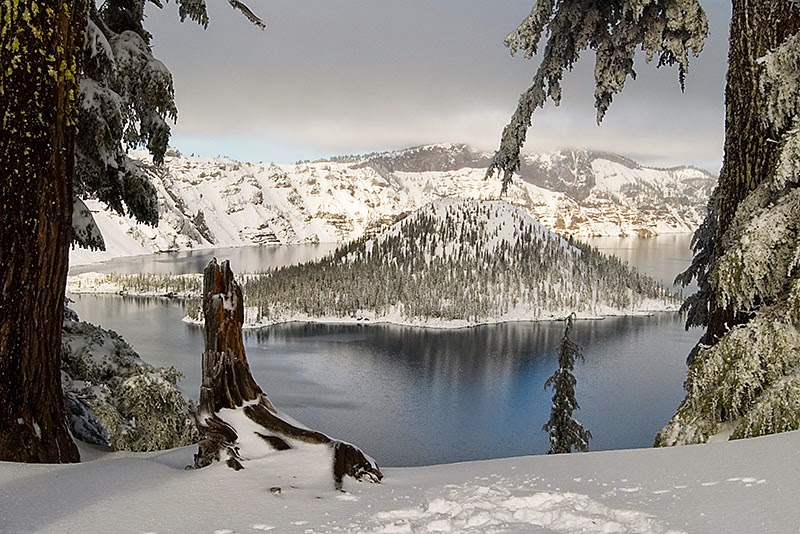 
Wizard Island, so named for its resemblance to a wizard’s hat, is a volcanic cone that arose some years after the massive explosion that collapsed the peak of  Mount Mazama, some 7700 years ago, and thus forming the crater you see today.  What would it have been like to have been witness to such an event, as did forbears of Native Americans whose stories have come down to us over the expanse of years since? 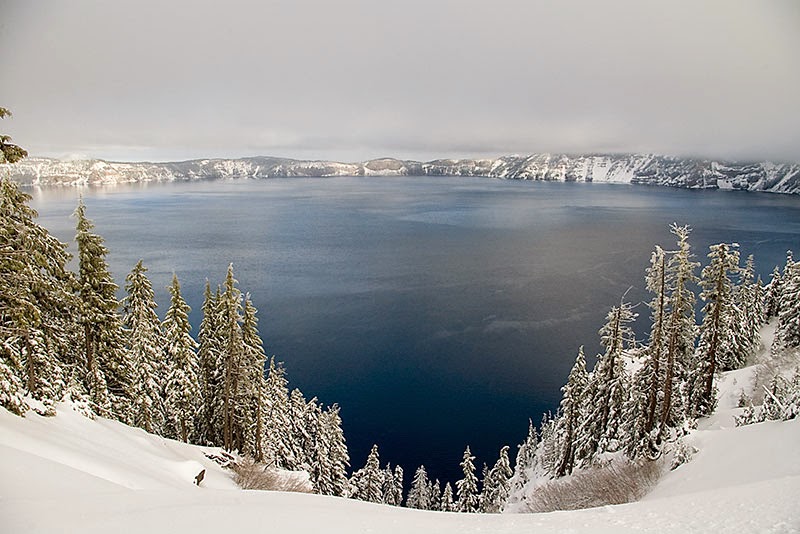 The Bowl of Crater Lake

This photograph begins to give one a sense of the crater itself.  The rim stands between 700 and a thousand feet above the Lake’s surface, and is 5 miles across.  But I had miles to go before I could sleep, and I had to fill my three spare containers with 15 gallons of extra petrol, before heading out to the into the High Desert, and so in the late afternoon, east down the mountain I went, obtained the petrol, and refreshed some other supplies in Klamath Falls, then steamed sedately off into the Oregon night to a forest clearing I know about.  It’s nice to be building up a knowledge-base of forest road campsites, so that one can arrive at them after the night has fallen; in territory I have not been in before, I need to first discover them in daylight, but thereafter, anytime night or day will suffice as they are then a known quantity.  I found the intended site with no difficulty, settling in for the night, even though it had been two years since I had last been there, and only the once … and there was a hint of snow in the air.
Posted by Not Quite a Painting a Day at 19:30