Springtime on the McKenzie. 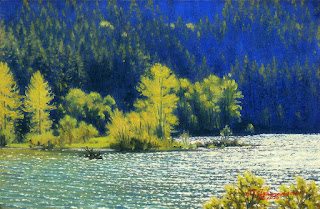 Last year on my first night camped in the clearing, where the aspen fell in the grove, I was about to climb into my sleeping bags in the back of the SUV, when I saw these red eyes reflecting back at me ... I use a red headlamp. It's always disconcerting when this happens, until I switch to the green or white colour on the lamp, and identify the bearer of the eyes. A month ago, after finishing a lengthy phone call with my brother, I stepped out of the truck, only to be confronted with a dozen pairs of eyes looking in my direction ... t'was a herd of deer. And that's what it was this time ... a single doe. It did not run off, and continued grazing about twenty feet from me. Very nonchalant. Only twice has it been anything other than a deer, and that was the coyote in Yellowstone, which I spotted from a distance, and identified as it loped closer, and the other was a rabbit in Colorado midnight snacking, spotted as I turned in. The coyote was curious, but never came closer than 15', since it was blinded by the white beam of my light, and I was telling it to “move along ... nothing to see here.” Eventually, off it ambled, and I risked heating up my soup. I digress.

Last year's doe became a bit of a fixture, in that clearing. She appeared just about every day, sometimes more than once. Often she grazed within a few feet of me, as I painted, occasionally within five feet. She always kept a weather eye on me, but I would make no sudden moves, and talked quietly to her as she grazed. She had two Bambis, I believe, but I only saw two, in the deepening dusk, twice. One of the young, or maybe both of them, but singly, came into the clearing with the doe, three or four times, during the day, but never close, and pretty much kept to the edges. I did get photos of her, but not the little ones.

When I camped in the clearing for a day or two in October, she was not there, but when I moved from there over to Spencer Creek, there was a doe with two fawns that came by every evening. One evening as I sat eating supper in the gloaming, the doe came to within five feet of me, and stared at me for the longest time, before sauntering off. I believe she was the same deer who had been at the other camp, although I cannot prove it. Her attitude towards me, and her with two fawns, and the fact we were only two or three miles from my other camp (the one with the aspens), gives me a certain confidence, that she was one and the same. I will be curious to see if she turns up again, if I camp at either this year.

A couple years ago, at the end of my year long Minnesota to Oregon journey through the Southwest, I passed down the canyons and valleys of the McKenzie River in the Oregon Cascades. On one of the broader stretches of the lower river, there were several deciduous trees, brightly lit and standing in high relief against the shadowed, evergreen slopes of the mountains beyond. They positively glowed. The Sun reflected blindingly off the water. Photos were taken.

When I came to paint this small work, I had some Genuine Ultramarine  (Lapis Lazuli), on my palette, and I began blocking in the shadowed mountains with it. I liked how it was looking so I continued with it, using W&N Ultramarine Deep very sparingly for some darker areas and mixtures. I felt like the painters of old, who had Lapis and Azurite as their only blues. Lapis Lazuli was worth more than gold then.