Our Mom Laid to Rest

Wednesday, June 28, 2017; leaving the Twin Cities,
through Alcester, South Dakota & on to Nebraska.

Back on October 15, 2015 (here), I wrote a tribute to my Mother who had passed away some five weeks earlier, just five days short of her 91st birthday; the last paragraph from that posting is reproduced here:

I could go on, but I think you get the picture.  Her life was full, and busy and full of memories … she was busy in her church activities (she was getting ready to go to one of her church groups, when she had her fainting spell) … and she still drove her own car (I was not nervous as her passenger two years ago) … and we had (and have) our memories at her Memorial.  And sometime in the Spring or early Summer we will go to the little cemetery on the gentle slope in the northwest part of the little prairie town of Alcester, and place her ashes beside her parents, and listen to the breeze rustling through the prairie grasses, and to the songs of the prairie birds as they welcome one who has been long away.

It wasn’t until this last Spring that we four Siblings, myself, Jill, Jan & Doug were able to get together to lay her ashes to rest beside her parents, in the little cemetery in Alcester, South Dakota; a village that hasn’t really changed much in size since she was born there all those years ago.  The gentle slopes upon which she and our Grandparents lie, are bathed in agrarian tranquility, and it took little to imagine her watching us, at age eight or so as she was when she left this tranquil prairie community, and perhaps skipping about when watching us became too uninteresting.  And as I foresaw in that quoted paragraph above, there was a rustling breeze that came and went through the prairie grass, and the songs of prairie birds were carried gently on it then, just as there were when I stopped by at Sundown on the 28th of June, the day I began my westward journey back towards Oregon.

On the last days of March her memorial stone was not yet ready, and by now it had been emplaced, and so on an incomparably blue-sky day, I headed southwest from the Twin Cities, and once on Hwy 169 out in the suburbs, I never touched an Interstate.  I crossed one at Worthington, MN, but headed south into the NW corner of Iowa, passing within a few hundred yards the highest point in Iowa (at about 1670’), and within a short time passed into southeastern South Dakota, on the county roads.  All through southwestern Minnesota, through Iowa, and on to Alcester, I was struck by the fresh greens of early Summer, before they become the heavy greens of a few weeks hence. 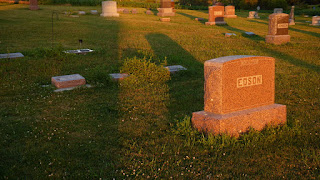 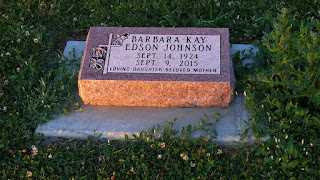 I arrived about twenty minutes before Sunset, passing the local baseball game being played as I approached the tranquil hallowed ground.  There was a man tending to stray weeds, and upon approaching the Edson plot, he came over and offered to see to those wild weeds that were there.  My time being short, and preferring not to have cut off stems to look at, I demurred and thanked him for his consideration.  He would tend to them after I had left.  Quiet moments were passed with a younger Mom skipping about the gravestones, and a young-woman Mom standing by her Mother’s headstone, and a Mom in her late twenties when I was young and we lived in the forests of northern Wisconsin … the happiest time of her life, she told me more than once … and other ages of Mom all gathering there … as the Sun set and the evening came on with dusky fingers from the east.  A warm evening, and tranquil, as I bid farewell, waving to the weed puller & passing the now floodlit baseball diamond … perhaps the many ages of Mom would go and watch the local team … on through Alcester, heading south a dozen or so miles, and then west towards the town of Vermillion, SD.  As I headed west through the gloaming a flash along the roadside; first one, then another, then many in the fields and meadows and groves … fireflies, as I had not seen them since I was a child!  They were with me all along my route through Vermillion, and on south from there six miles, crossing the Missouri River bridge into Nebraska and my campsite on the river, just a half a mile from the bridge at Mulberry Bend National Wildlife Area, where a deer greeted me upon arrival, and the fireflies flashed away as I prepared for sleep, the only person at this site … a magical end to a lovely day.