On the Outlaw Trail across northern Nebraska

Thursday, June 29, 2017; from Mulberry Bend on the Missouri to
McKelvie National Forest, near Valentine, Nebraska

Late in the night I awakened, and noticed the fireflies were now at rest in the long grasses, and quietly glowing, as they do, after a long night of firefly revelry.  I had forgotten that about fireflies, not having seen them for so many years.  Returning to sleep, I awoke with the dawn, just in time to photograph the rising Sun, through the trees across the waters of the Mighty Mo.  Two rabbits came out, nibbling grasses while I was eating my breakfast, and as I watched them a third tinier one gingerly joined the breakfast club.  The mid morning was spent squaring away the truck, finding places to tuck equipment into and making the travelling arrangements more efficient.  Later I watched the Martins on insect patrol over the river, and identified a Catbird, and Eastern Kingbirds … I had not seen a Catbird since I was a lad in northern Wisconsin. 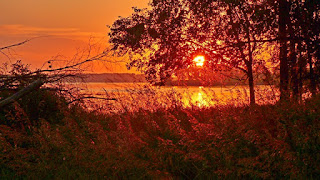 Three miles south I picked up State Hwy 12 going west, and followed it all day to Valentine, winding through the Nebraska hills within 10 miles of the South Dakota border to the north.  The journey began as yesterday, all green and rural, but within 40 or so miles, about the time I was entering the Santee Indian Reservation, the country began to feel like the West, and that feeling continued to strengthen the rest of the day, save for a 10 mile stretch just west of Spencer, where it looked like Iowa, all flat and agrarian.  Listening to the radio I was aware of heavy storms to the south of me, and I had noticed cumulonimbus clouds building to the north while I had been still pottering about on the Missouri River, at Mulberry Bend.  Golf ball sized hail was predicted for the southern storms as they moved through eastern Nebraska and on into Iowa, but although I could see thunderheads off to both north and south, nothing of the kind was threatening my chosen route of travel.  Outside of Lynch, NE, I took a photo or two, of the clouds off to the south.


A few miles before Valentine, at Fort Niobrara National Wildlife Reserve, I spotted my first Lodgepole and Ponderosa Pines, thus confirming I was in the West.  Incidentally, Hwy 12 is called the Outlaw Trail, for no apparent reason that I could see other than it evokes the frontier days of yore; it is a State of Nebraska scenic byway, so I expect they needed to call it something and this seems apt, and confirmed my feeling of being in the West, as mentioned earlier.  The Outlaw Trail ends at Valentine; I had been on it the entire way from last night’s campsite, save  for the first three miles.


Petrol and ice was purchased at Valentine, and I proceeded to look for a couple of free campsites I had noted on my Free Campsites App, but to no avail; I had bars on my phone, but no internet connection; I didn’t know this was possible.  Up until now, whenever I have had a phone connection, I have also had internet connection!  Thus I was unable to refer to the App to fine tune my route and never found the possible campsites.   After travelling 20 extra miles on two sides of a triangle I ended up on State Hwy 97, at Merritt Reservoir State Recreation Area, right next door to Samuel R. McKelvie National Forest, which is really rolling hills grassland.  There were a couple of pay to camp sites on the reservoir, but I prefer to disperse camp for free on Federal land, so a few miles into the Forest, I found a spot on a forest road off a forest road just before sundown, and settled in for the night, greeted by several yowling coyotes off to the west, under a fat crescent Moon.